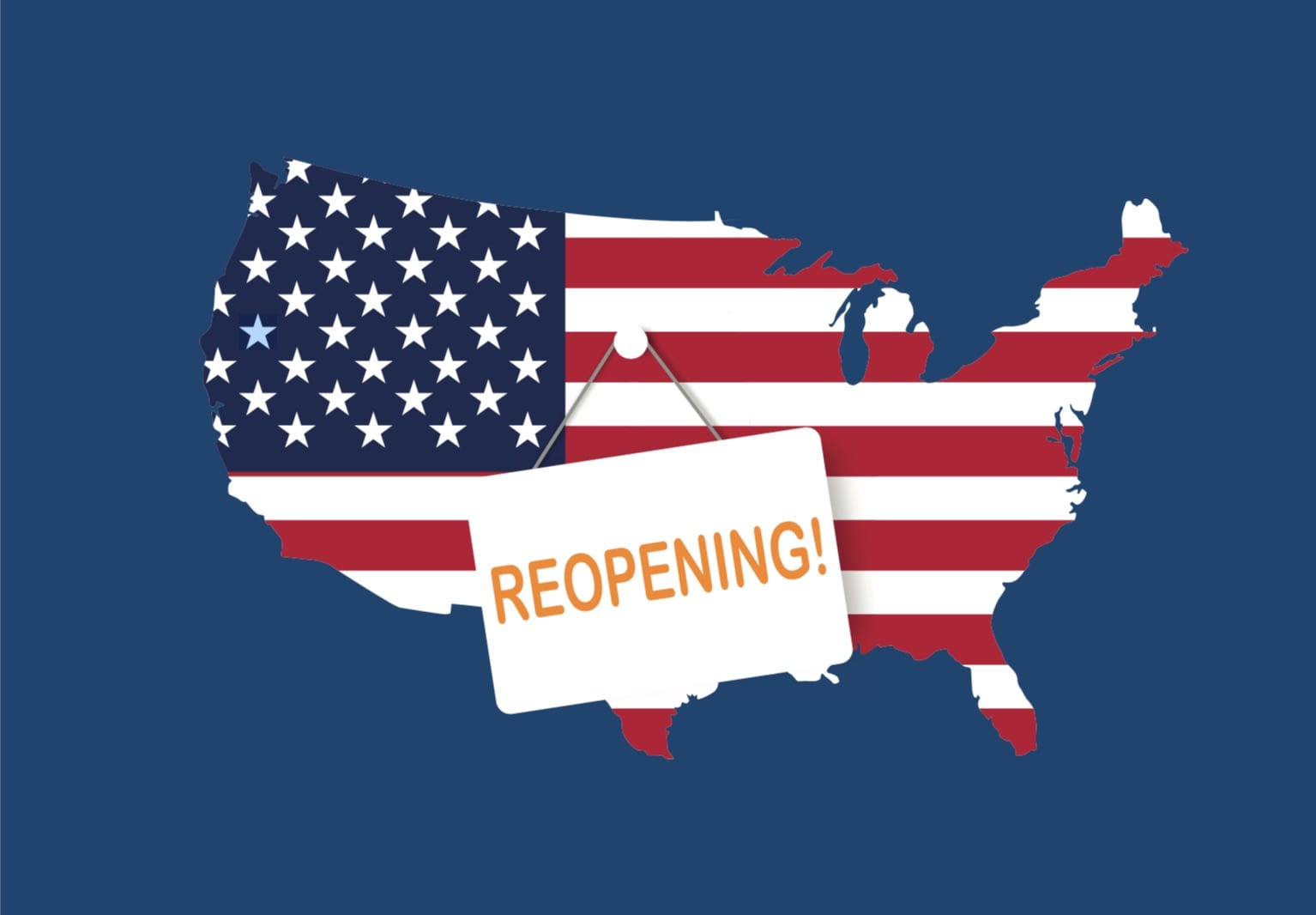 There will likely be a reopening of our economy on the very near horizon. And this reopening will be much sooner rather than later, with full acceleration within just a few months, perhaps even weeks. Here’s why. Problematic coronavirus testing issues may fast disappear as critical preconditions to reopening the economy. Testing issues won’t go away; they are simply likely to be left largely unresolved. In addition, new reports suggest that infections may be much, much more widespread than most had thought, which, in turn, means that there is a strong likelihood that we have much, much lower death rates from the coronavirus in all age groups. While most working people (not sheltered in place) may get the virus, the death rates for the entire population may turn out to be not much higher than the seasonal flu. For younger workers under the age of 60, mortality rates, which are already very low, will drop even lower.

Here’s the analysis supporting this reopening. According to a number of recent reports, the true infection fatality rate from the coronavirus for the entire population may well be much, much lower than had been previously thought, perhaps in the range of about 0.12 percent to 0.2 percent. At the high end in that range, if there’s an eventual infection rate of, say, 50 percent for the entire U.S. population, that’s a death toll of about 330,000 people. Most of these deaths, though, will likely to be of older Americans above 60 years in age. Older folks have much higher coronavirus mortality rates, perhaps 10 to 20 times higher than younger age groups. Actually, data now show that Americans over 55 may account for well more than 90 percent of all deaths from the virus. Looking at comparative data on death rates by age, we are not actually “all in this together,” though that’s a nice sentiment. Of course, this isn’t a big secret, and awareness of this reality grows as each day passes. It’s evident every day on our streets, in our parks, and at the widespread protests across the country for reopening the economy.

Serious problems with testing portend a much earlier rather than later reopening.

Of course no one really knows what the ultimate rates of infection and death will be in this country. Also, we might find vaccines and treatments down the road. The future, of course, is very much uncertain. In the short term, though, the death rate is certainly likely to be much higher for our aging population and our younger virus-vulnerable populations. Our black population, young and old, might be particularly hard hit due to the high incidence of hypertension and diabetes. Similarly, young and old Hispanics may be hard hit for those without the benefit of work-at-home jobs. Similarly, our less affluent workers seldom have the luxury of working at home and most live from paycheck to paycheck. They simply need to work. Older folks and these more vulnerable groups will be advised to continue to shelter in place and to wash their hands a lot. Those who can’t do so will either receive financial support or simply return to work and take their chances. That one’s a toss-up right now.

Serious problems with testing portend a much earlier rather than later reopening. This seems counterintuitive, but this is the situation now unfolding. There have been numerous reports in recent weeks on the unreliability of testing due to high rates of false negatives. Recent data also show an unexpected and increasing number of problematic “asymptomatic” infections (perhaps a large percentage of all infections in younger people). This is one reason virus infection rates appear to be rising. Another emerging testing issue is the potential for second, and perhaps even third, reactivated infections in persons who were thought to have recovered and who had previously tested negative for the virus. Reactivated infections are now showing up in South Korea, China, India, Japan, and recently in the United States. If unsolved, these testing issues portend very widespread infections. With this virus we always seem to be slightly behind the curve.

Think about the task of solving all those complex and related testing issues as a precondition to “safely” reopening the economy. We may likely go nowhere fast. The reality is that we now have a tsunami of complex and difficult testing questions on the table, and they may not be solvable in our near future, at least to the extent of preventing widespread infections in our communities. It’s possible that our big-tech innovators and biotech researchers might use their talents and data analysis skills to solve these testing problems. Anything is possible, but that seems unlikely in the short term of the next few months. Once these testing issues are widely perceived as not realistically solvable in the near term, there will likely be enormous pressure to reopen the economy.

There are also the medical, and myriad other non-economic, costs of maintaining the lockdown. In places where the virus has spread, the overall death tolls are rising significantly, much more than the recorded coronavirus deaths, which may be due, in part, to an as-yet-unknown number of deaths resulting from the overburdening of medical facilities or people not seeking medical treatment. This view, of course, will just add fuel to the fire of the growing “herd immunity” call for a fast reopening of the economy.

Once these testing issues are widely perceived as not realistically solvable in the near term, there will likely be enormous pressure to reopen the economy.

In these circumstances, if the economy is aggressively reopened, infections will likely become widespread, but deaths in younger healthy workers (under 60) may be comparatively few. About 90 percent or more of coronavirus deaths will likely be among our aging and vulnerable populations. This one is easy. The argument here will be simply, “We all just need to get back to work and get the economy moving again. How long really can we wait?” I’ve heard that argument already, and so have you. And, frankly, I’m not sure I have a really good response.

If the emerging data continue to show very low mortality rates and if testing issues appear unsolvable in the weeks ahead, our choices may be constrained by the lack of other really good policy options. It seems inescapable that in opening our economy in the months ahead, our old folks and vulnerable groups will be our front-line troops in the battle. They are already. This all may become our country’s emerging policy reality, soon favored by the movers and shakers of our world as well as by our ordinary workers. The policy certainly will have undeniable and widespread appeal to those not yet old or vulnerable. It also will have great appeal to workers, both young and old, who simply can’t afford to shelter in place without a regular paycheck. This one also is easy. The call to aggressively reopen the economy already is occurring (even without these new supporting data points), and looking ahead it seems likely that this view will carry the day. Soon, we may all be back (well, not really all of us) on the road to business as usual, no doubt riding high on the wave of an expanding economy. Older folks and our vulnerable groups won’t exactly be put out and left on the ice in January, but they will be largely left to take their chances sheltering in place or having to work while infections are widespread in their communities.

The costs of aggressively opening our economy will likely be viewed by the vast majority of people in the country as tragic and regrettable. The costs, nevertheless, will likely be weighed as acceptable under these circumstances. After all, we killed more people on our roads in automobile crashes than the number of all our soldiers killed in battle in all of America’s wars combined. We did it consciously by accident for years and all without so much as batting an eye. This is an easy one again. We all know about how cost-benefit analysis works these days, and there seems to be a growing bottom line consensus that, to twist an old canard, “The business of America today is still very much business.” There will assuredly be some initial safeguards (amid, I suspect, a great deal of virtue-signaling), but the emerging reality will likely be that initial safeguards soon fall by the wayside — perhaps a final example for our less fortunate brethren of how creative destruction can work in a market economy.

This is the way the wind blows now, and our seemingly inexorable move to aggressively reopen the economy likely will soon fill its sails with the new emerging data points discussed above. It’s all a sticky wicket if there ever was one. But if we are not careful, and we play this one wrong, there surely will be hell to pay, and we will have only ourselves to blame. We now need, more than ever, some very good planning, good research studies, genuine respect for others, and common sense and enforceable safeguards for protecting our old folks and the vulnerable among us, along with hope, humility, and a lot of good fortune. God help us! That’s a long list.

We will, I think, be moving in the next few months toward a “full-steam ahead” reopening of our economy.  Lower death rates will fan the fire for reopening, and unresolved testing issues will be, if not actually ignored, at least put on the back burner — necessarily postponed for resolution another day. On the not-too-distant horizon, our economy may end up booming again. If and when that happens, it will be a time for joy and celebration in this country. Of course, if you are over 60 or a person vulnerable to the virus, you probably won’t actually be joining that party. Instead, you may want to start battening down those hatches and getting ready to hold tight. You’re probably going to be in for one (and perhaps more than one), long, wild, and crazy ride.

Edward Ziegler is a retired Professor of Law and holder of the Robert B. Yegge Memorial Research Chair in Law at the University of Denver Sturm college of Law. Visit edwardziegler.com or email eziegler@law.du.edu.