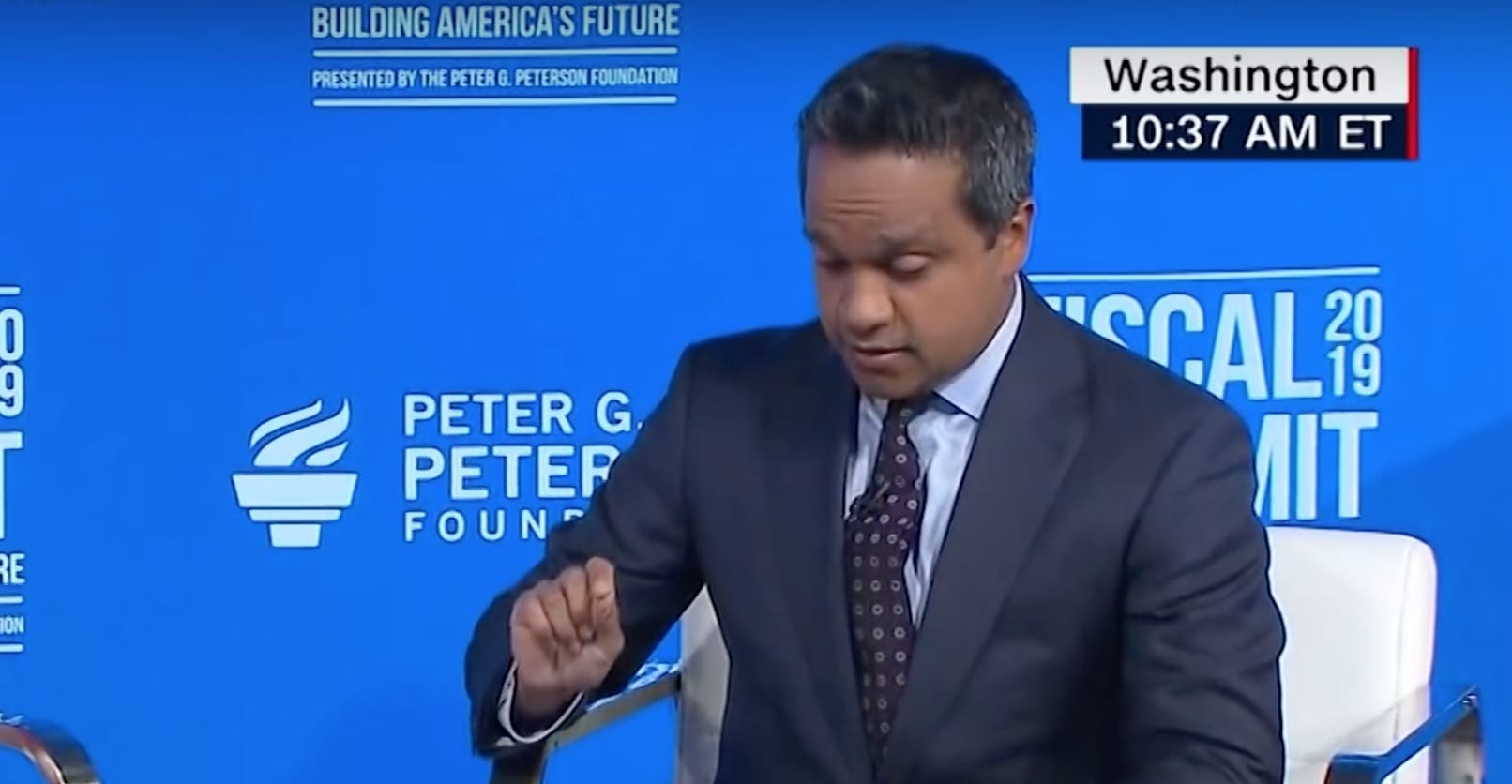 Trade secret: We in the news media often hate the media, too.

The topic was supposed to be “fiscal sustainability” — a Washington phrase for curbing spending and slowing the growth of the $22 trillion debt.

Deficit spending affects every American in the pocketbook. The federal debt is an IOU that amounts to $49,000 for every man, woman and child in America. Still, Raju barely touched on the subject.

The CNN reporter began with a question about President Donald Trump’s remarks from Normandy, where world leaders had gathered to commemorate the 75th anniversary of D-Day. Trump — reacting to a Politico report that Pelosi told her caucus she wanted to see Trump “in prison” — told Fox News’ Laura Ingraham that Pelosi was a “nasty, vindictive horrible person” and a “disgrace.”

“What bothers me is that we’re talking about that instead of how to reduce the national debt,” Pelosi responded, as she criticized Trump for being overly political while overseas.

Raju followed up with a question wondering how Pelosi can work with someone who insults her. “I just consider the source,” Pelosi countered.

Here’s the short version of Raju’s other questions: Do you think Trump should be in prison? Why aren’t you for impeachment? Would you support impeachment if the majority of Democrats supported impeachment? You believe he committed crimes in office, right? So isn’t it your obligation to pursue impeachment?

When Raju asked about Trump’s threat to impose tariffs on Mexico, Pelosi offered that she would have declined to come to the event if she had been invited to discuss Trump. The audience clapped in approval.

Around minute 18, Raju asked: “Right now, the debt is like $22 trillion. How come dealing with the national debt in a serious way is not a bigger priority with this Congress?”

It was an odd question coming from someone who didn’t think the debt was important enough to address in the first half of a talk that was supposed to be about the federal government’s unsustainable spending trajectory.

Pelosi faulted the Tax Cuts and Jobs Act, passed by the GOP Congress and signed by Trump in December 2017, for adding $2 trillion to the national debt over the next 10 years. Indeed, the Congressional Budget Office predicted the measure would increase the projected deficit by $1.9 trillion through 2028.

When Raju asked Pelosi if she supports “Medicare for All” and the New Green Deal — the latest fashion in left-leaning policy — Pelosi responded, “Everything is on the table to be reviewed, but what I do support is pay as you-go.” Pelosi did not offer exactly how she would pay for those massively expensive programs. But at least there were two spending questions in the half-hour debate.

Otherwise, there were so many things not to like — the obsession with Trump, a clear bias against the president and the usual lack of self-knowledge about exactly how off the mark this approach appears to the news-consuming public.

And there was the cheesy pursuit of a sound bite to “make news” on the story of the day, which is always Trump. And the big revelation? As CNN hyped it, “Pelosi: Impeachment is ‘not off the table’“ — as if that is news to anybody in America.

It was frustrating to watch because the summit provided an opportunity for follow-up questions — an opportunity unavailable to reporters during White House pool sprays and departure gatherings, where the best one can do is shout a question that reaches Trump’s ears and awakens his fancy.

Also at the summit, CNBC’s Eamon Javers managed to squeeze hot news topics into a meaty half-hour exchange with acting White House chief of staff Mick Mulvaney. Since Trump took the oath of office, the national debt rose from $19.9 trillion to more than $22 trillion. The 2019 deficit is on track to exceed $1 trillion.

Prompted by Javers, Mulvaney admitted he did not know whether the administration could get the annual deficit below $1 trillion while Trump is in office.

It was a chilling admission about out-of-control spending that will haunt the taxpaying public for years to come.