by Doug Bandow
Hugging President Obama before his final State of the Union, Jan. 12, 2016 (Cameron Carnes/Shutterstock.com) 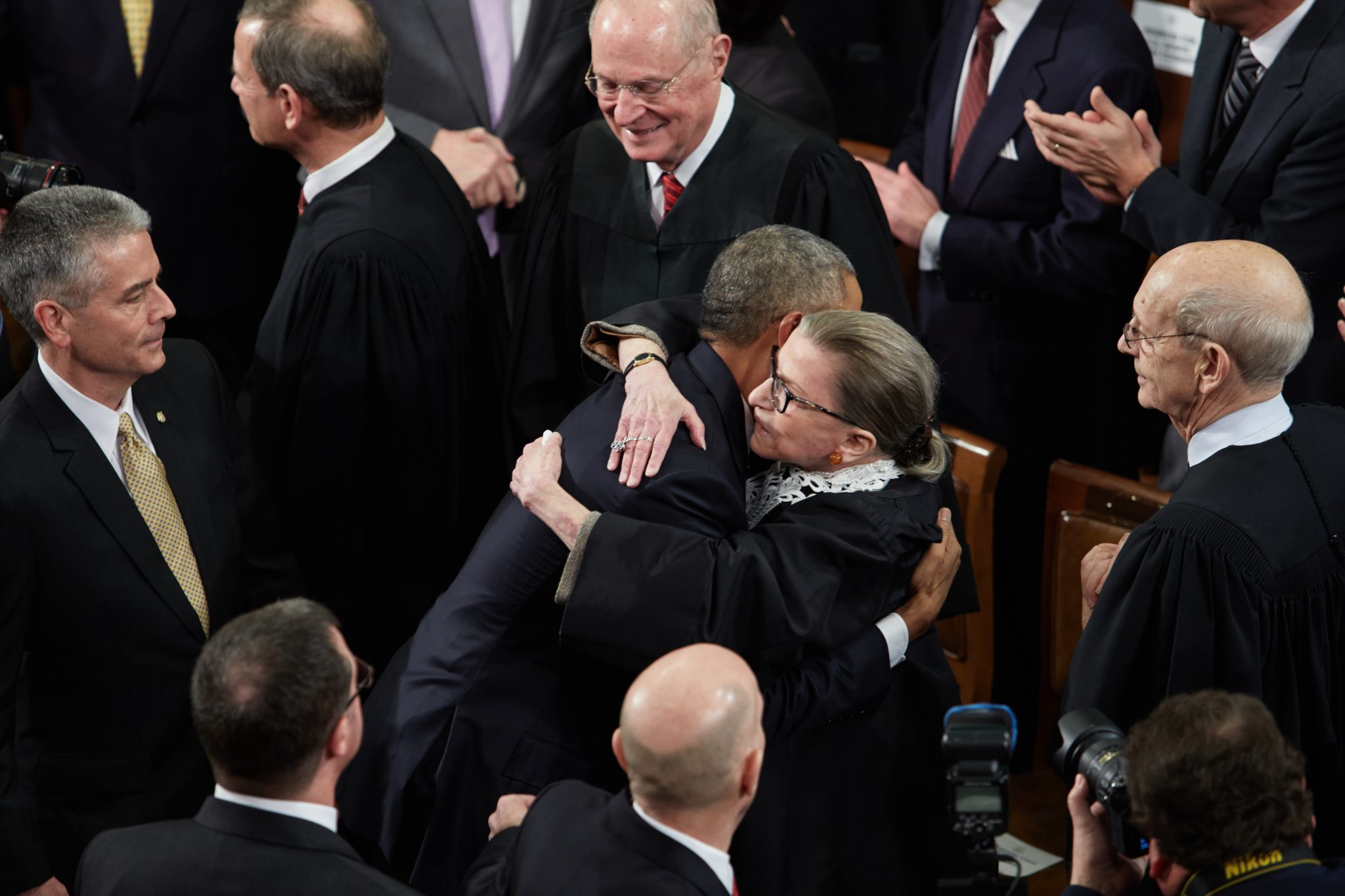 As news of the death of Ruth Bader Ginsburg spread, the left-wing Twittersphere exploded. Ginsburg was widely seen as single-handedly holding back the bloodthirsty, reactionary, Trump-crazy hordes. The Independent’s Holly Baxter lamented, “Sometimes it felt like she was America’s last hope.” Ginsburg’s passing loosed fear, frustration, anger, and defiance among the liberal legions.

The politics of her replacement immediately dominated their thoughts. Many cited as holy doctrine her comment, reported by her granddaughter: “My most fervent wish is that I will not be replaced until a new president is installed.” Others insisted that if Senate Majority Leader Mitch McConnell had a shred of decency — which they all agreed that he obviously did not — he would not seek to fill her seat before the election. Many remained traumatized over the failure to confirm Merrick Garland and losing “their” seat.

In fact, it is sad that a life so well lived did not benefit from even the shortest decent interval before considering the politics. Ginsburg was smart, determined, principled, resilient, and decent. A pathbreaker at a time when women were rare in the bar and on the bench, she was warm and collegial, her friendship with Antonin Scalia gaining particular attention. They could engage in rhetorical battle in the morning and attend opera together at night. The ability to not only respect but befriend those with whom one profoundly disagrees is something to be treasured.

However, the politics is impossible to ignore. And the fault lies with the Left. Marxists of all sorts never viewed the courts as anything but tools of oppression that had to be manipulated to advance the revolution. Alas, modern liberals also abandoned fidelity to the rule of law in reality if not rhetoric. Their commitment to a “living constitution” — the evolving meaning of which depended upon any number of factors, including, it sometimes seemed, sunspots and the phase of the moon — turned them into politicians and the courts into continuing constitutional conventions.

Indeed, the game was hopelessly rigged. Liberal jurists would make a dramatic advance toward presumed human utopia. Then they would insist that judicial conservatives respect precedent and make the ruling permanent, immune from reconsideration. In this way the legal ratchet worked only one way. The problem was reinforced by the Left’s control of the legal academy, which produced the jurisprudential gibberish that aided and augmented the march of the judicial Left.

This process required those who believed that the Constitution was supposed to mean something to pay close attention to the philosophical vision of prospective nominees. If both sides believed that they were determining rather than making law, interpretive differences would not be so great. But that is no longer the case. So appointments are not interchangeable. Leaving a vacancy for those who don’t believe the basics, that judges are supposed to act like, well, judges, is no option.

So President Donald Trump and GOP legislators have no choice. If they are faithful to their oaths of office, they must nominate and approve a new justice. Ginsburg’s supposed judicial last testament was politics, not principle, as was her determination to retain her seat even unto death. Had the president been Barack Obama, one doubts she would have said it and her granddaughter would have reported it. Nor would the Left have paid it the slightest attention. The law requires that her position be filled, the timing of which is not her decision. Imagine the left-wing derision had Scalia voiced similar sentiments.

As to confirming a justice in a presidential election year, McConnell says there will be a vote on the president’s nominee. The Left professes to be shocked, shocked at his rank hypocrisy, but no one could imagine that either side would let consistency get in the way of smart politics. Is there any American who seriously believes that Democratic Senate leader Chuck Schumer (or Harry Reid before) would forgo putting a solid liberal vote on the Supreme Court if given the opportunity? The claim is beyond risible. Schumer made the obligatory tweet: “The American people should have a voice in the selection of their next Supreme Court Justice. Therefore, this vacancy should not be filled until we have a new president.” However, flip the situation around and Schumer would have spent last night on the phone plotting confirmation strategy.

The possibility of a lame-duck session gives McConnell more time and thus options. He might try to finish the entire process by November 3. Or he might decide to hold hearings before the election with a vote scheduled afterwards. A committee vote would force Democrats to take a position. Holding off on the final floor fight would allow vulnerable Republicans to feign indecision.

Despite the GOP majority, however, there is little margin for error. Both Sen. Susan Collins, up for reelection, and Lisa Murkowski have said they would not vote to confirm a justice right before the election, though they said nothing about a lame-duck session. If Martha McSally loses, and she has consistently trailed in the polls, Democrat Mark Kelly might be sworn in early since the contest is to fill the late John McCain’s term. Lose three votes and Vice President Mike Pence might have to break the tie.

The overriding priority for Trump and McConnell should be to fill the vacancy. Second should be to protect vulnerable senators. What is the right mix? For instance, Collins also is behind and her previous votes on court nominees have hurt. Maybe extending the process would help her.

Whom will Trump choose? There are many well-qualified candidates. Considering the politics, however, Amy Coney Barrett is the most obvious, and perhaps only, choice. (Another Circuit Court judge, Allison Jones Rushing, has been mentioned, but her background is less compelling.) Make the Democrats oppose a woman. Dare the Left to try the politics of personal destruction against a mom — whose kids include two adopted from Haiti and one with special needs. Allow ideological radicals to showcase their contempt for the Catholic faith. Challenge the scorched-earth crowd to manufacture a purported scandal for Barrett. As Scott McKay put it, “Make Amy Barrett happen, Mr. President. Don’t think twice, don’t wait.”

What will the impact be on the race? It likely will help Trump. A good choice, such as Barrett, should improve his image with suburban women, while setting Democrats up to offend the same voters by opposing and possibly trashing the nominee. Moreover, a court fight will remind Republicans disillusioned with Trump for all sorts of good reasons of what is at stake, and how they remain more comfortable with the Right than the Left. The confirmation battle could offer similar benefits to senators in tight reelection races.

Of course, nothing is certain about such a highly charged process. Existing plans might not survive the first political skirmish. Republicans should expect surprises.

My recommendation? Hold hearings and then await the election results. If Trump wins and the GOP holds its Senate majority, put off the vote until the next Congress, which takes over in early January. That would undermine charges of having “rushed through” the appointment. If either Trump loses or the Republican Senate majority vanishes, then “rush” without hesitation and confirm the next justice after the election during a lame-duck session.

A sense of entitlement consumes some on the left. They insist that they are owed two seats if a Ginsburg replacement is confirmed. Some have proposed adding two new seats to get their “fair share.” Erwin Chemerinsky, Dean of UC Berkeley Law School, urged Democrats to threaten to expand the size of the high court to 13 members if Republicans fill the Ginsburg vacancy. Sen. Edward Markey (D-Mass.) said that Democrats, if in the majority, should respond to a GOP confirmation vote by ending the filibuster and increasing the Court’s membership.

However, there is no reason to believe that the Left would forgo such moves, assuming they had the votes, if Republicans generously left the seat for Democrats to fill. Believing the judiciary to be “their” branch, progressives have been bewailing the fact that Trump has been filling vacancies and doing so with decided non-liberals. Left-wing activists have been campaigning to blatantly pack the Court without reference to Ginsburg. If Democrats win big there will be immediate proposals to fill the Supreme Court, at least, and perhaps other federal courts with the magic Constitution crowd, who believe that the law means whatever progressives happen to intuit, feel, sense, or imagine at the moment. Which in practice means that America’s founding document from more than two centuries ago would institutionalize every left-wing nostrum that the public has rejected since America’s founding.

As if the presidential race could not get more tempestuous, Ginsburg’s death has added another unpredictable, though not entirely unexpected, factor. Given how the Supreme Court has turned itself into a policy-making body without the least shame over arrogating the constitutional role assigned to the legislative branch, the GOP president and Congress cannot in good faith fail to take up the political challenge presented.

Still, along the way Washington’s political pugilists should pause to honor Ginsburg. She was a worthy judicial adversary and fine person. In many ways her service harkens back to a better, more cooperative past — only three Republicans voted against her nomination in 1993 — that has disappeared, perhaps irrevocably. It is unfortunate that her talents were not used in a better cause.

However, such sentiments, though heartfelt, should not long detain us. There is a confirmation battle to win. That fight opened the moment she passed. The Left has shamelessly turned judges into partisan operatives, tasked with writing preferred policy prescriptions into the Constitution. And judging the rightness of the jurisprudence by the leftness of the results reached. The future of the republic really is at stake.

Doug Bandow is a former Special Assistant to President Ronald Reagan. A graduate of Stanford Law School, he is a member of the California and D.C. bars. He is the author of several books, including The Politics of Plunder: Misgovernment in Washington and The Politics of Envy: Statism as Theology.