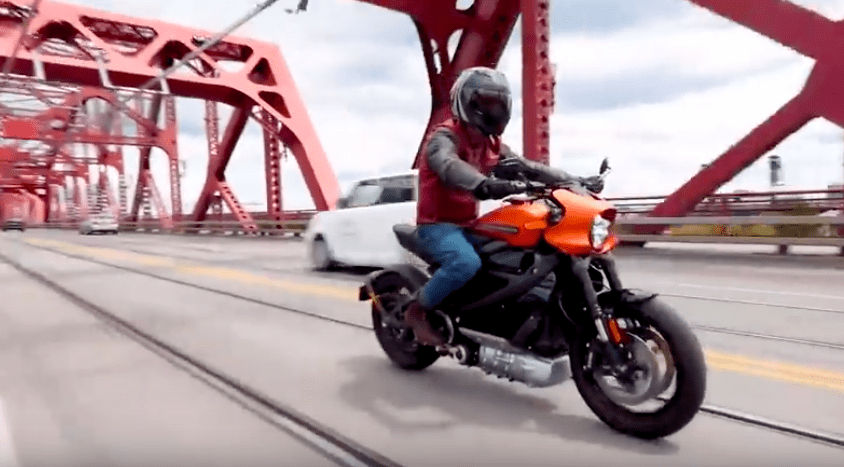 People aren’t getting much of a charge out of Harley’s first electric motorcycle, the LiveWire — literally.

Owners — and there aren’t many — have been advised by Harley Davidson not to plug their bikes in at home or anywhere else except a Harley Davidson dealership, where “special equipment” is available.

This means the LiveWire’s already limited radius of action — due to its being electric — is now limited to no more than about 70 miles away from a Harley dealership. The there-and-back trip amounts to the LiveWire’s maximum best-case range of about 140 miles — italics to emphasize the fact that best case assumes low-speed, “urban” use. On the highway the bike’s actual range will be considerably less.

Once you’ve made it to there, you’ll wait for about an hour while your bike recharges on the dealership’s “special equipment.”

But what if you’re not within range of a Harley store?

What if you haven’t got an hour to kill?

So much for the freedom of the open road — which is what Harleys used to be all about.

Now HD is about something else.

Apparently, that something else is selling something other than a motorcycle — to people who don’t like motorcycles.

And something that isn’t a Harley.

Harleys make noise, first of all. The LiveWire — being electric — is silent. Motorcycle people and HD people especially like to hear their bikes. And to feel them. An electric bike doesn’t vibrate.

Which — for Harley people — is like a sundae without the ice cream.

But Harley seems to think Harley people are yesterday’s people; that Generation Soy wants a silent bike that doesn’t go very far — like an electric car.

But people can be forced to buy electric cars because most people have to have a car — to get to work, to live. Almost no one has to have a motorcycle.

And what person who likes motorcycles would want one of these overpriced, underperfoming gimps?

Harley has halted production and won’t deliver any more LiveWires until the recharging problem has been sorted out. But the company has a a bigger problem — and it’s essentially the same problem that is belly-flopping electric cars, only it’s worse because we’re dealing with bikes.

Which almost by definition are indulgences rather than necessities. People buy them for fun primarily and for transportation secondarily. Almost everyone who owns a motorcycle also has a car — because it rains and it gets cold and sometimes it’s too hot to ride or you just don’t feel like it.

Most people haven’t got $30k extra laying around to spend on a bike that costs more than a car.

There are a few people who spend $30k on bikes, but most of those are the age 50-plus people who are Harley’s traditional and aging-out demographic. They are also exactly the people least likely to be interested in an electric sport bike with short legs, no storage, and not even a passenger seat for the Old Lady.

They want a long-range cruiser with the legs (and bags) to handle a cross-country trip.

The young and “diverse” crowd — Generation Soy — that Harley says it wants to attract with this next-to-useless bike can’t afford to spend $30k on a bike that’s only good for short hops.

An electric motorcycle that hasn’t even got the “sell” of much lower fueling costs that an electric car can tout.

A Hog costs almost nothing to gas up. The worst of them still gets better mileage than almost any economy car (40-plus average), and most get better gas mileage than a hybrid car (50-plus). Some middleweight bikes — in the 650cc range — easily average 60, and commuter bikes with 250cc engines can deliver 80 mpg.

Most take about 3.5 gallons of $2.40 unleaded gas to fill up. And cost tens of thousands less than the LiveWire.

You do the math.

An electric bike offers no economic advantage to Gen Soy while being of no interest to people who like motorcycles.

The LiveWire eliminates practically every reason for owning a bike. Including the sound. A silent Harley is like a cat that doesn’t purr — or won’t chase mice.

No rumble, no vibration — and almost nothing to do.

An electric motorcycle isn’t even a motorcycle — if that term means something different than scooter.

Motorcycles have transmissions and gears and a clutch as well as engines that rumble and bellow. The rider syncopates the action, which is part of the art as well as the appeal.

Scooters have a grip you twist to make it go faster.

The rest is mostly just sitting there. It’s “gay” — in the South Park, Cartman sense.

And scooters have the upside of being very cheap; you can pick one up for less than $5,000 — a $25k discount over the LiveWire — and the scooter has more range and doesn’t have to go back to the dealership for a recharge.

Motorcycles are also fundamentally about spontaneity, which is an aspect of the fun and so part of the point. But it’s hard to be spontaneous — hey, let’s saddle up and ride over to Jim’s place … two states away — when you’re tied down by a power cord.

It’s not much fun to have to restrict and plan your travels accordingly.

And bring back a gallon.

You can’t bring back a gallon of volts.

Sigh. At least you can push your LiveWire to wherever the charging hub is — one of the few upsides of the electric bike versus the electric car, which is much too heavy to push.

But why would you want to?

The whole thing is equal parts ridiculous and sad.

That the people running Harley — including its female chief operating officer, Michelle Kumbier — no longer understand what motorcycles and Harleys are all about tells you all you need to know about the future of Harley.

The brand will live on — in memory — like other great names that now sleep with the fishes.