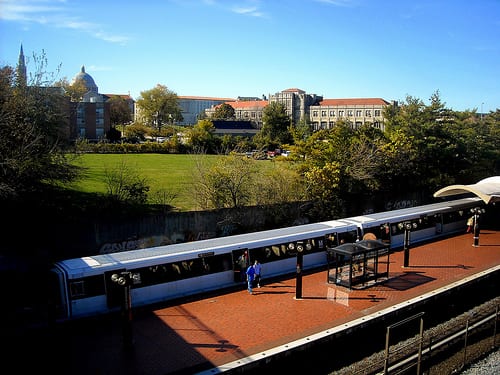 Last month I wrote about the reported predatory behavior of Monsignor Walter Rossi, the director of the Basilica of the National Shrine of the Immaculate Conception in Washington, D.C., a position to which he had been appointed by the pedo-rapist Cardinal Theodore McCarrick in 2005. Bishop Michael Bransfield, who is under investigation for predatory gay behavior, had recruited Rossi, a priest from Scranton, Pennsylvania, to join the Basilica staff after he completed a canon law degree at Catholic University.

A number of alumni from the Catholic University of America (CUA) have told me that Rossi “hit” on them and “groomed” them. In one case, I was told, Rossi asked a CUA student about his gay roommate (with whom Rossi was overly familiar) and insinuated that the three of them should get together for group sex.

“Rossi is a gay sexual harasser of CUA students,” said this alumnus to me. A professor of theology at CUA, C.C Pecknold, has responded to the concerns my article raised among mothers and fathers with sons at CUA: “I do think the allegations against Msgr. Rossi should be investigated by the Metropolitan, but important to remember that [the Basilica] is institutionally independent from the University and not under our purview. Mr. Neumayr paints with too broad a brush.”

Actually, the strokes of my brush have never been more precise. Rossi sits on CUA’s Board of Trustees. Yes, Rossi’s long history of gay misconduct and gay sexual harassment of CUA students is a matter for Wuerl (and Rossi’s actual superior, the bishop of Scranton, where he was ordained). But surely it is a matter for the university. Or is CUA’s board okay with a board member who asks CUA students for threesomes?

Last Saturday, I saw John Garvey at the Mayflower hotel. He is the president of Catholic University. He had previously worked as a dean at Boston College Law School, where he sparked criticism among orthodox Catholics by siding with the Jesuit school’s LGBT-promoting faculty in a controversy involving a scorned faculty member who opposed gay marriage. It is hard to imagine Garvey dithering over whether or not to an investigate a member of his board who was accused of hitting upon female CUA students. But in Rossi’s case it appears that he is dithering, and that he certainly doesn’t want to answer questions about a potential investigation into Rossi’s conduct.

I said to Garvey civilly, “Can I ask you a question?” Ever the slithery charmer, Garvey patted me on the arm as he said, “No, you can’t, George,” and walked away.

Can it really come as a surprise to Garvey that a journalist is looking into the scandalous tenure of Monsignor Rossi, a protégé and hire of the biggest predatory gay cleric in American ecclesiastical history? The predatory gay web around McCarrick could not be more obvious. McCarrick presided over a culture of outré behavior in which the Bransfields and Rossis could pursue gay double lives with impunity.

After I reported last month that Rossi owns a self-described “sex pad” in Fort Lauderdale (a CUA source overheard Rossi describe his condo in those terms), which bills itself as the “LGBT capital of Florida,” a well-placed source within the Church on the East Coast contacted me to confirm my account. (I had reported that Rossi co-owns the condo with a priest from Scranton, Fr. Andrew Hvozdovic.)

“We all know that Rossi and the priest with whom he owns that place are an old gay couple,” said this source. “That priest’s nickname is Randy Andy among the other priests because he is so openly gay. Above the toilet in his rooms in the rectory hangs a gay beefcake soccer calendar. He has photos of himself with Rossi looking like a married couple, and people have seen them walking the beach in Fort Lauderdale together in speedos. The gay nickname for Walter Rossi among Scranton priests is Wanda.”

But their relationship is open, and Rossi has collected various lovers over the years, according to multiple sources. Some of those lovers were plucked from the ranks of CUA’s student body, such as the absurdly checkered Matthew Riedlinger, according to one of these sources: “Riedlinger was a homosexual who had been kicked out of the seminary in Ohio. He then turned up at Catholic University. Riedlinger would brag about his sexual relationship with Rossi, who helped him become a priest in the diocese of Trenton.”

Trenton Bishop John M. Smith, a crony of McCarrick’s (Smith served as an auxiliary bishop to him in Newark), ordained Riedlinger after Rossi’s outrageous string-pulling. Riedlinger would soon leave the priesthood in scandal. In 2013, he got nabbed in an underage sex sting after sending over a thousand texts to a person posing as a 16-year-old male. While this scandal unfolded, Rossi put Riedlinger up at another beach resort condo he owns near Atlantic City in Bringantine, New Jersey. Public records establish that Riedlinger has been registered to vote at Rossi’s Brigantine residence.

Last week, I stopped in Atlantic City to check out Rossi’s condo as I made my way down to Washington, D.C. His condo is at the “Brigantine Island Beach Resort,” though it is not, unlike his place in Fort Lauderdale, right smack on a private beach (between the beach and the resort is a field of plants that takes about five to ten minutes to traverse). Rossi must not use it very often. A postal worker with whom I chatted about Rossi says his mail builds up — and that Riedlinger still gets mail there! Rossi clearly prefers his Fort Lauderdale luxury high rise, where he is “treasurer” on the condo board this year.

“Rossi would groom CUA students,” says a D.C. archdiocesan source. “If they submitted to him, he would reward them; if they didn’t, he would treat them poorly, and if they worked at the Basilica, he would make life miserable for them until they left.”

Imitating his boss McCarrick and his old boss Bransfield, Rossi arrogantly assumed that no member of the faithful would ever dare call him out on his scandalous life. If they could get away with it, he appears to have reasoned, why can’t I?

Yet the day of reckoning approaches. Members of the Gay Mafia, of which that trio is emblematic, have exploited the naïveté and docility of the Catholic faithful for years, who are now wising up to that mafia’s grotesque decadence. The mothers and fathers of young men are mad as hell and they will not take it anymore.