It’s a bit capricious to add economy-changing amendments to bills regulating entire industries, and in general bad for the country. But as long as that’s what Congress is doing, as they work to finish the financial regulation reform bill, this is a good idea: 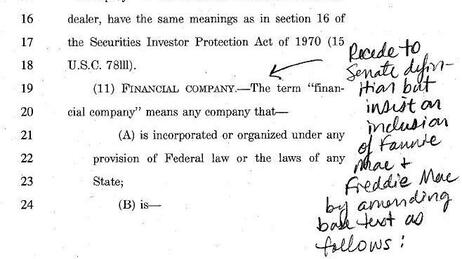 Texas Rep. Jeb Hensarling, according to the WSJ, changed the definition of “financial company” to include Fannie Mae and Freddie Mac. As Politico explains, this means that they would be subject to the same resolution authority that dictates the liquidation process for failing banks. “This process is paid for by the sale of the failing company’s assets and/or through assessments on other financial companies, possibly putting the Street in line to pay for the liquidation of the troubled housing giants.”

That means that the big banks would be on the hook for the estimated $400 billion that Fannie and Freddie were expected to cost taxpayers up until now. That’s an enormous amount of money, for both taxpayers and the banks.

This insertion is a brilliant move by Hensarling — making the big banks bear the costs would go a long way toward undoing the damage done by both the disastrous Fannie and Freddie bailout and TARP (more on that in a later post). Unfortunately, the WSJ also reports that Senate Democrats will take Hensarling’s language out, and that Barney Frank will go along with it. Even if they succeed in removing the provision, though, Hensarling at least has forced the Democrats to demonstrate that they privilege the big banks over the public.