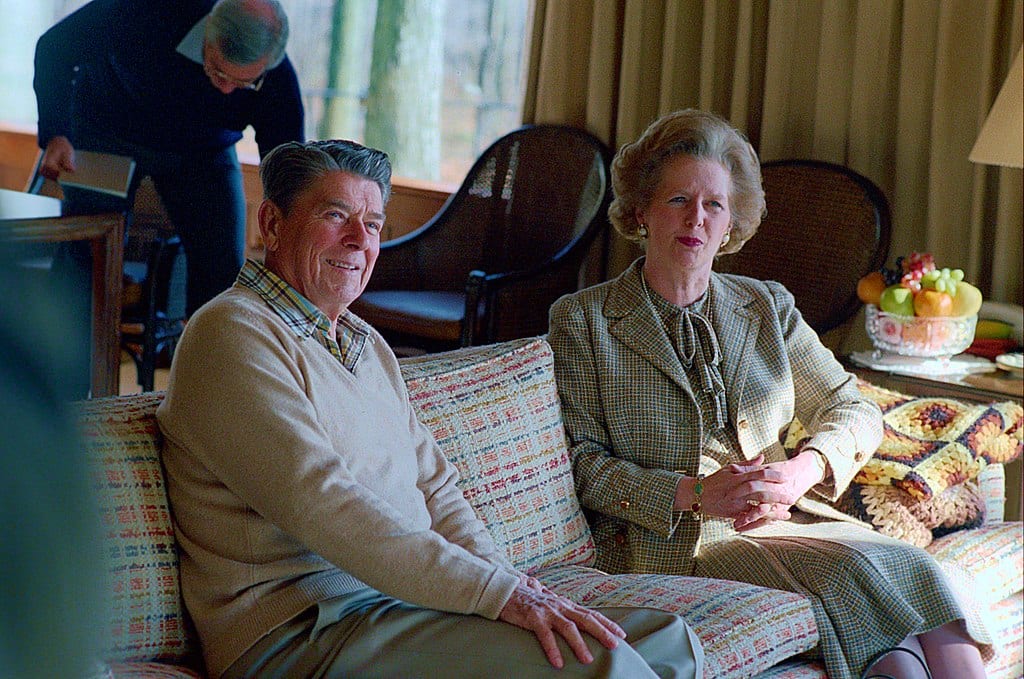 I am rounding the last turn of Charles Moore’s magisterial biography of Margaret Thatcher. It is no sprint. It is not even a distance race. It is a marathon of a literary work, three volumes, thick volumes. Yet, as I have said, it is a masterpiece. Charles loves Mrs. Thatcher. That is not to say he lets her off easy. Charles is too fine a biographer for that, and Mrs. Thatcher is too complicated a subject to escape his critical eye. So he has given us three volumes on the lady who returned Britain to economic health and to world significance. Read it for yourself. 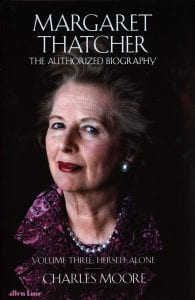 Liberals hate her. Socialists hate her. Even a few moderates or Tories hate her. Why do they hate her with such singular intensity? I believe it is because she diminished the one thing on which all of the above groups have generally agreed. Some have agreed on it more than others, but all have agreed it was essential to Britain’s well-being. What is it? Government.

To those who hate Mrs. Thatcher, government was always there to help. To Mrs. Thatcher, it was usually there to harm, with its inefficiencies, its sclerotic bureaucracies, its grand projects that were usually not needed.

When I first began to visit Britain in the 1970s, it was like visiting an attic in an old mansion belonging to an over-the-hill family. It was quaint, but one could never count on things working. British automobiles, for instance, malfunctioned; usually it was the electrical system. The workers were always on strike. The gentlemen’s clubs were open in the late morning, and an astonishing number of gentlemen were in their cups by 2:00 p.m. They were very amusing in their cups, but by 3:00 p.m. they were snoozing. That all changed as the 1980s rolled along, and Britain became Great again, all under Mrs. Thatcher’s premiership.

The hatred for Mrs. Thatcher — and President Reagan too — is quite startling to anyone familiar with what they achieved. Through similar policies they revived two stagnant economies and won the Cold War. In Britain, Thatcher beat back Arthur Scargill’s unions. One can sympathize, for instance, with a rank-and-file Labourite who had become used to long vacations and even longer strikes, but actually it is not the union worker whom hates Mrs. Thatcher the most. It is the Labour Party’s leaders, the liberal members in politics, the educators, the government bureaucrats, and the malcontents. It is those who think ideologically in Britain, and some Tory members who do not think at all. Some merely hate Mrs. Thatcher because she was a woman.

Hate, after all, has become a matter of pride on both sides of the Atlantic. Some angry-faced punks think it has become a mark of authenticity. Borrowing from Descartes they might say, “I hate, therefore I am.” It is seen as a genuine emotion. This is not to say one has to be male to be proud of one’s hates. Surely Elizabeth Warren is proud of her hates, and Hillary Clinton is a stupendous hater. My guess is that she has to hate with an intensity almost the equal of a white supremacist.

Now, of course, hate is not a particularly helpful thing to have. It does not clarify one’s vision. Nor does it increase one’s determination to get things done. Certainly Mrs. Thatcher is nowhere on record bragging about hating Arthur Scargill, though she did beat him like a drum. Moreover, if one is consumed with hate one often loses control of events. Think of Hillary again. How long people will hate Margaret Thatcher or for that matter Ronald Reagan I do not know. All I do know is that I have long admired both politicians, and after spending three volumes with Mrs. Thatcher I too have come to love her.