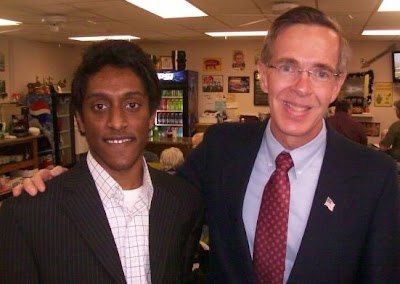 Whenever I introduce Ali Akbar to friends, I usually feel compelled to add the explanation that he’s a Southern Baptist from Texas, which leaves him to relate the backstory: His African-American mother was a college student in Texas when she met and married an Arab exchange student, who subsequently abandoned his wife and son to return to his native country. Given the events of recent years, it is perhaps somewhat ironic that Ali grew up to become a Republican campaign strategist.

Ali’s specialty is New Media, which explains how I met him in October 2009 during Doug Hoffman’s historic third-party congressional campaign in New York’s 23rd District. It was my second trip to the district, and I arrived in the wee hours of Oct. 30 at a rental house in Lake Placid, N.Y., where I had been granted sofa-crashing privileges. The crew in the house were Eric Odom, Steve Foley and Ali — who were working on the Tea Party news site 73Wire — and Yates Walker, who had been brought in by Dan Tripp to run the Hoffman campaign’s Plattsburgh office. There was pizza and beer and we talked until nearly dawn, then got up a few hours later for a trip to Plattsburgh, where Hoffman met at a diner with the mayor who endorsed him. As I said, it was “like reporting a hurricane from the eye of the storm.” RINO Dede Scozzafava quit the race on Halloween morning, and the next day Ali rode with me for the high-speed 120-mile drive westward along Highway 3 to Watertown, N.Y. By the time we arrived, Dede had endorsed the Democrat, Bill Owens. On Election Day, Ali and I repeated our high-speed drive in the opposite direction to arrive at the Hotel Saranac for what we expected to be a victory celebration. It was a tearful moment when Hoffman conceded a narrow defeat, but as he said, it was “worth the fight.”

NY-23 was, as several people said at the time, the “template” for a new kind of campaign operation that combines volunteer grassroots energy with New Media messaging and social networking. Through the subsequent careers of those who joined Hoffman’s crusade (see “Battle Cry in the North Country“), you can trace a straight line from that against-the-odds Tea Party campaign to the Scott Brown victory in Massachusetts, Marco Rubio’s defeat of Charlie Crist in Florida, the GOP mid-term victory in 2010, and on into this year’s special-election victory in NY-9 and the 2012 Republican presidential campaign.

Over the course of the past two years, Ali and I have crossed paths in Boston, Alabama, Nevada, Georgia, Ohio and D.C., and shared a hotel suite during my recent visit to Tampa, Florida, for the Sept. 12 presidential debate. All of which is a preamble necessary to explain that when actor Morgan Freeman accused the Tea Party of racism, my friend Ali was hurt and offended and felt compelled to write an open letter:

Dear Mr. Freeman,
My name is Ali Akbar. I’m a 26 year-old African-American small business owner and a tea party activist. . . .
I idolized you as a boy. Growing up without a father, you were one of the strong black men in my life who gave me a model to follow. Each of the characters you played had dignity and confidence. I tried to emulate the strength you projected. . . .
I’ve attended dozens of tea party events. I’ve helped organize them, and I’ve even spoken at a few. The tea party is not what is often depicted in the news. It is people of all colors who are terribly concerned about the direction that America is heading. We don’t trust big government to make decisions for us. And we fear that the present administration’s spending is going to lead our country down a path to insolvency, much like what Greece is currently facing. . . .
I’m hoping that you’ll come to a tea party in Tennessee – the place of your birth. Really anywhere in the country that works for you; I’ll set it up with the one of the thousands of activists I know around our great country. I’d be delighted to introduce you to good people who will welcome you with open arms, disagree with you, and then feed you some of the best barbeque you’ve ever tasted. . . .

Read the whole thing. And if anyone has any doubts about Ali’s Tea Party bona fides, tell them to get in touch with me — or Doug Hoffman.