American Catholic priests ordained after 2010 are more likely to be theologically conservative and to affirm Church teaching on controversial moral issues than priests ordained in prior decades, a survey published this week found. The survey showed that newly ordained priests have become more conservative for four consecutive decades.

The survey was conducted in 2021 by the Austin Institute for the Study of Family and Culture. It replicated a 2002 study from the Los Angeles Times.

The authors of a report analyzing the study said the dramatic change is likely due to a drop-off in the number of progressive men who join the priesthood. They said that it is unclear whether this is due to self-selectivity or heightened scrutiny of vocations at seminaries and religious orders. After the clergy sexual abuse scandal exploded onto the scene in 2002, many seminaries were more careful with reviewing applicants.

The 2021 survey queried priests on a range of issues, including abortion, homosexual behavior, birth control, and non-marital sexual behavior. The trend line in each case went in the same direction: a more recently ordained priest was more likely to affirm the orthodox Catholic position.

Ninety percent of priests ordained after 2010 said that abortion is always a sin compared to just 56 percent of priests who were ordained prior to 1980. The Catholic Church is a major player in the pro-life movement in the United States, and has devoted considerable resources to the effort, especially following the Roe v. Wade decision in 1973. 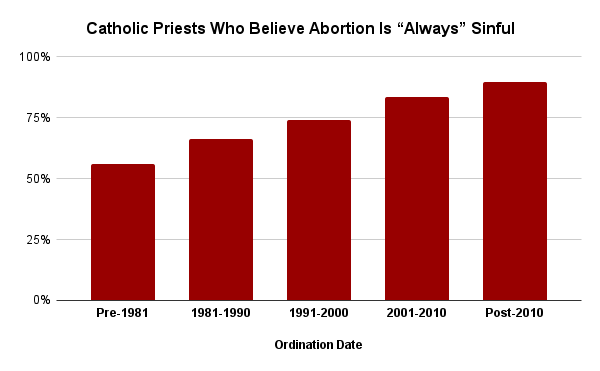 The American Church became more liberal in the 1960s following the upheaval of the sexual revolution as well as the Second Vatican Council, which took place from 1962 to 1965. Reformers in the United States took advantage of the council’s mandate to engage with the modern world in order to push boundaries and turn parishes in a more liberal direction.

Priestly opinions on homosexual behavior, which the Catechism of the Catholic Church says is “intrinsically immoral and contrary to the natural law,” have also changed in recent decades.

The Church’s catechism says that “homosexual tendencies” are “objectively disordered” and there has been considerable controversy over whether men who identify as gay should be ordained to the priesthood. Pope Francis famously said “If someone is gay and he searches for the Lord and has good will, who am I to judge?” on an airplane in 2013 when asked about the topic. A 2005 church document released during the pontificate of Benedict XVI said that men with “deep-seated homosexual tendencies” should not become priests. (RELATED: Catholics Are Getting Smart About Responding to Gender Ideology)

Priests in the 2002 and 2021 surveys were asked how much they agreed with the statement that “The sole path to salvation is through faith in Jesus Christ.” While 48.3 percent of all priests surveyed in 2002 said they agreed strongly with this statement, that number increased to 58 percent in 2021. And notably, priests who were ordained between 1980 and 1999 were more likely to say in 2021 that they believe faith in Christ is the sole path to salvation than they were in 2002, possibly indicating that already ordained priests are becoming more conservative over time.