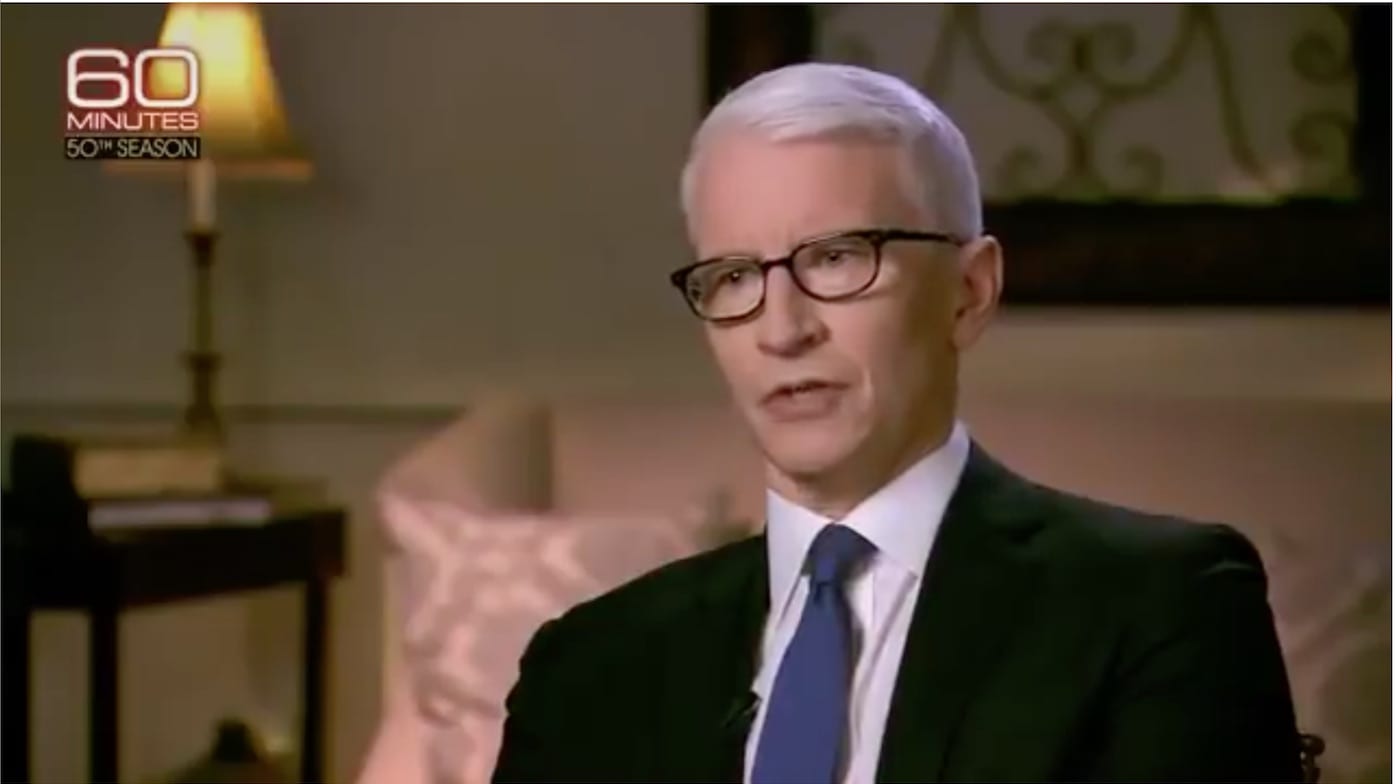 CBS’s 60 Minutes rounded out Palm Sunday yesterday with an exclusive interview with porn-star Stormy Daniels leveling salacious charges against President Trump. The interview was aired almost 20 years to the day of another surreal interview involving a president and sensational sexual allegations.

On March 24, 1998, the New York Times provided a platform for one Bernard Lewinsky, father of a lady likewise infamous for lewd antics. In an article titled, “He Accuses Special Prosecutor of ‘Trying to Torture’ His Daughter: Lewinsky’s Father Rips Into Starr,” Lewinsky exploded not at the man who employed his little girl — Monica — as a sexual play-thing in the nation’s most revered office, but instead unleashed his anger at, well, Ken Starr.

“I think this is just the drip torture technique that Ken Starr is using on her,” complained the Los Angeles cancer specialist, condemning not Bill Clinton’s grotesque techniques on his daughter. “He is just trying to torture her in every possible way.” Dr. Lewinsky said his daughter was being used as a political “pawn” by the slimy Starr. She was now “very depressed” and a “virtual prisoner in her apartment,” unable to talk or even see family and friends and her own brother.

In a bizarre display of misguided venting and parenting, Monica Lewinsky’s father directed his fire and fury not at the nation’s obscene chief executive in the Oval Office sexually manipulating his child, but at Ken Starr. Instead of threatening to slug Bill Clinton, he pounded Ken Starr.

It wasn’t his first slap at the good independent counsel. In a piece the Times ran a few weeks earlier, “Intern’s Father Assails Starr Over Inquiry,” Lewinsky had barked at Starr: “Lay off!” These were words that surely would have been better spent hurled at Bill Clinton. But that wasn’t the mindset of Monica’s father; his villain was the independent counsel. Dr. Lewinsky surmised that what Ken Starr (not Bill Clinton) had “brought upon” his daughter was “unconscionable.” Displaying his liberal bona fides, Dr. Lewinsky said the nefarious Starr so repulsed him that the counselor made him think of the worst of humans: Joe McCarthy. The attorney was running a “McCarthy-era” investigation. In fact, said Dr. Lewinsky, this new era was actually worse than that: it was reminiscent not merely of the McCarthy era but “of the Inquisition” and even “the Hitler era.”

That was 20 years ago right now. And it’s worth noting today because Dr. Lewinsky’s comments weren’t solely representative of an enraged father who had gone bananas thanks to Bill Clinton and was lashing out. No, Lewinsky was a proud liberal, and his misdirected indignation was reflective of liberals’ misdirected indignation during the Clinton-Lewinsky affair. The liberal press wasn’t simply in denial mode; it, too, was in attack mode — attacking not Boy Clinton, but Bad Boy Starr.

Such it had been for two nutty terms of Bill Clinton. Above all, the left told us this sordid stuff didn’t matter, and the liberal mainstream press did everything to avoid the elephants in the Clinton bedroom — actually, in the Clinton Oval Office.

Monica’s dad was sadly symptomatic of Bill’s supporters throughout the media.

It wasn’t until deep into the second Clinton term that names like Monica Lewinsky and Juanita Broaddrick — the latter a two-decade old case of alleged rape by Bill Clinton — made their way into the media. The press had to be dragged kicking and screaming, and only then after exposés by the likes of Matt Drudge. As for Broaddrick and her rape claims, that story finally hit the mainstream media when NBC’s Lisa Myers bravely broke ranks and interviewed Broaddrick. Then, the mainstream press slowly followed, including a detailed report on the front page of the February 20, 1999 edition of the Washington Post. It was, alas, the seventh year of Bill’s presidency.

Broaddrick herself would confront Hillary Rodham Clinton with a letter to the sitting first lady demanding an explanation, a letter excerpted in the press. That story didn’t enter the mainstream media until October 2000, the final full year of the Clinton presidency.

As readers here know, The American Spectator as early as late 1993 had been breaking extraordinary stories based on stunning interviews with (among others) the Arkansas state troopers unluckily assigned to Gov. Bill Clinton. The troopers’ accounts were jaw-droppers, and credible — and yet the press assiduously ignored them. When Paula Jones or Gennifer Flowers attempted a mere press conference, they were openly mocked by the press; literally laughed at on the spot. (To its credit, 60 Minutes did confront both Clintons on allegations of Bill’s marital infidelity during the 1992 campaign, an interview in which Bill and surely Hillary lied through their grinning lips.)

Recall, too, how all the president’s men joined the pack. Throughout 1998, the lieutenants in the Clinton camp were on a rampage against the special prosecutor’s office, which they openly portrayed as operated by fundamentalist-hayseeds, puritanical tyrants, sexual McCarthyites looking for a woman under every Clinton bed. Ken Starr was a modern Torquemada.

Especially adept at the art of vicious sliming was Clinton hatchet-man James Carville, who lampooned Starr for — heaven forbid — praying and singing hymns during walks along a creek near his home. “He goes down by the Potomac and listens to hymns, as the cleansing water of the Potomac goes by,” screeched a howling Carville, “and we’re going to wash all the Sodomites and fornicators out of town!” Sidney Blumenthal, White House aide and Clinton apologist extraordinaire, snarled that Starr fancied himself a “zealot on a mission derived from a higher authority,” and ripped Starr’s chief deputy in Little Rock, W. Hickman Ewing, who was obviously a “religious fanatic.”

Words like “bimbo” and “trailer-park trash” were tossed around brutally by Clintonistas to besmirch women who courageously stood up against the most powerful man in the world. Bill’s victims might have started the #MeToo movement, if only a single pro-choice feminist in Washington had been willing to stand at their side.

Now, every new sexual allegation against Donald Trump is an instant headline. No hesitation — straight to the front pages, baby.

And as for me, for the record, I’m as troubled by the allegations in 2018 as in 1998. I’m not shrugging this off. Conservatives must stand on principle and care about and condemn such outrageously and scandalously bad behavior, especially to retain any credibility. As readers here well know, I voiced character concerns about Donald Trump during his campaign in 2016 — as I had about Bill Clinton in 1992. But my focus here is liberals, and this reality: Their hypocrisy is coming back to bite them.

When liberals protest that Trump supporters aren’t taking these charges seriously, or cry foul when Trump defenders point instead to Bill Clinton in the 1990s, well, they shouldn’t be surprised. Liberals, there’s a moral-political consequence to how you covered your ears and eyes in the 1990s. And now you’ll see it among a sizable segment of voters that will reject your remonstrations of moral outrage against Donald Trump. Frustrated? So were we.

Paul Kengor
Follow Their Stories:
View More
Paul Kengor is professor of political science at Grove City College in Grove City, Pa., and senior academic fellow at the Center for Vision & Values. Dr. Kengor is author of over a dozen books, including A Pope and a President: John Paul II, Ronald Reagan, and the Extraordinary Untold Story of the 20th Century, The Politically Incorrect Guide to Communism, and Dupes: How America’s Adversaries Have Manipulated Progressives for a Century.
Most Popular
1
Political Hay
Time to Boycott Baseball and Coke — And More?
by Jeffrey Lord