Biden-era lockdowns, quarantines, and supply chain shortages blamed on COVID have transmogrified into runaway inflation, soaring prices, and a looming recession. Some blame the Chinese, some blame President Trump, and some blame Vladimir Putin. Personally, I blame Biden, and it’s all likely to get worse — much worse — before it gets better.

I’ve hearkened back to simpler times for solutions to Biden blunders, and a family cookbook-cum-pharmacopeia dating back to my great-grandparents and the hollers of southeast Kentucky. Great-Grandma Sarah Amanda Howard née Coldiron (supported by incredible energy, a useful cooking staff, or both) had a knack for transforming simple staples into white-tablecloth dining. She would cut off the big and little ends of boiled eggs, mash the yolks with condiments, restuff the eggs, roll them in breading, and deep-fry them for a special appetizer. She would separate eggs, whisk up the yokes, fold in the whipped whites, spoon on sweet or savory toppings, and finish them in a hot oven. Under her supervision, glazed onions, mashed cream carrots, grilled cow’s udder, smoked tongue, beef palate, and stuffed pigeons transcended their humble origins and delighted the eyes as well as the taste buds — all while nourishing body and soul.

She accessed the bounty of the farm and the bounty of the surrounding woods with equal dexterity to feed her family and treat their illnesses — curing headaches with willow water, bay leaf, or feverfew tea; staunching wounds and treating cuts with blackberry leaf poultices or tincture of horsebalm; and settling stomach upset with tea blended from pounded pumpkin seed, celery seed, chamomile, and mint. Many of her home remedies did double duty on the table and the sick room, and few herbs or simples proved more useful than stinging nettle (Urtica dioica). 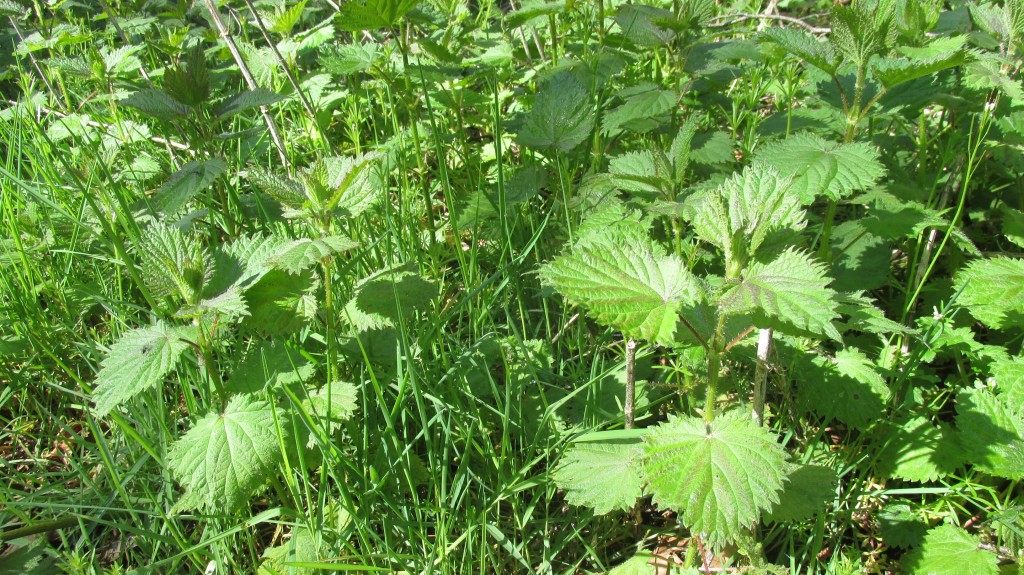 Stinging nettle tea could treat whooping cough, the common cold, hay fever, and bladder infections. Fresh leaves and stems could be applied to arthritic joints to reduce pain, inflammation, and swelling — it stung, but presumably released endorphins and provided at least temporary relief. Ditto with bursitis, sciatica, and by extension, tendinitis.

When harvested in the fall, the mature plants could be peeled, split, and twisted into twine or spun into cloth. But harvested when young and tender, stinging nettles did everything that spinach could do, and better.

Stinging nettles prefer light shade and moist soil, and when I was young, the drain fields paralleling railroad tracks were primary foraging fields. Back then you might come into contact with hobo jungles vaguely reminiscent of the “homeless camps” glutting Dem-run vote farms and urban centers today, but the hobos were pretty much drug-free and less violence-prone. The “homeless camps” of today harbor drug-crazed lunatics capable of unspeakable violence and tend to be located downtown.

Be that as it may, gloves and a paper bag or cloth tote were absolutely necessary when foraging for nettles. Great-grandma saw that the leaves were harvested in mid-spring from plants no more than 12 to 16 inches tall. She’d wash them thoroughly under cold water, lay them out on a towel or napkin to dry for an hour or so — and if the little hairs still tingled at the touch, she’d very gently parboil them (just a dip should do) into submission. The well-drained leaves can make for a savory stinging nettle quiche or a very convincing Eggs Florentine and can be served up in any dish calling for spinach. I’ve added them to pizza on top of the sauce in place of basil before layering on the salami, mushrooms, and cheese, to rave reviews. But for a toney, upscale treat, I don’t see how you can beat her stinging nettle potage. It’s right up there with her best “silk purse from sow’s ear,” “something [good] from [almost] nothing,” and “elbow grease as transformational secret ingredient” tour de forces. Basically you’ll be feeding a family of six on a quarter cup of rice.

Creamed and pureed soups were a lot more work in the last half of the 19th century, as they involved building roués, cooking the vegetables soft, pounding them with the meat (if called for), rubbing them through a sieve, and maybe adding cream or egg yolk just before serving. In this day and age of immersion blenders, this smooth and bright soup is simplicity itself.

Wearing gloves, heap the nettles into a large colander and rinse under cold running water, picking out any debris or discolored leaves. Let sit for an hour or so to allow the volatile oils from the little hair-like “stingers” to evaporate (or you could parboil the leaves for a minute or two and drain in the colander). Chop coarse, removing stalks and tough stems.

Put the butter or oil in the bottom of your soup pot and cook the onion until soft (do not brown). Add the rice, broth, salt, pepper, nutmeg, and chopped nettles and cook for 15 to 20 minutes, until the rice is tender.

Use an immersion blender to whir the soup smooth and adjust for seasonings.

Et voilà! Serve as is — or with a dollop of sour cream or a few croutons artfully arranged on top.

For an even richer soup, double up on the butter and finish with a few egg yolks beat into ½ cup of half and half or heavy cream.