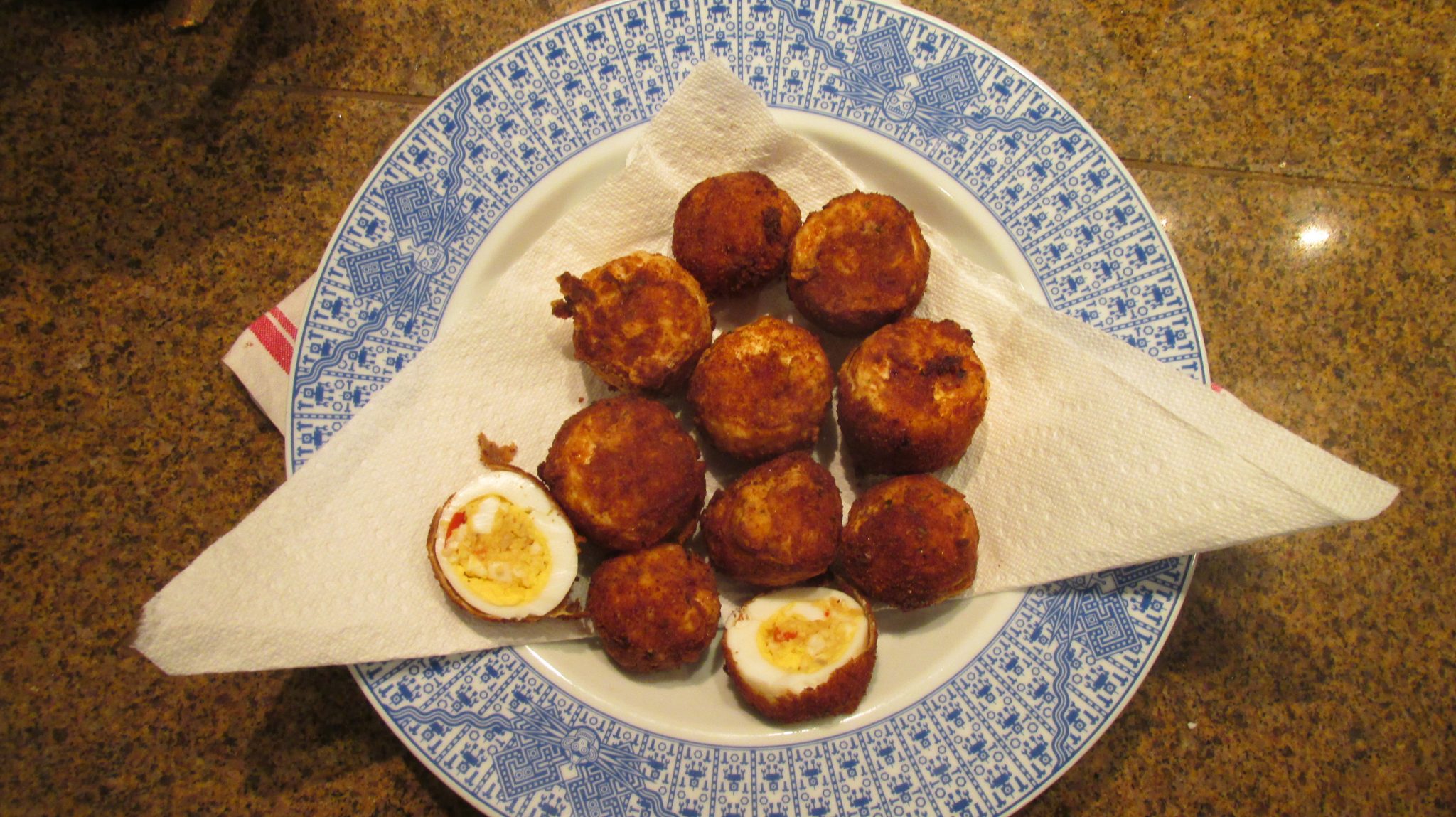 I have always been terrified of deep frying, afraid of burning the kitchen, and maybe the entire house, down. Once, I bought a tempura cooker. Through inexperience, I crowded the battered shrimp to the point where the temperature dropped and all the batter came off in a sodden mess. For the next 30 years I never gave deep-frying another thought — until COVID. With time on my hands, and my menu becoming monotonous, I dug out my Aunt Ruth’s copy of Great Grandma Coldiron’s recipe for deep-fried stuffed egg barrels and pawed around in a kitchen drawer until I found a candy thermometer. I halved the recipe (Grandma Coldiron raised a big family) and, with great trepidation, filled a pot half-full of oil, stuck in the candy thermometer, and heated the pot to temperature over a gas burner. I hit it out of the park with the first try.

Now, you might think that this looks like a lot of work, but trust me, it gets easier and easier with each batch. The whole point is, the ingredients are just one dozen eggs and a few vegetables, and the results are an elegant and toney (considering that Grandma Coldiron harkened from the hollers of Bell County, Kentucky), spectacular, unusual, and soul-satisfying extravaganza that you probably will never, ever see again outside of your own kitchen.

Hard-boil 10 large eggs, chill in ice water, and shell. With a very sharp knife, slice off one half of an inch or so from the big and little ends of the eggs (so they stand upright like little barrels) and carefully remove the yokes without damaging the barrels. Don’t worry if your initial slices don’t reveal the yolk — just carefully use the point of a sharp paring knife to cut down deep enough to remove it, again, without damaging the barrels.

Separate the yolk and white from one raw egg and set aside.

Sweat the bell pepper, mushrooms, and shallots in a sauce pan under low heat for five minutes.

Mash the cooked egg yolks and sliced egg white caps with one beaten raw egg yolk. Add bell pepper, mushroom, and shallot and season with a little salt, pepper, and paprika. Stuff the filling back into the egg barrels.***

Make an egg wash with the raw egg, remaining egg white, and two tablespoons of water. Season with a little salt, pepper, and paprika.

Deep fry in batches, for three minutes or until golden brown. I start at 375° F and try not to let the temperature drop below 350° F.

Serve in a circle over a bed of frisée lettuce/watercress, on toast with a drizzle of white sauce, slice into rounds and mask with white sauce, or just serve the way they are in a basket on a white napkin.

*There’s a trick to boiling eggs that peel properly. I boil the water, prick the large end of the egg with a thumbtack, put them in the boiling water, turn off the heat, cover the pan, and let it sit for 10 minutes. I place the cooked eggs in ice water until cool and peel under running cold water.

**I think it is important to season at every step: the filling, flour, and breadcrumbs.

***If you have a lot of filling left over (and you probably won’t), add half of the remaining egg wash and some of the seasoned breadcrumbs, roll into balls or croquettes, roll in remaining egg wash, flour, and bread crumbs, and deep fry like egg barrels.