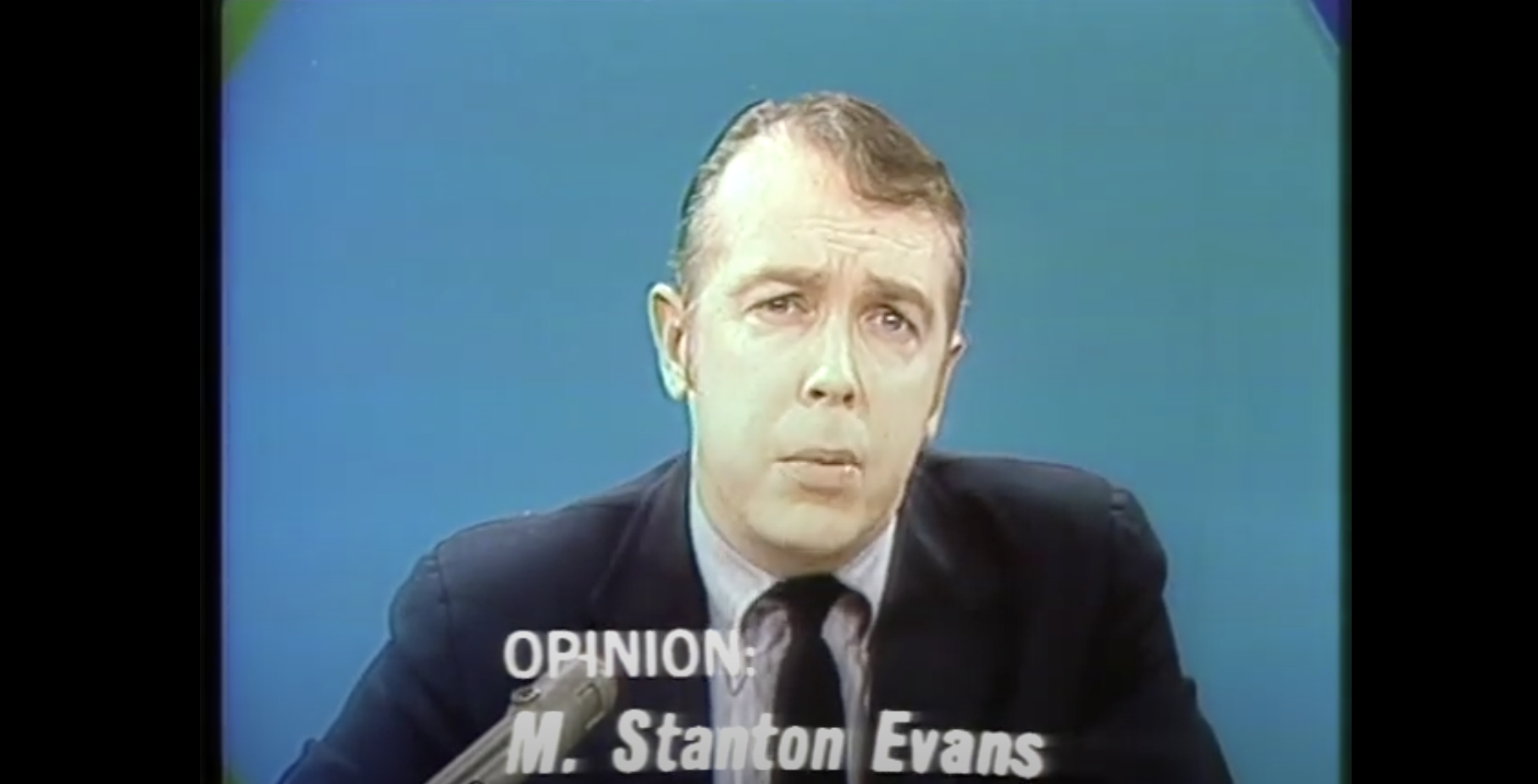 The late M. Stanton Evans, who eschewed computers for typewriters and offered the visage not of a TV pundit but rather of a funeral parlor director, just wasn’t made for these times.

In the age of the celebrity conservative of 140 characters or less, YouTube takedowns, and cable-news commentator sinecures, a pale, slightly disheveled guy fueled by cigarettes and coffee, who wrote 6,000-word Human Events pieces on Owen Lattimore while on breaks from instructing fledgling journalists in a dingy Northeast Washington building, surely would stand apart rather than fit in.

Not that the technophobe did not possess the tools required to thrive on Twitter. Evans’s memorable quips not only liberally salt the pages of the new biography M. Stanton Evans: Conservative Wit, Apostle of Freedom, but author Steven Hayward even devotes an appendix to them.

“That government is best which McGoverns least.”

“I wasn’t for Nixon until after Watergate.”

“I didn’t always care for Joe McCarthy’s ends, but I always admired his methods.”

Reacting to George Will’s penchant for seeing America’s pastime as representative of this and that, Evans dryly confessed, “I always thought baseball is a metaphor for softball.”

M. Stanton Evans belonged more to the people than to the professors.

“This is the greatest assembly of intellect since Richard Darman dined alone at the White House,” he once told Philadelphia Society attendees, “which was often.”

The attribute disqualifying him from celebrity conservatism, as one gleans from Hayward’s book, was his humility, which, like his sense of humor, left an impression. Sometimes the two traits combined.

The “chief attraction,” Hayward explains in discussing his subject’s affinity for his weekend hometown in rural Virginia, “was that it had a Hardee’s fast-food franchise at each end of town, so he had dining choices.” He continues, “This was the key to keeping a balanced diet, he liked to say: when he needed to change up his diet, he’d eat at the other Hardee’s.” The author notes that his subject was buried with a Coors hat rather than his Phi Beta Kappa key, casket fashion that aptly expressed its wearer. That he owned a three-legged dog and once sent back a White Castle burger for not being greasy enough screamed Stan. Hayward’s powerful vignettes of the Troy State professor’s popularity among small-town Alabamans and obliviousness to his import within the nation’s capital scream how Stan never screamed Stan.

His accomplishments spoke for themselves.

He graduated magna cum laude from Yale as a member of Phi Beta Kappa. He became the youngest editor of a major American daily in 1960 when he took over at the Indianapolis News. He wrote the best, most concise articulation of postwar conservatism in The Sharon Statement. He moderated the first panel at the first Philadelphia Society meeting. He trained thousands of reporters through his National Journalism Center and his classes at Troy. He served as the chairman of the American Conservative Union (ACU), through which he helped establish CPAC and institute the ACU congressional rating system. He wrote a longstanding column for the Los Angeles Times syndicate, edited Consumers’ Research magazine, contributed to National Review and Human Events, and authored 10 books.

The picture Hayward paints of Evans rescuing his set of Lord Macauley’s History of England from his burning Mustang convertible combines that unafraid-to-dirty-hands, everyman Stan with perhaps his most overlooked attribute: his towering intellect. Here he occupied elite and not proletarian real estate.

Hayward rightly regards Evans’s final books as “his greatest legacy as a writer and thinker.” Inspired by the fusionism of Frank Meyer, Evans in The Theme Is Freedom showed the indispensability of Christianity to Western liberty. In Blacklisted by History, he conveys the idea that the villainous Joe of the Cold War perhaps bore the last name Stalin, not McCarthy. He teamed with Herb Romerstein on Stalin’s Secret Agents: The Subversion of Roosevelt’s Government, which, with the aid of decrypted spy cables and released information from the files of the Soviet Union, shows the conspiracy much more immense than previously imagined.

These three books made it clear that had he pursued a formal academic career—as might have happened had he continued his graduate studies with Von Mises at NYU—he would surely have been a successful professor and likely a literary intellectual of the first rank mentioned in the same breath as Eric Voegelin, Russell Kirk, and Thomas Sowell.

But as signaled by his Coors cap and seeming preference for hamburgers over filet mignon, M. Stanton Evans belonged more to the people than to the professors. Of course that guy chose journalism over academia.

And that commitment to journalism necessarily included a fidelity to the No. 1 rule of reporters: never become the story. This helps explain the riddle of Stan Evans. Among those few thousand vocationally committed for life to the triumph of the American Right, M. Stanton Evans ranks near or at the top in terms of respect, admiration, and popularity. But his regular-joe modesty ensured that that intensity of feeling did not transcend movement circles to make him a name among regular joes. He never became William F. Buckley, Rush Limbaugh, or Tucker Carlson. Thankfully, he aspired to be himself. And he succeeded.