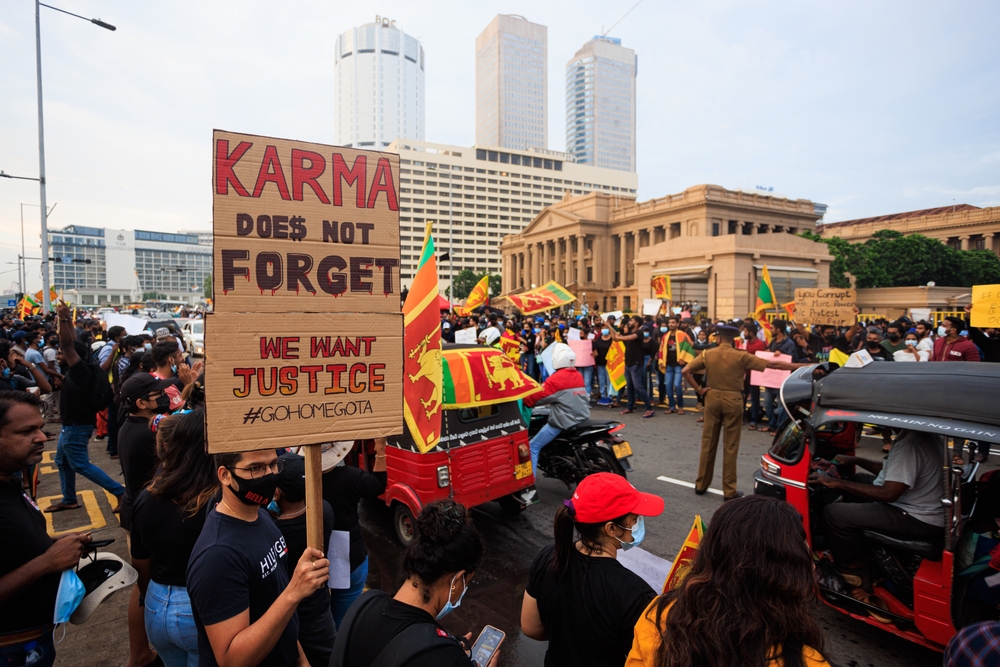 Gotabaya Rajapaksa’s final action as Sri Lanka president last week was to cling to power just long enough so that he could find a country that would accept him in exile. In the dead of night, a Sri Lankan military transport took him, his wife, and two bodyguards to the Maldives, whence he departed for Singapore — ending the Rajapaksa clan’s decades-long grip on power and offering some slim hope that a new government might steer a way through the sad morass that is the Sri Lankan economy.

No one will doubt Rajapaksa had a tricky course to navigate, a course that exposed his minuscule understanding of basic economics. Already one of the most highly indebted of emerging markets nations, Sri Lanka saw its tourist industry first devastated by a scorched-earth final military campaign against Tamil Tiger rebels that led to credible reports of widespread rape and abuse. Then, within a decade, the emergence of the COVID virus essentially finished off tourism on the island.

Yet the president also was not immune to the baubles that often catch the eyes of autocrats with unchecked power. Using loans from China, Rajapaksa went on a vanity spree, building a seaport, convention center, and performing arts center — all named after himself — and, as the final jewel of his narcissistic crown, Rajapaksa International Airport, the kind of boondoggle for which the word “boondoggle” was invented in the first place.

It was built so deep in the middle of nowhere that it might as well have been situated in the middle of the ocean. It drew so little traffic that budget airlines and eventually flagship carrier Sri Lankan Airlines declined to use it. One government report said the airport had monthly revenues of $125. In May, Sri Lanka defaulted on its foreign debt.

But the final nail in the coffin came when Rajapaksa impetuously decided in April 2021 to ban synthetic fertilizers and pesticides. The country, he declared, would become “organic.” Sri Lanka was going green.

Green is the new red

Going green is a pillar of the Environmental, Social, and Governance (ESG) movement, which aims to include ESG goals in evaluating the investment-worthiness of companies and countries beyond mere profit and loss. Yet ESG typically delivers plenty of loss on its own.

Within weeks of the president’s diktat, rice production was down 20 percent. Scarcity sent food prices through the roof. Farmers who either could not or would not make the green transition let roughly one-third of the country’s farmland lie fallow. By any standard, Rajapaksa’s decision was a disaster.

ESG standards are “driven by a left-wing vision that actively ignores the disastrous consequences it creates,” he says. “There’s a saying that if you are a business that goes woke, you will soon go broke.”

For decades it was a shibboleth that “when America sneezes, the rest of the world catches a cold.” America’s global impact was such that nations around the globe felt a ripple effect from whatever bumps in the road the U.S. economy encountered.

But as Sri Lanka is arguably the first country to topple itself due to an untoward and unrealistic attachment to its own kind of Green New Deal, it’s fair to wonder what will happen now that Sri Lanka has sneezed.

It is a cautionary tale, and one in which a number of indebted emerging market nations will have to deal with various ripple effects from the island’s collapse. Countries including Laos, Lebanon, Pakistan, and Zambia are believed not to have enough foreign-currency reserves to last more than two or three months.

Sri Lanka’s pending delicate dance with the International Monetary Fund to secure loans and bridge funding is as likely to plot out the pitfalls of trying to resolve similar crises as it is to provide a roadmap out of the troubles.

The country’s downfall also helps expose some of the dangers of counting on ESG policies to bolster an economy.

“ESG could be the internet bubble of this decade,” says Bruce Clark, chief macro strategist at Informa Global Markets. “The ESG movement effectively shames institutions into a kind of hollow virtue-signaling. Sri Lanka didn’t have the green technology to carry out Rajapaksa’s diktat. Indeed, much of the technology needed doesn’t even exist yet, at least not at scale.”

Clark says it is not a “huge leap to imagine Europe, many of whose economies are already faltering, to start getting badly exposed by its reliance on ESG-driven policies.”

And that means a ripple effect far larger than that which could have been predicted by a tiny island nation.

“ESG is essentially a cover for poor performance,” Clark says. “With the passage of time, I think it will be ultimately seen as a giant sham.”