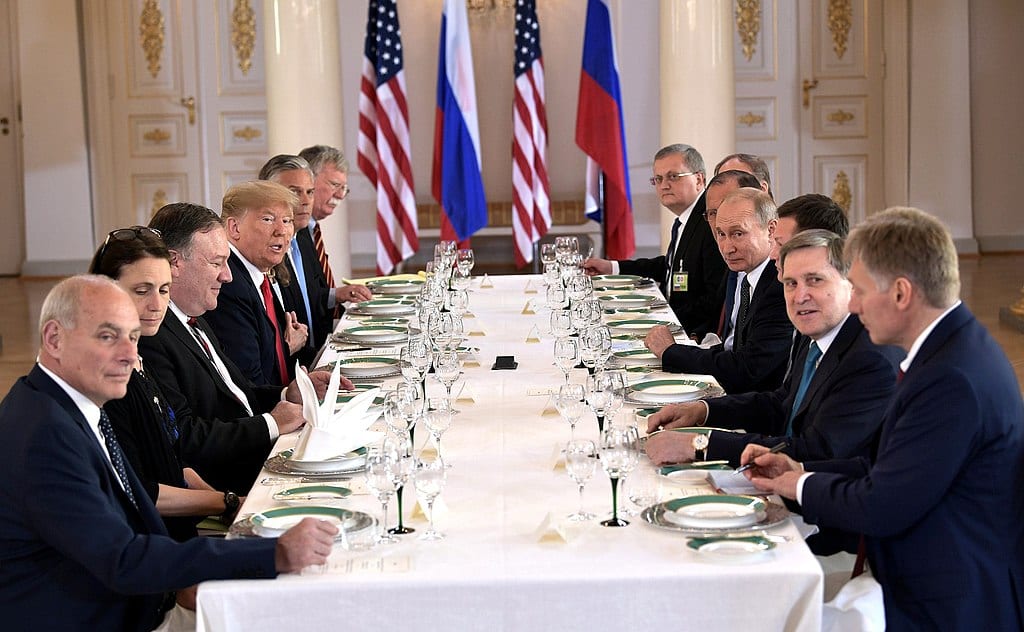 President Donald Trump and Russian President Vladimir Putin have now met in a much-ballyhooed summit in Helsinki. Together, the United States and Russian Federation represent two of the most militarily powerful countries in the world. Unlike so many presstitutes in the West, I believe that President Trump should get high marks for the meeting.

As per the usual, David Goldman summed up many of my personal thoughts on foreign policy issues when he wrote:

It was America that made a mess of relations with Russia, and President Trump’s tweet this morning was right on the mark. You can usually gauge the merits of this president’s public statements by the decibel level of the protests.

The one area of growing concern for me, as a national security space policy analyst, is in the area of space-based weapons development. You see, while I generally believe that Trump took the right track by appearing somewhat conciliatory and friendly with his Russian counterpart, we can never forget that Russia is not our friend. Yes, Trump said repeatedly that Russia was a “competitor.” He is correct.

But, it was Putin’s opening remarks at the post-summit press conference that worried me:

“[Russia believes] it necessary to work together on — to interact on the disarmament agenda, military and technical cooperation. This includes the extension of the Strategic Offensive Arms Limitation Treaty. It’s a dangerous situation with a global American anti-missile defense system […] And, of course, the agenda of non-placement of weapons in space.”

I cannot stress enough how dangerous it would be for the United States to give concessions to Russia over its potential space force or its already-ailing nuclear arsenal.

Right now, the United States is threatened by the specter of nuclear warfare at a level it hasn’t been since the heady days of the Cold War. Unlike the simpler (though decidedly scary) Cold War, there aren’t only two nuclear-armed states squaring off against each other. On the contrary, there are now multiple states — all spread throughout the world, at various levels of development, with wildly different political systems and cultures, all of which have differing intentions.

Notably, the threat of nuclear-armed rogue states ranks high (and has, for many years) on the list of potential grave threats to the United States. Various forms of statecraft can be used to mitigate these threats. Options range from traditional diplomacy to covert action; sanctions to cyber espionage; and everything in between. Each threat can be handled with different tools.

With North Korea, diplomacy seems to be the best way to operate — for now. Though, it is important to understand that within the next two years, regardless of what happens between Trump and Kim, North Korea will likely have a fully functional nuclear weapons arsenal. Yet, it is possible that Trump playing nice with Kim will keep his wilder urges at bay — maybe.

However, playing nice with the other, major nuclear-armed rogue state — Iran — will not deter the Mullahs from war. In fact, as the late Mideast historian, Bernard Lewis, cautioned: such niceties (weakness, in the eyes of the mullahs of Tehran) would likely induce Tehran into greater, nuclear-armed aggression against their neighbors and the United States.

At the same time, though, there is no way that the United States would willingly risk another major Middle East war against a somewhat capable (and rabid) enemy in Iran. If diplomacy is unlikely to ameliorate the threat and conventional warfare is likely to do more harm than good to the United States (and the wider region), a technical solution is needed.

This is where former President Ronald Reagan’s idea for a space-based missile defense system — popularly known as “Star Wars” — comes in. By placing defensive weapons in orbit that can track and immediately shoot down nuclear missiles in orbit, the United States (or an ally) is protected from annihilation. It also gives the United States time to respond to an attack, and a space-based system would likely keep any serious fallout from even reaching down to Earth. Even if these regimes could be wooed diplomatically, the political culture of these two states imbues a degree of internal instability that could eventuate in a nuclear threat to the United States.

There is another, longer-term strategic issue: the rise of China.

The People’s Republic of China has not only moved into a highly competitive role with the United States on Earth, but China is also seriously focused on developing space capabilities to challenge the United States. What’s more, China does not make a distinction between their military and civilian space programs. They are fused.

This explains why a Chinese military space station, the Tiangong-2, is presently floating above the planet conducting experiments that likely have military applications. Further, Chinese military doctrine explicitly outlines the need over the next decade to fully militarize the cosmos to further Chinese state interests — at the expense of the United States.

Therefore, it not only behooves the United States to develop defensive space-based weapons capabilities, but to also place offensive systems in orbit. Such a move would deter aggression and ensure that the cosmos remain open to the United States. At present, China’s military buildup in the strategic domains of land, sea, air, and cyberspace are truly threatening to the United States’ military dominance. Further, China’s economic strength and the increase in its technological capabilities — if fused to a robust space policy — would spell the end of America’s once-unquestioned full-spectrum dominance.

For its part, Russia is insistent on preventing the United States from realizing its dreams for space-based weapons. Understandably, the Russians view any American space-based weapons system as a direct threat to their country. What’s more, as F.H. Buckley recently argued, the Russians are dying for legitimacy in the eyes of the world — and they want Washington to view Moscow as an equal. The Russian nuclear arsenal ensures that they will always be given greater importance by Washington than, say, Italy (whose GDP is roughly equal to that of Russia’s).

Space-based weapons will undermine the potency of Russia’s nuclear deterrence. Given Russia’s horrific economic conditions — and the fact that it was the potential of an arms race in space with the United States in the 1980s that destroyed the Soviet Union — Putin knows that he cannot afford to compete with the United States for space-based weapons.

President Putin is right when he argues that the United States has wronged Russia since the end of the Cold War (though he is not innocent either). However, Trump is not like his post-Cold War predecessors. He genuinely wants better relations with Moscow. It is my firm belief that Trump has exhibited more good will — and afforded Putin more, genuine respect — than any of Trump’s predecessors.

Thus, going forward, Trump must work to preserve the necessity of American space-based weapons while not losing the capacity to make the mother of all geopolitical deals with Russia over the most pressing issues straining the relationship.

After all, just as Reagan tried to convince Mikhail Gorbachev, an American space-based weapons capability can be a mutually beneficial defense for both the United States and Russia against our shared enemies. More importantly, the presence of a reliable space-based weapons network would allow for the United States to seriously engage in nuclear arms reductions without sacrificing its own defense. But many in Washington (like those in Moscow) fear the “destabilizing” effects American space weapons would have on potential, peaceful relations.

This is an unfortunate pattern that played out in the Cold War from the crucial years of 1964-73. As Derek Leebaert recounts in his damning Cold War history, The Fifty-Year Wound: How America’s Cold War Victory Shapes Our World, the Johnson Administration consistently undercut investments into more accurate nuclear weapons and antiballistic missile defenses on the fear that it would “destabilize” the relationship with the Soviet Union, thereby encouraging the Soviets to engage in a massive arms buildup. As it turned out, it was the lack of adequate investments into America’s nuclear arsenal and its antiballistic missile defense systems that encouraged Moscow to take risks.

Should President Trump listen to his Russian counterpart and abandon his claimed commitment to establishing America’s first-ever space force, or should he reduce nuclear arms without similar — provable — concessions from the Russians, he might be inspiring the same kind of aggression that Johnson did. Even if Russia didn’t interpret such self-deterrence as a weakness to be exploited, China most certainly would… along with both Iran and North Korea.