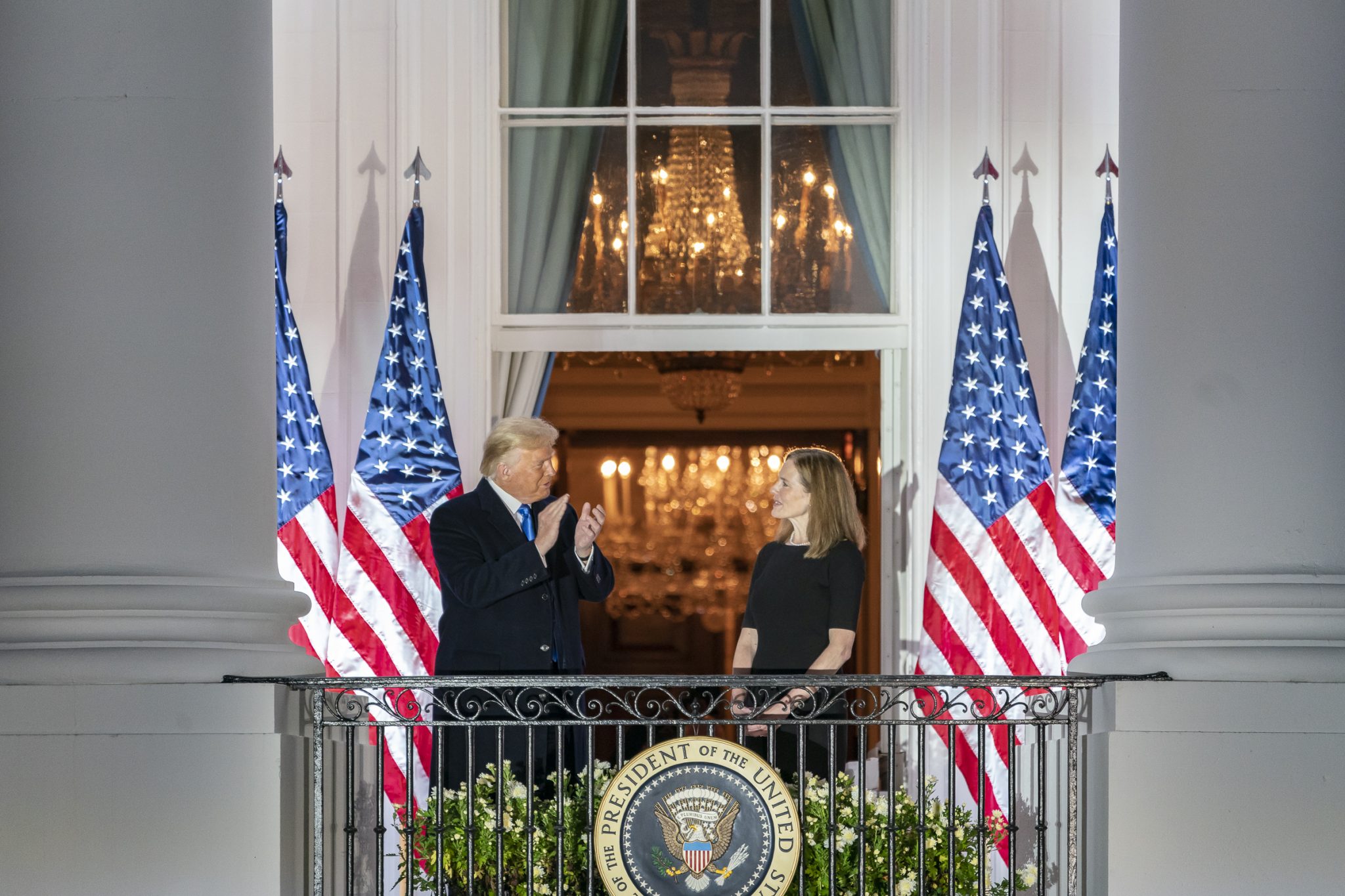 sounding: noun, the act of measuring the depths or the heights

Joe Biden and Kamala Harris refuse to say if they will pack the court, in the sense of the phrase used for 90 years since FDR’s time — creating new seats on the Supreme Court by legislation and then filling them with judges supposedly favorable to the current political regime, and not in the sense that Democrats are currently using the phrase, namely, the Trump administration’s diligence in filling current vacancies in all federal courts. Biden excused himself by saying that no matter which way he came down, that would be the news of the day, eclipsing everything else he had to say. Based on this criterion, I’m surprised that Biden and Harris say anything, one way or the other, on other hot-button issues such as fracking, open borders, taxes, China, and the virus. In the latest turn of events, Biden is going to punt a proposal he once called “bone-headed” to a commission — for their sage advice.

Hmm, so it’s okay to legalize pot, despite health issues associated with its use, but it’s a real danger to even discuss the use of hydroxychloroquine, whose safety record over 80 years is known. And it’s okay for the Democrats and the mainstream media to undermine the public confidence in any vaccine produced during Trump’s tenure, by several major pharmaceutical companies, until Biden is elected and gives it his personal imprimatur.

Biden and Harris say Trump dithered and did not disclose in a timely manner what he knew of the dangers of COVID. With a drum, they beat out “200,000 deaths.” They imply that President Trump is responsible for every single one of those 200,000 deaths, and they excuse China, Gov. Andrew Cuomo of New York, Gov. Phil Murphy of New Jersey, etc. They give President Trump no credit for the many things he did — including banning flights from China and Europe, lawfully commandeering private companies to produce ventilators, and initiating Operation Warp Speed to develop vaccines and disseminate them on a grand scale. President Trump can quantify how many lives his administration saved, since early estimates were 2.2 million American deaths. An easy calculation: two million.

Britain has offered three million residents of Hong Kong the opportunity to migrate to Britain. The United States should compete for these people: They love freedom, they know English, and they are well educated. Like refugees from Vietnam and Cuba, they will vote for America. They will echo Maximo Alvarez, the Cuban refugee who spoke at the Republican National Convention: “If you lose this place, you’ll have no place to go.”

Why is Brazile a commentator on Fox when she disgraced herself, and committed fraud against the American people, in passing a debate question to Hillary Clinton in 2016? She left CNN over the scandal. Maybe she apologized.

I am not a fan of voting on any day other than Election Day, except for “absentee voting,” in which voters vote in person before Election Day, or request a ballot before Election Day, because they do not expect to be able to vote on Election Day. But I would agree to early voting — even as early as the first day after the names of party candidates have been certified to state boards of elections — on one condition: Voters must have a way to change their vote by the end of Election Day. At least eight states allow a change. Newt Gingrich promotes the idea of government incorporating the best practices of the private sector. I think the private-sector model here would be the ability of traders to trade millions of dollars more than once on the same day. Voters should be able to vote once before Election Day and change their vote once on Election Day.

Harris is of course a California senator and voter. Perhaps little known outside California is that she publicly supports “Prop. 16,” the proposed amendment to the California state constitution to repeal Prop. 209, adopted in 1996, which banned state agencies from considering race, sex, color, ethnicity, or national origin in hiring, admissions, and contracting.

At the president’s rally in Minneapolis on October 10, he spoke about meeting the coffins of our deceased military personnel in Dover, Delaware. When he was finished, he rubbed his finger, ever so briefly, a couple inches down from his right eye. He was wiping a tear or two.

When President Trump spoke to the nation in January 2020 about the death of Iranian General Qasem Soleimani, MSNBC reporter Katy Tur described the people accompanying the president as “stern, white men.”

Maybe she wanted the military brass to smile or laugh or do high-fives. The only thing Democrats and mainstream media can see is skin color and sex. And they think of them monolithically. Contrary to Biden’s statement in May 2020, Blacks can vote for Republicans and still be Black. And whites are not monolithic either. Caucasian history shows deep divides, and great progress in healing the breaches, among Irish, English, German, French, Cubans, Mexicans, Poles, Hungarians, etc.

As late as October 10, Washington Post reporters (and the editors who approved the article) described the “mostly peaceful protests” this summer as involving “occasional looting.” To counter this pleasant scenario, here is an early June list of officers killed and injured. And in July, Gov. Tim Walz of Minnesota asked President Trump for federal aid because 1,500 businesses had suffered damages in excess of $500 million. In September, a company named Property Claims Services issued a report cataloguing this summer’s riots as the most expensive in U.S. history: over $2 billion.

There has been discussion about, and voting on, removal of personal immunity of police officers. Sen. Ted Cruz, on the other hand, introduced legislation in July to hold local officials personally liable for allowing mayhem.

Over and over again, the Democrats and mainstream media decry violations by Republicans of “our values.” I hasten to inform them that “our values” are not simply kindness and compassion, generosity, hospitality, tolerance, and gratitude. Our values are American values, derived from the Constitution, which make American values exceptional, such as our federal structure of government; separation of powers among the co-equal legislative, executive, and judicial branches; and a limited federal government having only enumerated powers. Nancy Pelosi’s dismissal of the question in October 2009 of whether Obamacare was constitutional as not “being serious” betokens her breach of oath to uphold the Constitution. She cannot uphold the Constitution if she does not consider the constitutionality of bills passed by the House. Clearly, her values do not include American values.

Since the election of 2016, the Democrats and mainstream media have pounded their fists and insisted that Trump is illegitimate because he failed to win the popular vote against Hillary. They forget the incident in February 2010 when President Obama turned to Sen. John McCain, whom he had defeated in November 2008, during a televised White House Health Care Summit (discussing what would become Obamacare) and acidly cut the war hero off, declaring, “I won.”

Conway was a bad spouse to publicly attack his wife’s boss, not once but multiple times, in op-ed pieces in the Washington Post. It is reprehensible that the Post published them and that no liberal or Democrat made him a pariah.

Kneeling for the American Anthem

Three points: What would we Americans think of Frenchmen and women who knelt during their anthem? Even the Communist Chinese and Russians don’t kneel during our anthem. Also, if we wanted to watch politicians play sports, we could attend the intramural congressional games.

Local and state officials take oaths to uphold the U.S. Constitution, including its Supremacy Clause in Article VI: “This Constitution, and the laws of the United States which shall be made in pursuance thereof; and all treaties made, or which shall be made, under the authority of the United States, shall be the supreme law of the land; and the judges in every state shall be bound thereby, anything in the Constitution or laws of any State to the contrary notwithstanding.” (It is rarely done, but federal authorities can bring federal actions in state court, whose judges are bound to uphold federal law.) Local and state officials are bound to cooperate with federal authorities in enforcing immigration law (which is federal law) and in protecting federal property such as the courthouse in Portland, Oregon. The Civil War started in April 1861, when state officials failed to protect federal soldiers and property at Fort Sumter; indeed, they attacked them.

And no one should be allowed to forget that scene of Deputy Attorney General Nicholas deB. Katzenbach (1922–2012), with U.S. Marshals, confronting Gov. George Wallace on June 11, 1963, at the University of Alabama. Wallace was resisting the admission of a black woman, Vivian Malone Jones (1942–2005), future sister-in-law of Eric Holder. 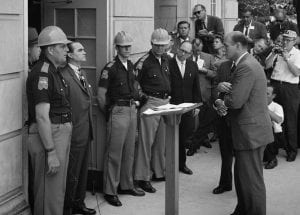 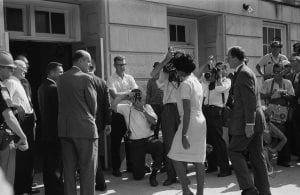 Do current local and state Democrats regard these federal actions in 1963 to be intrusive? Divisive? On July 17, House Speaker Pelosi called federal law enforcement personnel “stormtroopers.” On July 29, Oregon Gov. Kate Brown called them an “occupying force.” In late August, after the Kenosha, Wisconsin, riots, Gov. Tony Evers urged President Trump not to come to Kenosha.

On May 8, 2018, the United States announced its intent to withdraw from the Iranian nuclear deal. We have forgotten that former Secretary of State John Kerry met with Iranian officials in September 2018, advising the Iranians to wait out President Trump. Undoubtedly, China also wants to “wait out Trump.”