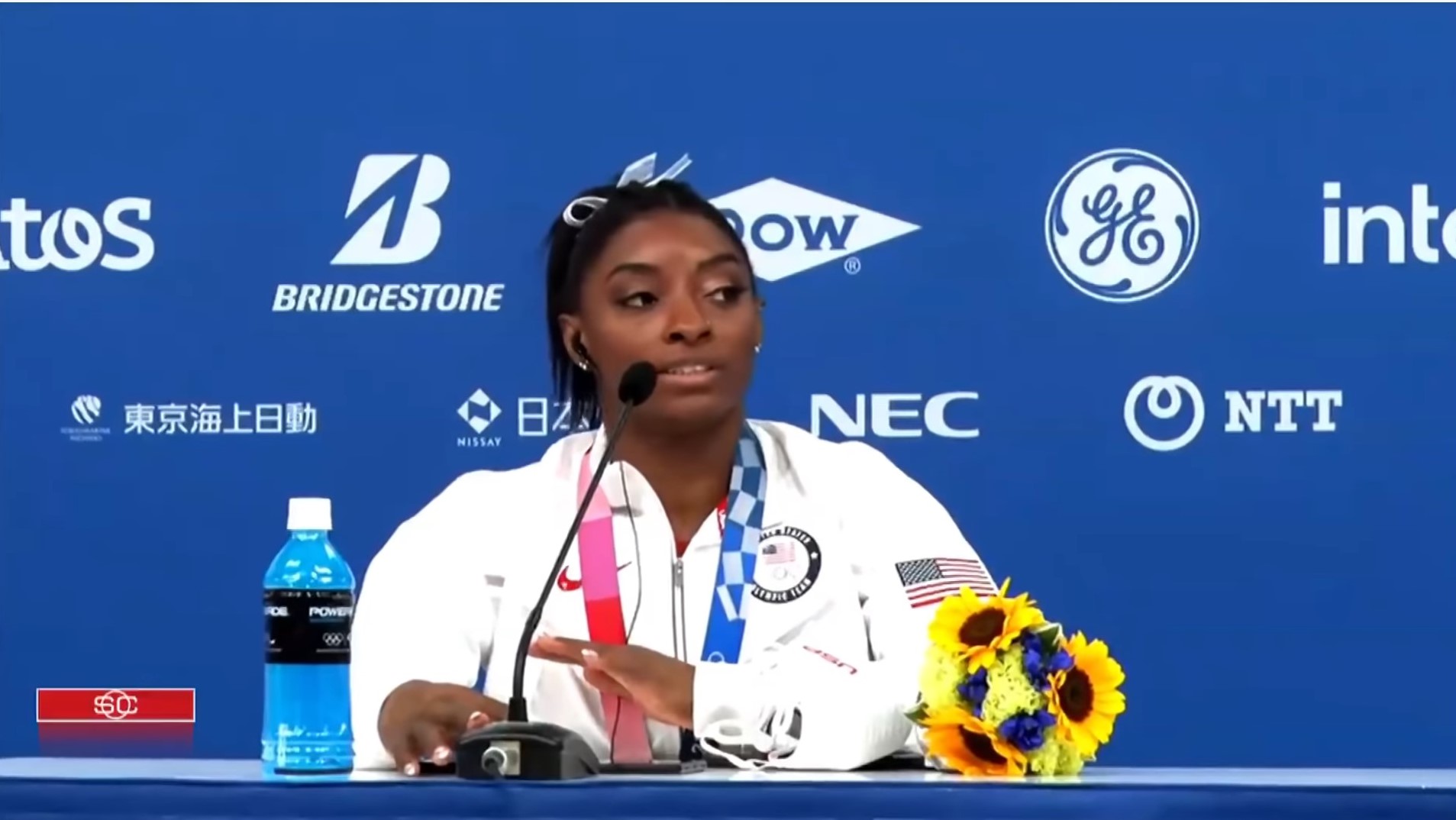 Her stunning withdrawal was originally thought to be due to a physical injury after her uncharacteristically lackluster vault performance. She failed to complete her full air rotations and as a consequence awkwardly stumbled on her landing. Biles huddled with a trainer and was promptly escorted off the floor by a team doctor, Marcia Faustin. Cameras caught her telling Faustin, “I don’t want to do it. I’m done.”

USA Gymnastics released an official statement saying that Biles has “withdrawn from the team final competition due to a medical issue. She will be assessed daily to determine medical clearance for future competitions.” But Biles said she stopped competing as a result of mental health issues. Upon her return, she gathered around her teammates, breaking the news of her withdrawal.

She said, “I’m sorry. I love you guys . . . You guys have trained your whole entire life for this. I’ve been to an Olympics, I’ll be fine. This is your first. . . . you go out there and kick ass.” Her teammates cried, unsure of how to regroup in an attempt to still achieve the gold after their star quit, especially since this was each of the three teammates’ first Olympics.

Biles proceeded to serve as a sideline cheerleader as her teammates competed against the Russian Olympic Committee and Great Britain to win a place on the podium. Rather than adopting their teammate’s posture of defeat, the three young women stepped up to the plate. Jordan Chiles performed well on the balance beam, Suni Lee thrived during the floor exercise without any penalties, and Grace McCullum avoided any major deductions on the uneven bars. Sadly, the U.S. team settled for a silver medal, with the Russian Olympic Committee winning the gold and Great Britain taking the bronze.

Known for her fierce athleticism on the floor, and bubbly personality off, Biles is often hailed as the greatest gymnast of all time with a combined total of 30 Olympic and World Championship medals. Her decision to quit the team finals did not change that for the public. Instead of lauding the athletes that performed well in the face of stressful opposition, the media fawned over Biles’ decision to quit — dubbing it “brave.” Her exit garnered adoration from all public avenues, with mainstream media, athletes, and celebrities singing her praises.

After donning their Olympic medals, the U.S. Women’s Gymnastics Team was interviewed by Today’s Hoda Kotb. Biles responded to Hoda’s concerned questions, saying, “I’m OK; just super frustrated but super proud of these girls, and now we’re silver medalists . . . Physically, I feel good. Emotionally, it varies on the time and moment. Coming to the Olympics and being head star isn’t an easy feat.” She added, “We hope America still loves us.”

Biles revealed another reason for leaving: “I feel like I’m also not having as much fun, and I know that. This Olympic Games I wanted to do it for myself.” She further defended her exit during a press conference, saying, “Put mental health first. It’s okay sometimes to sit out the big competitions to focus on yourself because it shows how strong of a person and competitor you really are, rather than just battle through it.”

Although the Olympic gymnastics team finals are over, the individual competitions are yet to take place, and some are speculating if or when Biles will return.

Biles said, “We’re going to take it day by day, and we’re just going to see.”