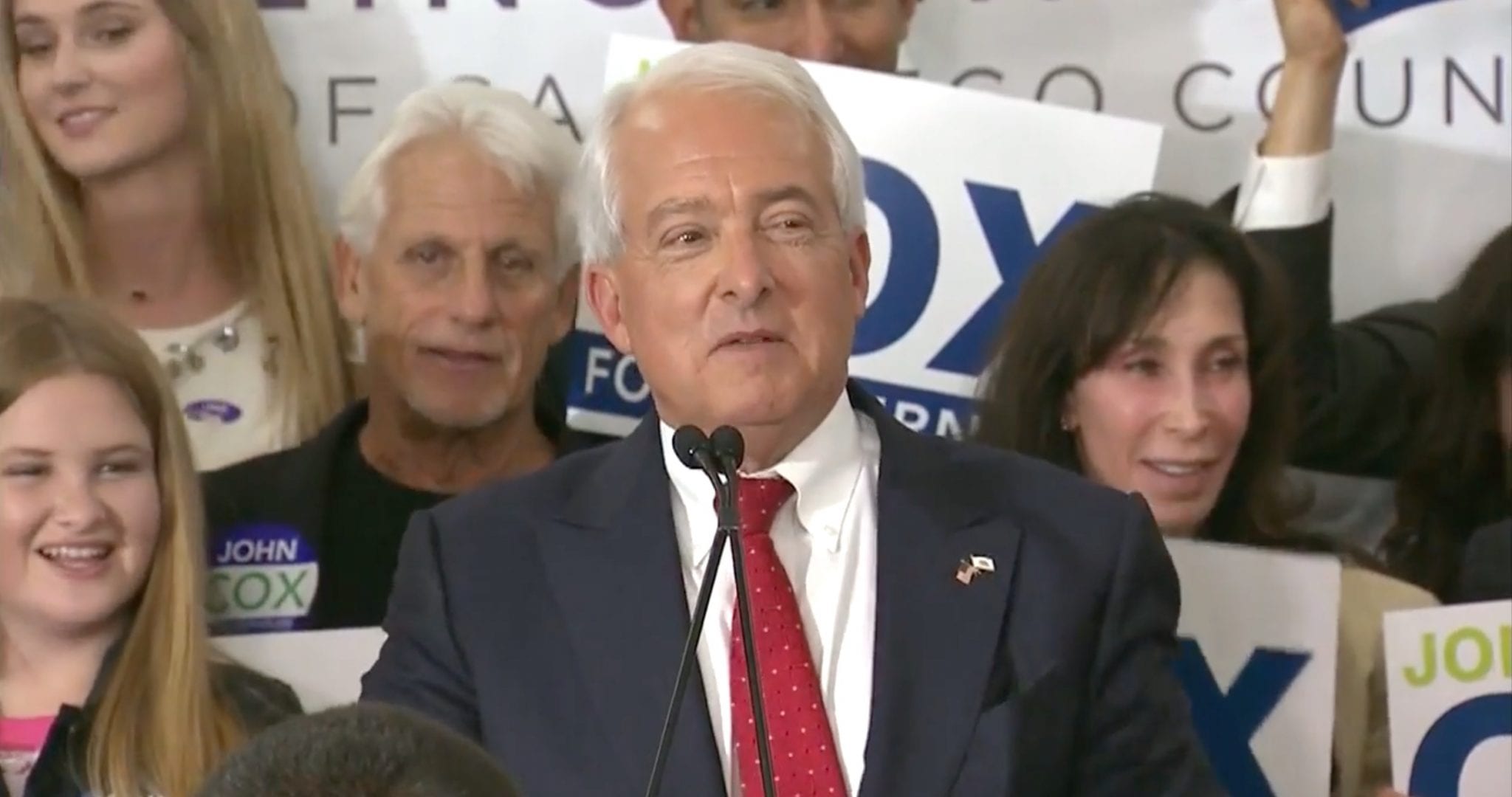 Perhaps I spent too much time on social media as Tuesday’s California primary results rolled in, but I was stunned by the negative reaction of the state’s most conservative voters. Some backers of gubernatorial candidate Travis Allen — a rabble-rousing Orange County Assemblyman who built his campaign around his support for the president — seemed reluctant to rally around John Cox, a San Diego-area businessman who had secured a boisterous endorsement from Donald Trump.

If Republicans are serious about rebuilding their brand in California, they need to recognize reality and make some important distinctions. Cox’s strong second-place showing in the state’s top-two primary system, whereby the top two vote-getters advance to general election regardless of party, is good news for the GOP and conservatives for various reasons. The president — no doubt urged to endorse Cox by Republican members of Congress — understood the importance of having an adult with some cross-party appeal as Republican standard-bearer as we head toward November.

Those who called Cox a RINO — a Republican In Name Only — are far off the mark. He’s a longtime conservative activist, out of the free-market, pro-growth Jack Kemp mold, which is a solid approach in California. As we head toward the general election, someone needs to make an intelligent case about how Democratic progressives have been destroying everything they touch (housing, the economy, health care, infrastructure) because of their adoration of government regulation, public-sector unions, and high taxation. Cox is capable of doing that.

Cox grabbed 26 percent of the vote, to Lt. Gov. Gavin Newsom’s 33 percent. The GOP’s chances are a longshot, but the party will at least have a serious contest and some chance to discuss economic issues. Cox nearly doubled the vote count of former Los Angeles Mayor Antonio Villaraigosa, a progressive Democrat who has for years been talking about undermining property-tax-limiting Proposition 13. If one wants to talk about RINOs, note that Meg Whitman, who spent $140 million of her own money to get demolished by Jerry Brown in the 2010 race, threw her support this year to Villaraigosa.

Other actual RINOs, such as former Gov. Arnold Schwarzenegger, have created a New Way California effort that isn’t particularly new — and is headed right into a dead end. For instance, one of the state’s best known moderate Republicans, Assemblyman Rocky Chavez of Oceanside, came in sixth, with a piddling 7.8 percent of the vote, in a San Diego-area congressional race. In many ways, a decent old Republican way that fits somewhere between Trump populism and Schwarzenegger-style moderation made a resurgence in California on Tuesday. That’s a good thing.

As commentator Joe Mathews noted, “the election’s preliminary results — it will take a while until everything is counted and final — mostly showed all the things that haven’t changed. And chief among these lessons of stasis was this: Republicans remain very much California’s second party.” His chief takeaway is that Republicans “remain in the game,” which makes it so important that the party figures out a way to revive itself.

That’s particularly true, as California Democrats continue to move rapidly in a Bernie Sanders direction. Yet at its convention this year, the GOP missed an opportunity to make meaningful endorsements. Sadly, a lot of the GOP grassroots believes that an approach that might work in Alabama or Iowa is likely to work in this deep blue state, with its large immigrant population and socially liberal urban centers. Perhaps Allen’s low vote count will disabuse them of that idea.

Republicans still are unlikely to score any statewide victories in November, but a respectable Republican showing might keep the U.S. House of Representatives in Republican control. Because of the top-two system, many Democrats had feared that their party would be shut out of the two run-off spots for November. Republicans, such as Dana Rohrabacher of Huntington Beach, led the pack in those races, but the Democrats seem to have grabbed the second spot in most of those races, thus keeping their hopes alive for another five months.

Although it hasn’t made national attention, the California GOP succeeded at ousting a sitting state senator by focusing on a simple message. The party launched a recall of freshman Fullerton Democrat Josh Newman because of his deciding vote in favor of a hike in gas taxes and license fees. Newman was bounced by a nearly 60 percent to 40 percent margin and replaced by a Republican in an Orange County district that has been trending Democratic. That denies Democrats a Senate supermajority. However, Democrats grabbed both slots in a Southern California Assembly district, which means that party will hold a supermajority in the lower chamber.

In November, Republicans are backing a full-on statewide repeal of the dreaded gas tax, which is a successful use of traditional anti-Sacramento messaging. It surely will gin up GOP turnout. On Tuesday, voters approved, by an 80 percent to 20 percent margin, Proposition 69 which promises to create a lockbox for transportation funding. It’s a largely meaningless measure that also undermines the Gann Limit’s cap on spending. But it sounded like a limited-government measure and shows, as Fox and Hounds’ Joel Fox noted, that California “voters don’t trust the legislators.”

In the U.S. Senate race, Dianne Feinstein, an old-school liberal Democrat, received nearly 44 percent of the vote. She’ll face off against Senate President Pro Tempore Kevin De Leon, but his 11-percent vote count doesn’t bode well for this ballyhooed challenge from the Left. Former Republican (now an independent) Steve Poizner got the top spot for insurance commissioner over one of the Senate’s most liberal members, Ricardo Lara, which might suggest that the state’s voters aren’t as eager as Democratic Party leaders to sprint to the Left.

Charter-school advocate Marshall Tuck took the top spot in the important and nonpartisan race for superintendent of public instruction, but he’ll compete against the California Teachers’ Association ally Tony Thurmond in November. Unfortunately, the charter-school community’s aggressive hit ads on Newsom (they supported Villaraigosa) might go down in the annals of bone-headed political moves, given the fear now that Newsom will have little reason to cut charters any slack if he becomes governor.

Republican turnout was good, but Democratic turnout was better, So, despite some of the good news for the GOP, the party has its work cut out for it in November. I wouldn’t put much stock in the state party’s ability to get its act together, but having Cox — rather than Villaraigosa or Allen — in the gubernatorial race certainly improves its prospects.

Steven Greenhut is a Sacramento-based writer. Write to him at stevengreenhut@gmail.com.