Well, that was quick. Tariffs make everyone nervous not least of which because they don’t work, just ask Ben Stein’s econ teacher character from Ferris Bueller’s Day Off. Steel and manufacturing prices have been rising, stock market anxiety has been rising, and threats of a recession loom should America continue on a protectionist path.

Maybe, though, President Trump has found a way to make tariffs work: pushing around the Europeans, who, by the way, did not agree to stop the tariffs against American imports. The only solid agreement that came out of today’s negotiations is that American wouldn’t impose further tariffs – for now.

I came for a deal, we made a deal. The EU continues to stand up for free and fair trade. My joint statement with @realDonaldTrump: https://t.co/JISJJ1CWR2 pic.twitter.com/GMpS0ZL5Ul 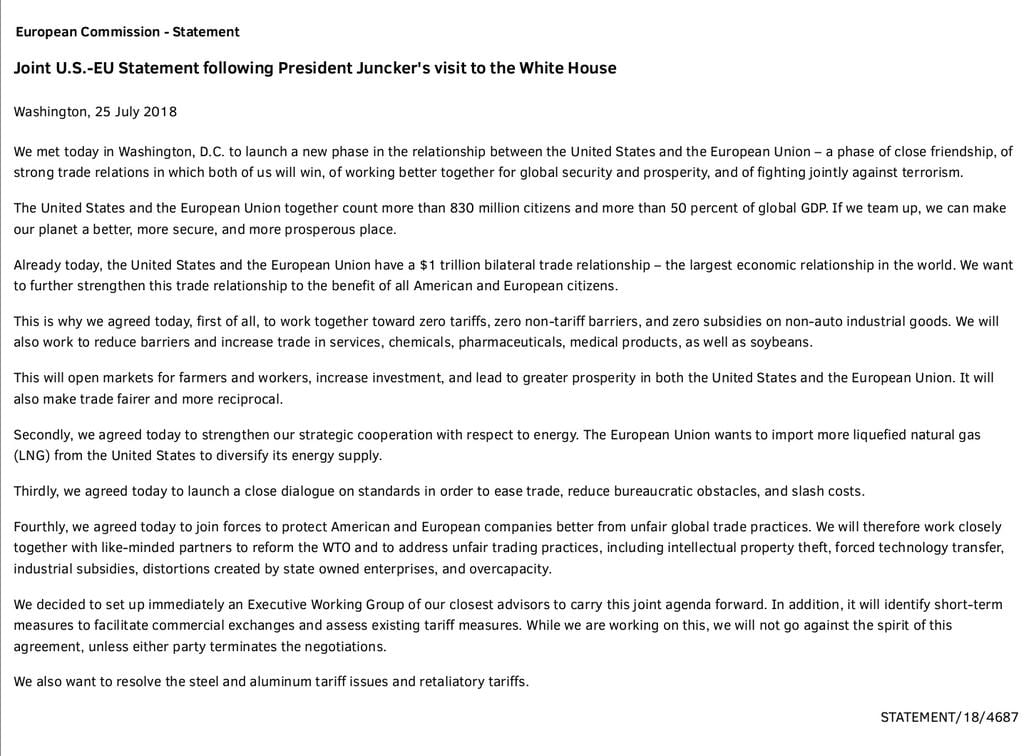 All this sounds like more talks are coming and that more decisions will soon be made.  Fear is a good short-term motivator. President Trump will hopefully keep pressure on Europe to do the right thing.

Trump has achieved more in one day of trade negotiations with the EU than May has in 2 years. If only we had a leader, not an appeaser.

No one likes the boat rocked. Nature seeks equilibrium even when it’s toxic. Many agreements that worked at one time, needed to be addressed, adjusted, and reconsidered. Chief among the understandings: America’s trading relationships with many partners.

For a long time, America absorbed the economic distortions that favored European, Asian, and pan-American partners because the American economy was healthier, more resilient and the other economies were growing and recovering from Marxism and after-affects of WWII and the Cold War. The world is healing economically and it’s right to consider whether America should continue to lighten their load at the expense of the load the American taxpayer and worker is being asked to carry.

President Trump’s businesses are commodity sensitive. He recognizes what’s been asked of Americans in a very personal and concrete way. The governments around the world understand, too, by the way. They know they have a good deal and one tilted to their own economies. Why not take while the taking is good?

In this time of adjustment, free-marketers are rightly nervous that tariff threats will devolve into full throttle trade wars that ultimately harm Americans. President Trump has asked for patience while he has uncomfortable discussions and reorients trade in a way that opens markets and is fairer for Americans. He seems to be delivering today.

By the way, the Stock Market is rallying. Bigly.

Melissa Mackenzie
Follow Their Stories:
View More
Melissa Mackenzie is Publisher of The American Spectator. Melissa commentates for the BBC and has appeared on Fox. Her work has been featured at The Guardian, PJ Media, and was a front page contributor to RedState. Melissa commutes from Houston, Texas to Alexandria, VA. She lives in Houston with her two sons, one daughter, and two diva rescue cats. You can follow Ms. Mackenzie on Twitter: @MelissaTweets.
Most Popular
1
Flynn Files
Unprecedented FBI Raid; Trump Calls It ‘Weaponization of the Justice System’
by Daniel J. Flynn