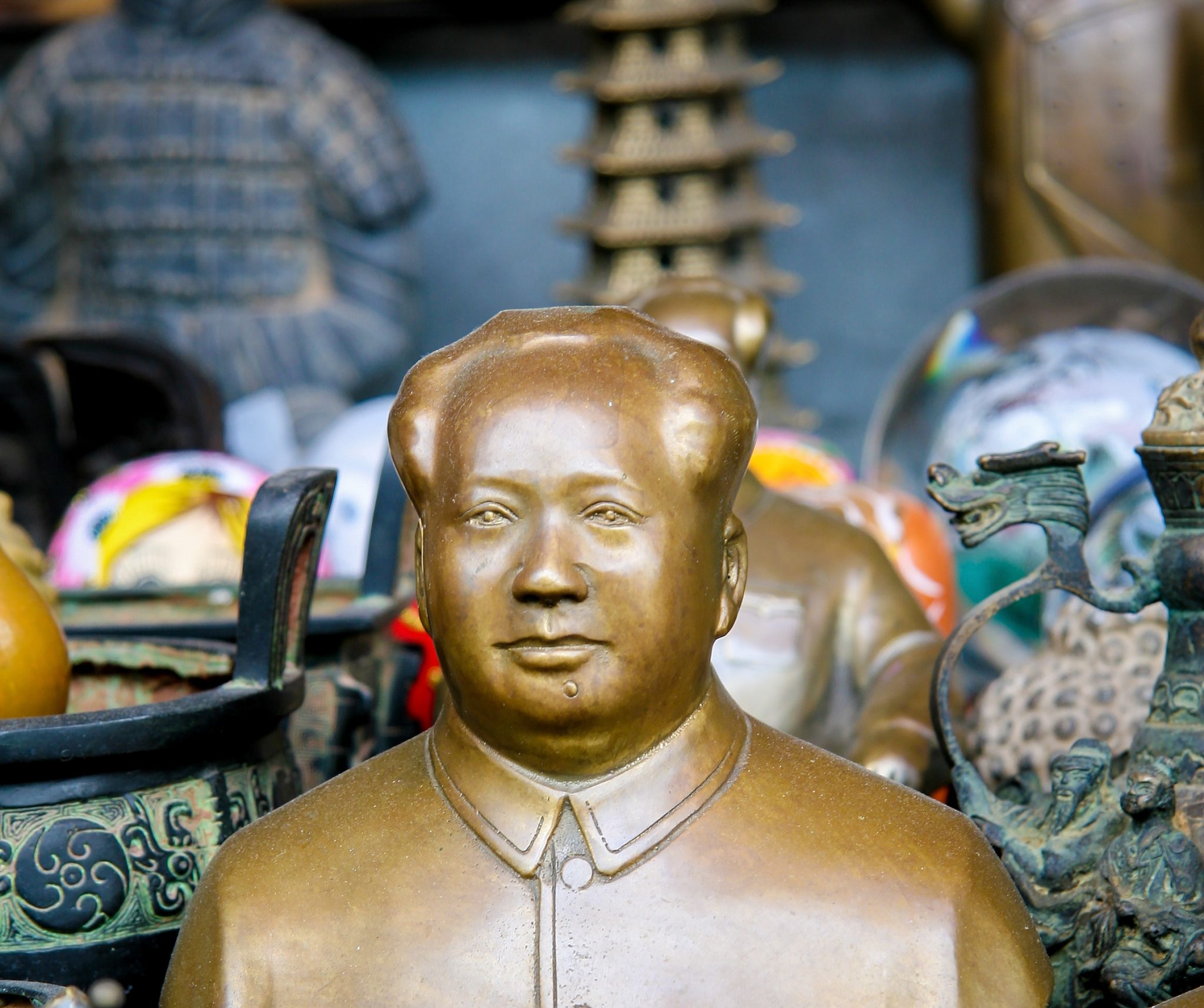 Before the November vote, Sen. Kelly Loeffler was running against Republicans as well as Democrats. Republican Rep. Doug Collins, who was eliminated by the November 3 vote, accused her of displaying a pricey Andy Warhol portrait of Mao Zedong in her home: “Seems a little hypocritical, or maybe it’s just enlightening.”

She denied ownership and accused him of photoshopping a picture he claimed came from Instagram. Since she outpolled Collins, knocking him out of the runoff, the issue must not have bothered many Georgians. But with polls showing her behind in the runoff, maybe she should embrace Mao. She could run some ads to that effect in Athens, home of the University of Georgia. It might help her win the student vote!

The issue does raise the question: are you what you collect? Despite Collins’ dark insinuations, there isn’t much evidence that Loeffler is a Maoist, whether or not the Warhol hangs in her foyer as claimed. In this case, at least, what she collects tells us nothing about her politics.

Perhaps collecting is a modern and urban replacement for hunting. In the past, accumulating a good collection meant haunting antique and junk shops, as well as attending out-of-the-way auctions. The internet has vastly expanded potential sources of supply. Collectors are still involved in the hunt, but it has grown to be much more complex and detailed.

I’m convinced it is a genetic quirk. You either have it or you don’t. If you have it, you are liable to collect almost anything. What you buy depends on a unique inner desire or interest. Which in some cases can be quite strange. A makeup artist at one of the cable stations where I was a talking head collected the macabre — coffins, skulls, and other such objects. Not what I’m into, but I certainly understood the underlying desire.

My interests have turned out to be constantly expanding. One of them is commie tchotchke. A Russian I’ve dealt with for years peddles the stuff on eBay. So my office areas are filled with Soviet desk ornaments, toy weapons, political commemorations, medallions, miniature military monuments, and more. Best are my busts. I’ve got Vladimir Ilych Lenin, of course, as well as Joseph Stalin. Neither killed quite as many people as Mao, but Stalin probably ranks No. 2 in raw numbers, with Adolf Hitler trailing in third place (though his attempt to eliminate an entire people puts him into his own uniquely odious category).

My favorite, however, are busts of secret police chiefs. I mean, what kind of a system celebrates the bad cops who arrest, torture, and murder people? Not just a few people. But thousands, even millions of them? I’ve got Felix Dzerzhinsky, also known as Iron Felix, the Polish communist who took over the newly formed All-Russian Extraordinary Commission, or Cheka, the first iteration of what eventually ended up as the better-known KGB. He died in 1926, so he was denied the opportunity to become a truly mass killer. His scraggly goatee makes him quite recognizable. All the commie notables showed up as his funeral to honor their designated murderer.

Even better is my bust of Lavrentiy Beria, Stalin’s factotum who was brought into what then was known as the People’s Commissariat for Internal Affairs, or NKVD, to end the Great Purge and move the country back to more normal brutal repression, when there had to be at least a slightly logical reason before you were imprisoned or killed. Beria, conspicuous with his pince-nez glasses, handled a little of everything, including executing his predecessor, murdering Poles after the Soviet Union swallowed half of that nation as part of the Hitler–Stalin pact, managing wartime armaments production, and overseeing the nuclear weapons program. Supremely competent, he was prepared to imprison or murder even close associates to advance his position. He also was a serial rapist. (Shortly after Stalin’s death, his colleagues arrested and executed him. Ironically, his international views were liberal and he might have ended the Cold War three decades early.) Just think of who would honor such a person. Having his bust on my desk offers inspiration of sorts, reminding me of man’s supreme inhumanity to man.

It might make sense to try to collect a rogue’s gallery of busts. I’ve been to the People’s Republic of China but haven’t yet bought one of Mao, perhaps because they seem so common, being sold openly today. It actually takes a bit of effort to get Beria, since his likeness is hardly a hot item jumping off shelves in Moscow. I’ve also thought of looking for busts of Pol Pot, though I don’t know if Brother No. 1 went in for such things. There probably is one out there of Nicolae Ceausescu, the Romanian dictator who was crazy even by Soviet standards. Although North Korea, which I’ve visited twice, is full of pictures and statues of “Great Leader” Kim Il-sung, I don’t remember seeing any busts on sale.

In contrast, owning a Hitler bust would just seem creepy. He represents a higher form of evil, dedicated to committing genocide, rather than merely engaging in mass murder or, more accurately, mass killing, incidental to preserving power, reengineering society, or some other evil yet comprehensible political goal. There also is the swastika. Anyone collecting German militaria from World War II will end up with items with swastikas on them. EBay won’t allow the sale of anything with that symbol, which has led to some elaborate photo fakery and coded descriptions.

A few years back, an analyst with a human rights group who collected German as well as U.S. military items posted a photo of himself wearing a sweatshirt with an Iron Cross and was accused of being a Nazi sympathizer. In fact, the Iron Cross is a military decoration created in 1813 by Prussia’s King Frederick William III and has nothing to do with the Nazis. The collector also was attacked for using Flak88 as his web identity and license plate. That referred to the German 88mm gun, which became famous through its use against both aircraft and tanks. It is one of the most recognizable weapons of World War II. I hesitate to confess, given the woke world in which we live, that I spent my high school years devouring books on that conflict and I bought a model of the 88, which sits atop a file cabinet, an unmistakable symbol of the war.

But he also was attacked for owning military items with a swastika, though doing so no more indicates sympathy with Nazism than owning an item with a hammer and sickle demonstrates belief in communism. In this case, the attacks on him were consciously dishonest and politically motivated — I wrote a column about it at the time — and misconstrued what collecting is about. I have some World War I and World War II German military items. The former display imperial symbols, the later swastikas. That is a tragic aspect of history. As it is with all my commie stuff, which means my house has many times as many depictions of the hammer and sickle as any other political symbol, including Republican and Democrat imagery. (Yes, I realize some American Spectator readers likely believe that the Democratic donkey and Communist hammer and sickle are one and the same!) Still, aware of the extra sensitivity I try to be careful in what I put in public spots likely to be seen by other people.

Of course, collecting goes to far more than politics. As I’ve detailed before, I have collected some “turtle ships”, which reflect the history of Korea, which I study. I’ve accumulated lots of M&M containers and other items, reflecting my status as a helpless chocoholic. There are many chess sets: though I enjoy playing the game, I am far better at collecting chess items of all sorts. I’ve picked up lead Civil War soldiers, from both North and South, which engage in combat atop file cabinets and other assorted surfaces. A bibliophile, I own miscellaneous well-illustrated war histories, especially of the Franco-Prussian War and World War I. My first such acquisitions came while I was in high school and living in the United Kingdom, where my Air Force father was stationed.

So the next time a public figure is attacked for something they collect, don’t worry. The Mao portrait probably doesn’t mean they are a commie dedicated to launching an American version of the Cultural Revolution. Rather, they might like collecting Warhol. Or political figures. Or they might want to be seen as trendy. Or perhaps they fell in love with the artistic interpretation of a historical figure. Maybe they liked the unique color scheme. Anyway, it could be worse. They could collect something really strange, like gravestones. Or death masks!

Still, just reading about the Loeffler contretemps got me thinking. I really need a Mao bust or two. I’m going to look for one on my next trip to China. But I really don’t want to wait that long. Maybe there’s something on eBay …