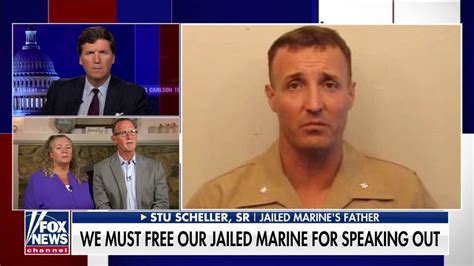 Today’s Five Quick Things promises to be actually quick, which is a departure from our usual mode.

1. Stu Scheller Shouldn’t Be In The Brig. The People Who Put Him There, Though…

Give credit to Tucker Carlson for making this point, though he’s hardly the only one. Earlier this week Carlson’s monologue pointed out the utter insanity of Ken McKenzie, Mark Milley and Lloyd Austin going in front of Congress and claiming they were bound by the chain of command to pull our troops out of Afghanistan before executing a plan to evacuate the civilians, with zero consequences, while Marine Lt. Col. Stuart Scheller now sits in the brig for having questioned the disastrous pullout.

Scheller spoke for thousands of officers in all the branches of the armed forces who were horrified at the blistering incompetence of the leadership. That’s clear. What’s also clear is how brittle that leadership is. For speaking out, Scheller was first relieved of his battalion command, then forced to undergo psychiatric testing because of his public criticism of the top military brass. He had a gag order placed on him, which he then broke.

And then Scheller was imprisoned. Nobody seems to know when he’ll be released.

Scheller didn’t contest his being relieved. He said his firing was justified. He knew it was coming and he accepted it – Scheller was willing to suffer the consequences to his career of speaking out against the Afghanistan debacle.

Putting him in the brig is just one more disgrace our military leadership appears ready to cover itself in. Scheller should be released immediately. The American people need to demand it, forcefully. In fact, it wouldn’t be a bad idea if military enlistment ground to a complete halt until Scheller is freed.

Maybe even until the accountability for the top brass for Afghanistan Scheller called for in the first place shows up. That McKenzie, Milley and Austin still have jobs is nothing short of incredible.

Almost 4 billion doses of ivermectin have been prescribed for humans, not horses, over the past 40 years. In fact, the CDC recommends all refugees coming to the U.S. from the Middle East, Asia, North Africa, Latin America, and the Caribbean receive this so-called dangerous horse medicine as a preemptive therapy. ivermectin is considered by the World Health Organization (WHO) to be an “essential medicine.” The Department of Homeland Security’s “quick reference” tool on COVID-19 mentioned how this life-saving drug reduced viral shedding duration in a clinical trial.

To date, there are at least 63 trials and 31 randomized controlled trials showing benefits to the use of ivermectin to fight COVID-19 prophylactically as well as for early and late-stage treatment. Ivermectin has been shown to inhibit the replication of many viruses, including SARS-CoV-2. It has strong anti-inflammatory properties and prevents transmission of COVID-19 when taken either before or after exposure to the virus.

Make no mistake, the evil, deadly, coordinated globalist attacks we are currently witnessing on Ivermectin will go down in history as a vicious crime against humanity; a grievous public health policy error that can only be explained by following the money. Many top doctors agree that hundreds of thousands of American lives could have been saved had early treatment protocols such as ivermectin and hydroxychloroquine not been so maliciously vilified by authority figures, some pharmaceutical companies, and healthcare providers who just so happen to have financial incentives to suppress the truth about these cheap, effective drugs.

That Big Government, Big Pharma and Big Hospital are getting away with what is a clear conspiracy to block the use of common and safe antiviral drugs which have demonstrable utility in lowering the risk of serious symptoms from COVID, either as a prophylactic or as an early-stage treatment, is one of the most disappointing facets of the mess we’re in. These people have way too much power and you’re now seeing the corruption you get when you put medicine into the public sector.

Sticking with the subject of COVID, or more properly the corrupt government/corporate response to it, have you read that “Spartacus Letter” making the rounds of the internet this week?

It’s got a lot of pretty technical stuff in it that you practically have to have a degree in biochemistry to truly assess, and it might be going off the tracks a bit at the end in talking about what’s in those vaccines. But most of it is at least thought-provoking – which of course is why there has been an effort to suppress it.

From the summary of the letter…

In a speech touting a Republican plan to strip out disaster relief from the Democrats’ budgetary bacchanal, Kennedy tore into Senate Majority Leader Chuck Schumer for his attempt to hold that relief hostage.

“Why are we fighting over this?” said Kennedy. “You know, nature abhors a moron. It is moronic for us to be having this fight when it can be so easily solved. Everything in Sen. McConnell’s legislation can easily pass this body with 70 votes, and we know it. And then Sen. Schumer can come right behind by simply amending the budget resolution, and our problems are solved.”

5. Netflix’s Midnight Mass Is Pretty Close To A Hate Crime Against Catholicism

It’s a horror series, and horror series are very often injurious to religion, but Midnight Mass, the new show on Netflix which has generated a lot of viewership and commentary, is extreme even within the genre.

I’m going to let out a big spoiler, which I wouldn’t do but for the offense Midnight Mass gives. The spoiler is that the show is all about vampires. Catholic vampires, as it turns out. It’s set on a little island in Washington, and the priest of the little church there who had made a pilgrimage to Israel and managed to get bitten by one, returns looking 40 years younger and claims he’s another priest. He performs what look like genuine miracles and begins preaching about a “new covenant” granting eternal life to his flock, but the whole thing turns into a vampire story with the message that gullible idiots who accept Catholic sacraments are inviting satanic evil and utter destruction into their lives.

It’s interesting at times, but the mixing of Catholic doctrine with vampirism – and of course the heroes turn out to be the Muslim sheriff, the lesbian doctor, the atheist ex-con and the “true Catholic” whose theology turns out to be some sort of Hindu pantheism – makes this show one of the most aggressive pop-culture attacks on the Catholic faith I can remember.

If Mike Flanagan, who directed this hot mess, wants to be really edgy, for his next show maybe he ought to explore the contradictions and insufficiencies of Islam. That’s surely a rich fountain from which a great horror story might be drawn, no?