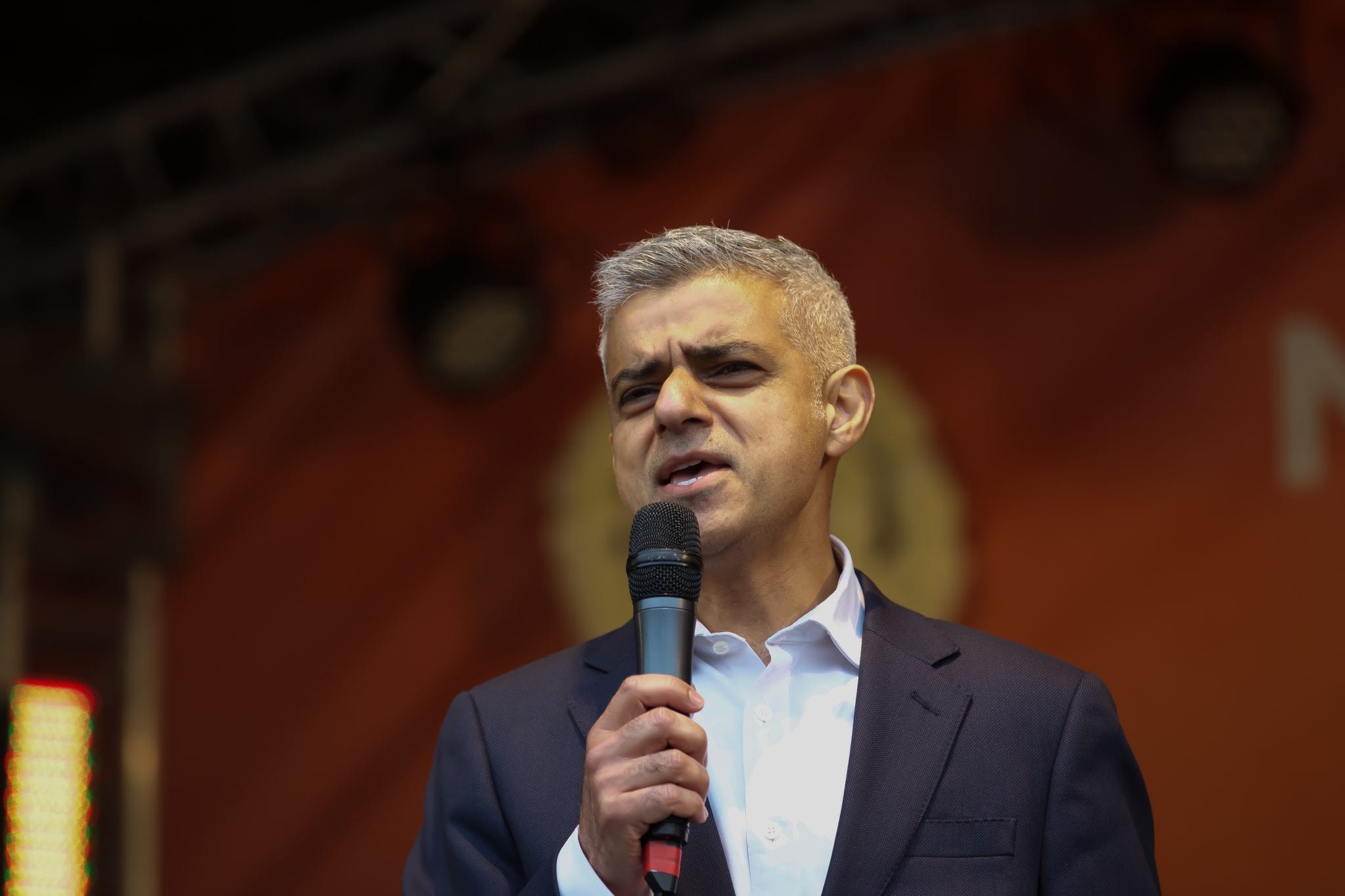 The mayor of London was not happy.

So with the president of the United States soon to arrive in the town over which Mayor Sadiq Khan presides, what better for Khan to do than take to the pages of the Observer, owned by the left-wing Old Order’s the Guardian, and attack Britain’s staunchest ally?

It’s un-British to roll out the red carpet for Donald Trump.

Among other things, London’s mayor said things like this as the president was still winging his way across the Atlantic, as yet to touch down on British soil:

Praising the “very fine people on both sides” when torch-wielding white supremacists and antisemites marched through the streets clashing with anti-racist campaigners. Threatening to veto a ban on the use of rape as a weapon of war. Setting an immigration policy that forcefully separates young children from their parents at the border. The deliberate use of xenophobia, racism and “otherness” as an electoral tactic. Introducing a travel ban to a number of predominately Muslim countries. Lying deliberately and repeatedly to the public.

No, these are not the actions of European dictators of the 1930s and 40s. Nor the military juntas of the 1970s and 80s. I’m not talking about Vladimir Putin or Kim Jong-un. These are the actions of the leader of our closest ally, the president of the United States of America.…

Donald Trump is just one of the most egregious examples of a growing global threat. The far right is on the rise around the world, threatening our hard-won rights and freedoms and the values that have defined our liberal, democratic societies for more than seventy years. Viktor Orbán in Hungary, Matteo Salvini in Italy, Marine Le Pen in France and Nigel Farage here in the UK are using the same divisive tropes of the fascists of the 20th century to garner support, but are using new sinister methods to deliver their message. And they are gaining ground and winning power and influence in places that would have been unthinkable just a few years ago.

In other words? The mayor of London took to print to tell one deliberate lie after another about the president of the United States — while spectacularly failing to conceal his own Old Order colors as someone who believes to his core that he is, along with his global Old Order elitist buddies, the intellectual and moral superior of, in this case, his fellow Brits. Not to mention the president and Trump-supporting Americans.

The projection of Mr. Khan staggers. The Old Order as it appears both in America and Britain is nothing if not authoritarian — make that totalitarian — in nature. The mayor, described in the UK’s Sun as an “avowed remainer” — which is to say a staunch opponent of Brexit — was furious that the British people, by popular vote, had decided Britain should leave the European Union and reclaim its own identity, out from under the control of un-elected bureaucrats in Brussels. So angry was he that the peasants were in open political revolt against his fellow elites that last September he called for another Brexit vote because, you know, the peasants got it horribly wrong and they must be forced to do as Old Order elites insist. The Old Order just knows better, you know?

To give Americans a flavor of just how Sadiq Khan rolls, there was this article on the pre-mayoral Mr. Khan in the Daily Mail of 2016. The British government can ban the entry of foreigners it deems unsuitable, and a while back they applied this policy by banning an American — an American named Minister Louis Farrakhan. Sadiq Khan took up Farrakhan’s cause and, as reported here in the UK’s Daily Mail, insisted:

“Mr Farrakhan is not anti-Semitic and does not preach a message of racial hatred and antagonism.”

Got that? Louis Farrakhan, as the Daily Mail also noted, quite accurately, is infamous for saying things like the following:

“Farrakhan is a hugely controversial figure who has denounced white people as ‘devils’ described Jews as ‘bloodsuckers’ and called Hitler a ‘very great man’.…

In 1990 Farrakhan sparked outrage after claiming Jewish people controlled the US “like a radar controls the movement of a great ship in the waters’ and had ‘got a stranglehold on the Congress’.

He has described Jews as ‘bloodsuckers’ who profited from the slave trade. Judaism he called a ‘dirty religion’ and a ‘gutter religion’.

‘The Jews don’t like Farrakhan, so they call me Hitler. Well Hitler was a great man.’

White people he said were ‘devils by nature’.”

All of that long on the record, nonetheless there was Sadiq Khan insisting that “Mr. Farrakhan is not anti-Semitic and does not preach a message of racial hatred and antagonism.”

In other words? Louis Farrakhan should be allowed into Britain, but the president of the United States, staunch friend of Israel and the Jewish people, the president with the Jewish daughter, son-in-law and grandchildren, should be snubbed.

As if to deliberately reinforce his blossoming reputation as an authoritarian-minded Old Order elitist, there was this story once Khan took office as mayor. As he himself noted in his piece demanding the British government refuse to “roll out the red carpet” for the president, one of Khan’s stated reasons for a snub of the President was that Trump had supported “introducing a travel ban to a number of predominately Muslim countries.”

Travel bans, in the Khan world view, are immoral. Unless.

Take note of this 2017 story in the UK’s Evening Standard: The headline?

In a story in which this was reported:

Sadiq Khan will today tell senior diplomats that the international community must show “moral leadership” by speaking out against Donald Trump’s travel ban.

The Mayor will urge global leaders to condemn the US President’s “cruel, prejudiced and counterproductive” policy as he hosts the largest ever gathering of ambassadors and dignitaries at City Hall.…

“As an international community, I believe we have a responsibility to show moral leadership and so my ask of you tonight is this: join me in speaking out against this ban and condemning it for what it really is — discriminatory, self-defeating and completely un-American.”

At the diplomatic reception tonight, the Mayor was set to add: “You don’t need me to tell you that there’s no contradiction between subscribing to Western values — of human rights, democracy, the rule of law and freedom of speech — and being a Muslim.

“Nor do you need me to tell you that targeting people for no reason other than their faith or their country of birth is cruel, prejudiced and counterproductive.”

Hmmm. Who was in attendance as the mayor attacked America and totally misrepresented the travel ban? That would be, as noted here, “11 dignitaries whose countries bar Israeli citizens from entering. Bangladesh, Brunei, Iran, Iraq, Kuwait, Lebanon, Libya, Pakistan, Sudan, United Arab Emirates and Yemen.”

About those travel bans targeting Jews the Mayor had not so much to say — meaning, nothing. Hypocrisy, much?

Let’s cut to the chase. The mayor of London is nothing more nor less than one more Old Order Swamp creature, British version. He will demand that the president of the United States be snubbed — while fighting to see that one of the most vicious and out-there anti-Semites in America, Louis Farrakhan, is admitted to Britain. He will denounce and misrepresent the travel ban — which was ultimately upheld by the U.S. Supreme Court — but blithely entertain the ambassadors of 11 Muslim countries whose countries have bans on the entry of Israeli citizens.

Make no mistake. Mayor Sadiq Khan is a hard left extremist who, like Old Order authoritarians everywhere, has a habit of projecting his own views and mindset on others — in this case President Donald Trump. Or Nigel Farage and Boris Johnson, Khan’s mayoral predecessor who is running to succeed the outgoing Theresa May as prime minister.

The good news is that in the recent elections in Britain for the UK’s representation in the European Union Parliament, the majority of Brits voted for Nigel Farage’s Brexit Party, with nine of the UK’s 12 regions making it clear they favored Brexit.

The back-and-forth between Sadiq Khan and Donald Trump is yet another reminder that the president’s new populism is in fact the leading voice for positive change from the smug, authoritarian elitist Old Order ways that have been holding back America — and Britain.

This populism is signaling the end of policies that has kept both countries from making themselves great again. In the words of President John F. Kennedy in his historic address to the nation on civil rights a full 56 years ago in June of 1963:

“A great change is at hand, and our task, our obligation, is to make that revolution, that change, peaceful and constructive for all.”

Exactly. And the leading agent of that quite positive change is Donald Trump — whether Sadiq Khan and his fellow Old Order elitists like it or not.

Jeffrey Lord, a contributing editor to The American Spectator, is a former aide to Ronald Reagan and Jack Kemp. An author and former CNN commentator, he writes from Pennsylvania at jlpa1@aol.com. His new book, Swamp Wars: Donald Trump and The New American Populism vs. The Old Order,  is now out from Bombardier Books.