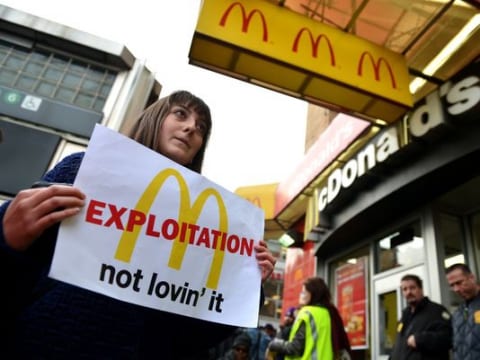 McDonald’s plans to phase out cheeseburgers from Happy Meals by 2022.

The fast-food kings look to provide a smaller serving of fries and include a choice of water, too. This seems as much a genuflection to market reality than penance for making America fat. People, even ones resembling Grimace, seek healthier eating options. This is especially true for parents buying meals for their kids. Who wants to buy their eight-year-old heart disease, even in small doses?

The move may come too late to save the place of McDonald’s atop other American eateries. Times, and tastes, change. Americans once drank Schlitz more than any other beer, watched boxing and horse racing religiously, and reflexively wore hats outdoors. We trick ourselves into believing that the world remains this way for good, that Facebook and Google and Apple, once entrenched, stay that way forever. But that someday changes, and the day that the world changes for McDonald’s is past tense.

One wonders if going healthy works as a healthy move for McDonald’s. Nobody, particularly a kid, goes to McDonald’s for Whole Foods. And it’s not as though the chain convinces the people who do not eat there to suddenly regard it as health food. They may just end up alienating much of their gluttonous clientele that craves sugary hamburgers and salty fries.

But they needed to do something. Americans not only ban toy giveaways in Happy Meals in some communities and turn their backs on cheap cheeseburgers, they hate clowns, too.