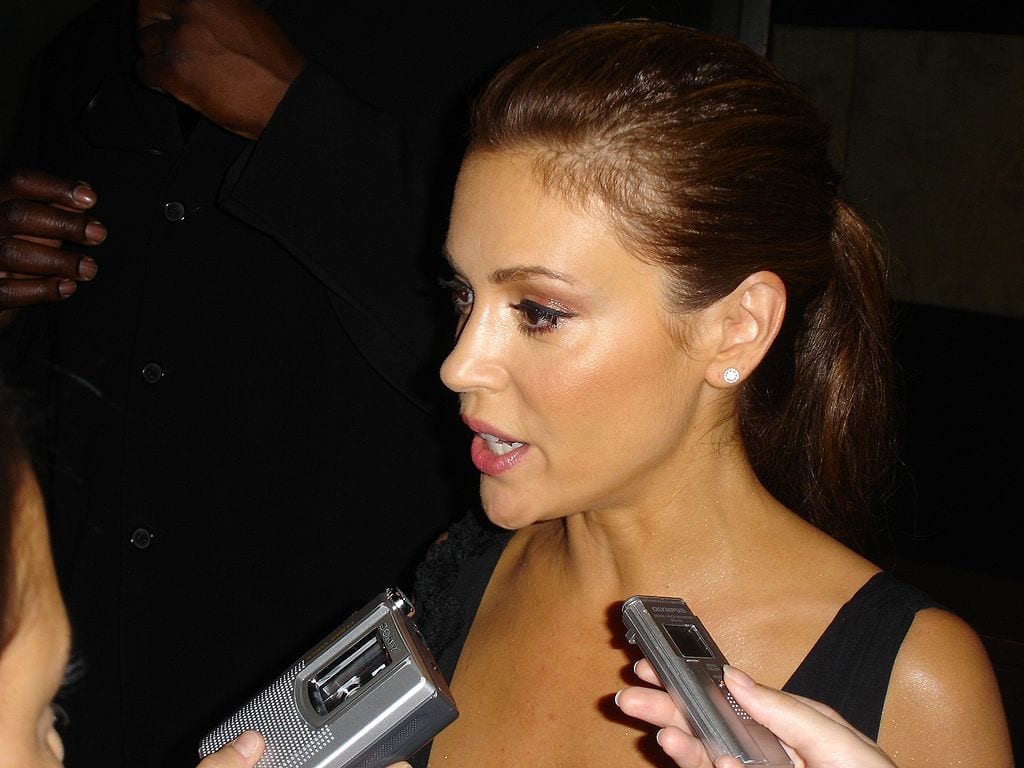 Recently, Supreme Court Associate Justice Ruth Bader Ginsburg, 85, took a nasty fall and fractured three ribs. The judge has endured several health problems in recent years, surviving two battles with cancer, having a heart stent implanted, and previously breaking ribs in 2012. As she is a stalwart liberal vote on the Court, the possibility that Ginsburg might now be forced to retire for health reasons horrified progressives. President Donald Trump would get to nominate another Supreme Court justice who might see the U.S. Constitution as something more than a list of suggestions written on rubber. Actress/activist Alyssa Milano rushed to tweet that the ailing Ginsburg “can have my ribs. And my kidneys and a lung. And anything else she needs. She can even have my husband on Thursdays.” It was quickly pointed out that this would be a fatal act of devotion, as even celebrity social justice warriors aren’t issued more than two kidneys at birth. Milano defenders responded that her words were humorous hyperbole intended to indicate the intensity of her admiration for Ginsburg. Probably so, but it is easy to suspect from other Milano remarks that this wasn’t quite accurate. If it were, why did she stingily refrain from rhetorically plunking both lungs down on the table? Whatever the case, Ginsburg would be wise to refuse the donation of Milano’s brain despite its being in nearly unused condition. As for her proffered husband, if Milano were hollowed out like a Halloween pumpkin, he wouldn’t be of any use to the actress on the other six days of the week or indeed, any days at all. Her organ offer does, however, suggest possibilities.

Suppose a Supreme Court justice did need a transplant to survive. Surely, a judge with a new kidney, liver, or elbow could remain on the Court if the resulting composite person were healthy. As medicine progresses, far more tinkering may be possible. Justices enjoy a lifetime appointment and future tech might greatly extend a justice’s life. When Ginsburg, good luck to her, celebrates her 90th, might a new liver help her reach 100? A new heart might take her odometer to 110. A well-crafted artificial one might carry her to 120 and beyond. If all her organs, excepting her brain, fail her and can’t be replaced, might it survive in a jar as oft depicted in sci-fi flicks? Or would devoted fans, like Milano, line up to have their brains scooped out of their skulls so Ginsburg’s could be tucked cozily inside the cranium of her choice? If no volunteers stepped forward, might a government partial to her brand of justice compel some less-esteemed citizen to volunteer. That might not be necessary for, as some predict, one day we may be able to upload our minds into sophisticated computers.

Would a Ginsburg 2.0 with silicon brain cells be accepted on the bench? If the process is perfected, her mind would be unaltered and, arguably, her thinking clearer than those of lesser, un-uploaded judges. They, being composed of fallible flesh, are subject to the flaws inherent to it that can cloud thinking — things like pain, fatigue, senility, and less-distracting problems such as indigestion and corns. Artificial intelligence programming could augment Robo-Ginsburg’s mind so she could review centuries of law, twist it, and generate a progressive decision in nanoseconds. Safe in a high-tech carapace, she might remain on the bench for centuries.

Progressives, as illustrated by the Justice Brett Kavanaugh smear, will go to unashamedly absurd lengths to control the Supreme Court, which they view as the means for creating a Social Justice utopia without having to go through all that tiresome business of elections and legislation. A softly humming, electronic Ginsburg in a box, with politically correct prejudices hard-wired in, would be a great asset to their schemes. Ginsburg’s upgrade would no doubt cost more than that of the fictional Six Million Dollar Man, but an online funding site could collect the needed cash (one did wonders for the bank account of Christine Balsey Ford). Multi-millionaire Hollywood progs, like Milano, could certainly spare the money. It would, quite literally, not cut as close as organ donation. Liberal tech billionaires could chip in and supply the required technical expertise.

Precautions to prevent bugs or viruses tainting Ginsburg’s judgment would be necessary. It would be embarrassing if she suddenly opined that human sacrifice is a religious practice protected by the Constitution or that a hacker living in his Mom’s basement should become His Majesty Chuck the First, Emperor of America, with young ladies similar in appearance to Milano drafted to be his coterie of concubines. Progressives would also insist that any programming that might alter Ginsburg’s political prejudices would be forbidden less their investment in her improvements be wasted. Just imagine their buyer’s remorse, if Ginsburg, with her thinking were now actually improved, abruptly decided that the Constitution wasn’t a living document that could be compelled to jump through flaming hoops into hitherto unknown penumbras.

The new Ginsburg could be set respectfully atop a marble pedestal with other justices added by her side as they shed their biological forms. If conservative cyborg justices, who managed to finance their electronic elevation by collecting refundable soda can deposits, were resistant to politically corrective re-programming, an “accidentally” kicked-out plug could render their opinions moot.

Progressive progress might not need to stop here. Anthony Levandowski, a former Google, Waymo, and Uber engineer, presently entangled in a legal battle over alleged theft of self-driving car secrets, has filed paperwork in California (where else) to establish a new religion. His religion, unlike other religions, which are based on faith in an immaterial god, will have a material god. He believes artificial intelligence will eventually create a hybrid computer-human being with abilities far beyond those of ordinary mortals. This super being, he claims, will grow more and more superior to ordinary human beings till it becomes godlike. While he admits it wouldn’t be able to raise thunder and fire off lightning bolts — at least in the immediate future — he firmly believes it will be far wiser than any human being alive. We should, he thinks, let it rule our lives, issuing new commandments based on its computations. He calls his church “Way of the Future.” If Justice Ginsburg is sufficiently incorporated into cybernetic form, she might become a deity in Levandowski’s faith. The question would then become for America: In what god do we trust?