Loose Canons,Top Story Afghanistan War,Michael Flynn,New York Times,Pakistan,President Trump,Taliban,Vladimir Putin Russia and the Taliban: Business as Usual - The American Spectator | USA News and Politics
Menu
Loose Canons
Russia and the Taliban: Business as Usual
Piling on against the president as U.S. withdraws from Afghanistan can only spell defeat.
by Jed Babbin
A U.S. gunnery sergeant on patrol in Helmand Province in 2013 (Dept. of Defense/Wikimedia Commons) 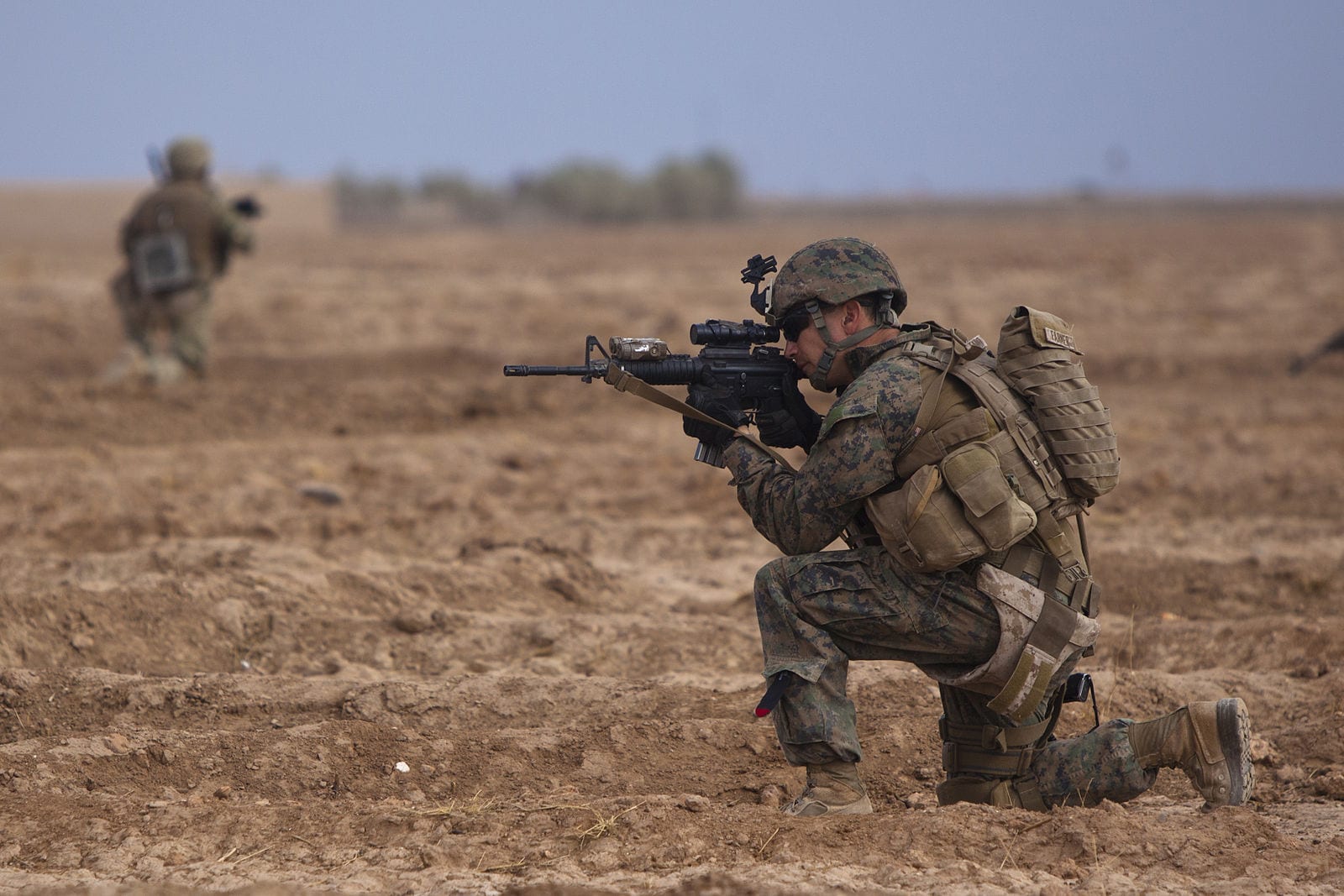 According to a string of New York Times and Washington Post stories that have been published since June 26, we’re supposed to be shocked that Russia would be paying bounties for Taliban fighters to kill American and coalition troops in Afghanistan. We’re supposed to be appalled that President Trump hasn’t done anything to hold Russia accountable for that action even though our intelligence agencies disagree on whether or not the bounties are being paid.

At the same time, the White House wants us to ignore the fact that, because of the Taliban’s Islamist ideology, President Trump should never have believed that the Taliban would live up to their obligations under the February 29, 2020, “peace deal” Trump made with them. We’ll get back to that in a minute.

The media feeding frenzy about the alleged Russia bounties — which echoes the old “Russia collusion” nonsense — comes at a convenient time for Trump’s media opponents.

The fact that the media willfully ignores is that for at least a decade, beginning many years before the February agreement, Russia has been supplying the Taliban with arms, funding, and intelligence information in its fight with us and our coalition. If Russia is paying bounties for killing U.S. and coalition troops — the intelligence agencies don’t agree that it is — it’s nothing more than business as usual between the Russians and the Taliban.

The Russians aren’t the only ones paying the Taliban to do their dirty work. Since before 9/11, Pakistan has been supporting the Taliban and other terrorist groups in Afghanistan. Iran and China are also reportedly sending arms and funding to the Taliban.

The New York Times story that a secret Russian army unit had been offering Taliban fighters bounties to kill U.S. and coalition troops was based on leaks planted by the president’s enemies in the intelligence community (IC). There evidently is no shortage of them in key IC positions.

The first Times story argued that any Russian involvement with the Taliban would constitute a huge escalation in their “so-called hybrid war against the United States.” But the Russians may have been paying those bounties for many years.

President Trump reacted by calling the Times story a hoax. But both the CIA and National Security Adviser Robert O’Brien, while condemning the leaks that led to the Times story, noticeably didn’t say that the Times report wasn’t true or that the Russians weren’t paying the Taliban to hunt U.S. scalps. The information was reportedly taken seriously enough to share with our coalition allies.

The result is the latest political firestorm accusing the president of ignoring that report rather than taking any action against Russia and being too soft on Russian President-for-Life Vladimir Putin. Some of the follow-on stories in the Times, the Washington Post, and other media charge him with creating an atmosphere in which the intelligence community are very reluctant to bring to Trump’s attention any negative intelligence regarding Russia.

The media feeding frenzy about the alleged Russia bounties — which echoes the old “Russia collusion” nonsense — comes at a convenient time for Trump’s media opponents. It’s laid on top of the allegations of Trump’s incompetence in John Bolton’s book — which is still getting enormous media play — and the announcement last week of a new Super PAC formed by “hundreds” of veterans of the Bush 43 administration who have gone to the dark side and are supporting Joe Biden in the November race.

As I wrote a couple weeks ago, Bolton’s book argues that the president is erratic, incompetent, and unable to deal with our allies or our enemies. His conclusions are debatable, but many of the incidents Bolton recounts demonstrate incidents when Trump has taken much too soft an approach to Putin. For example, in a 2018 news conference with Putin in Helsinki, Trump said he trusted Putin as much as he trusted our intelligence agencies in regard to Russia’s efforts to interfere in the 2016 election. As I wrote at the time, it was an outrageous statement for Trump to make even if he believed it.

That incident, and others like it, have to be judged in context. Trump has taken very tough actions against Russia, such as withdrawing from the Intermediate-Range Ballistic Missile and Open Skies treaties, which we were following and Russia was consistently violating. And he’s wisely refused to discuss an extension of Obama’s “New START” treaty with Russia unless China becomes a party to it. But to say, as Trump has, that no president has been tougher on Russia than he is simply false. (See, e.g., Reagan, Ronald.)

If and when Joe Biden can actually string a few words together that make sense, the allegations in the Bolton book, the Russia bounties story, and the formation of the anti-Trump Super PAC (“43 Alumni for Biden”) will figure significantly in the campaign. You can bet that the mediators of the coming presidential campaign debates will make sure of that.

Which brings us to the deal the president made with the Taliban in February.

The Afghanistan peace agreement was a weak, ill-advised attempt to paper over our suffering the same fate that the Soviet Union did in 1989, when they retreated from Afghanistan with their tails between their legs.

The key parts of the February agreement require the U.S. to gradually withdraw its troops from Afghanistan and imposes a duty on the Taliban to “not allow its members or other terrorist groups such as al-Qaida, to use the soil of Afghanistan to threaten the security of the United States and its allies.” If the conditions are met, we promise to withdraw from Afghanistan altogether by April 2021.

We have performed our obligation to reduce our troop strength to 8,600 by July of this year. And, as we knew they wouldn’t, the Taliban isn’t living up to its principal obligations.

Last week’s Defense Department report on the situation in Afghanistan informs us of a host of Taliban violations of their principal obligations under that agreement. It says, for example, that the Taliban are cooperating with al-Qaida and other terrorist groups including Lashkar-e-Taiba (the perpetrators of the 2008 Mumbai attack that killed at least 160 people) in safe havens on both sides of the Afghanistan–Pakistan border.

The report also says that the Taliban “contest” — meaning essentially control — significant parts of Afghanistan, a fact previously and consistently reported for years by the U.S. government’s Special Inspector General for Afghanistan Reconstruction. (The Trump administration decided to no longer publish those facts months ago.)

Can the president escape significant political damage from the Russia bounties reports? Can we finally — after almost 19 years of war in Afghanistan — get out of there? Unfortunately, the answer to the first question is no, and the answer to the second is not unless we accept defeat.

The February peace deal with the Taliban is, if anything, worse than the latest “soft on Russia” stories. Gen. Michael Flynn has already told you why.

As I have written for 14 years, the war against Islamic terrorists is a quasi-religious war. Terrorists such as the Taliban and their ilk are propelled by a religion-cum-ideology that precludes them from ending the war on any terms other than their victory. No matter how hard our negotiators try, there will never be a negotiated peace on any terms other than the terrorists’ victory unless and until their ideology is defeated.

In his book, The Field of Fight, Flynn laid out a plan for winning the war on our terms. The first element, according to Flynn, is, “Destroying the jihadi armies and killing or capturing their leaders.” The second element is, “Discrediting their ideology, which will be greatly helped by our military victories but which requires a serious program all its own.”

Flynn, an old intelligence hand, understands that without destroying the Islamist ideology, there can be no peace with the terrorist networks. Ever.

President Bush 43 refused to fight the ideological war, fearing that it would turn the entire Islamic world against us. President Obama peremptorily surrendered the ideological war in his 2009 Cairo speech. President Trump seems oblivious to the existential necessity to destroy the Islamist ideology.

When we pull the last of our troops out of Afghanistan, the Kabul government we support will fall in weeks or months to the Taliban. They will restore Afghanistan to what it was before the 9/11 attacks, a safe haven for terrorists such as al-Qaida to plan more attacks against us or our allies. It’s inconceivable that, under any future president, we would return to Afghanistan to win the war.

When the criminal case against Mike Flynn is finally over and his innocence re-established, Mr. Trump would be very well advised to return him to the job of national security adviser. It’s an unlikely outcome, but if it comes to pass the president might just give Flynn the chance to fight and win the ideological war.