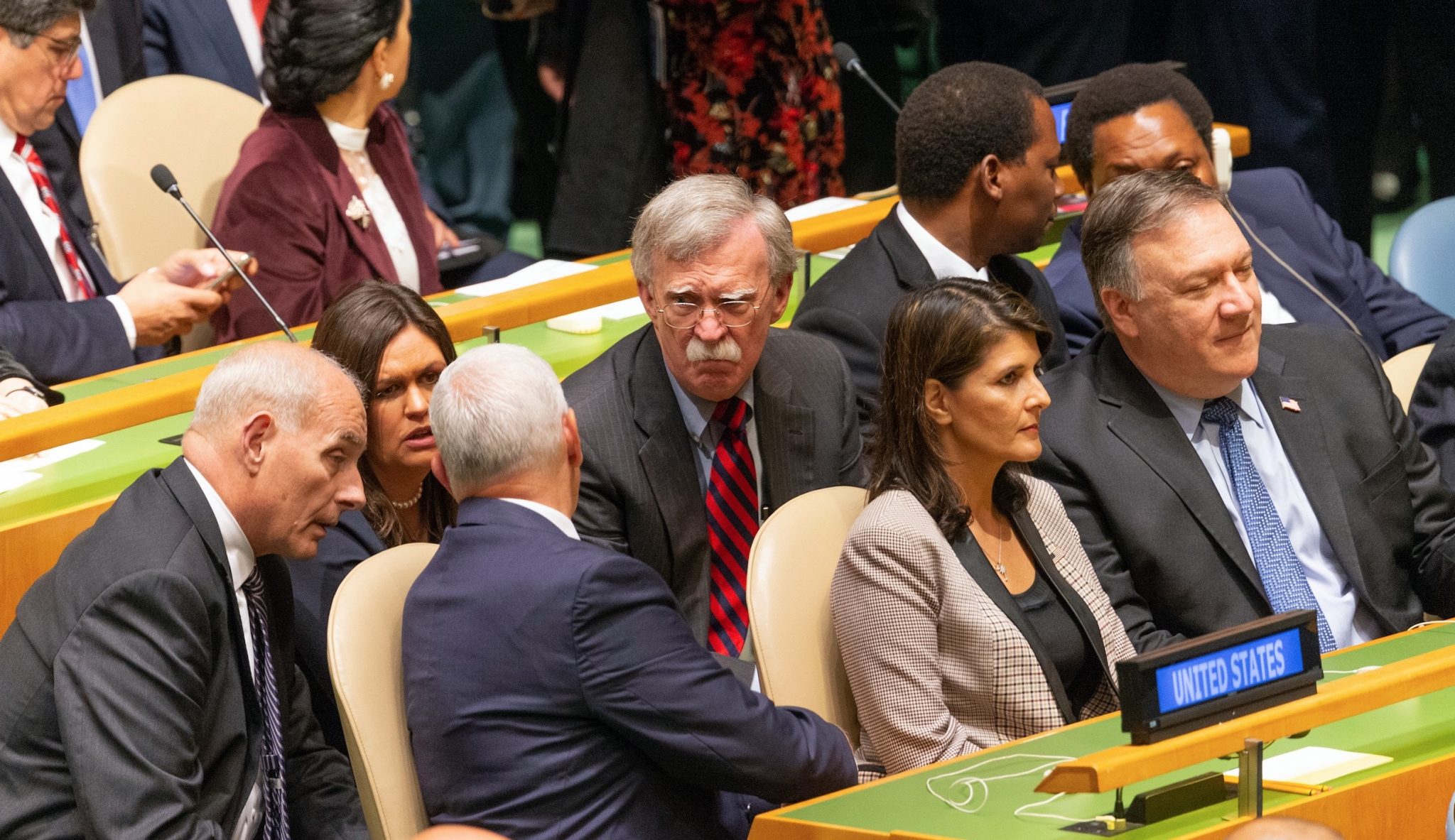 Reporters and columnists around the world are falling all over themselves to scour former national security adviser John Bolton’s White House memoir, The Room Where It Happened, for tidbits of criticism of President Trump. They don’t have to look hard to find them.

I have a slight advantage over most of the people commenting on Bolton’s book because I read it before writing about it.

Asking for “help” in terms of greatly increasing Chinese purchases of U.S. farm products was not in any way improper even if Trump couched it in terms of election help.

The book is a litany of complaints seeking to convince us that the president is erratic, incompetent, and incapable of running our government. That Trump knows the cost of everything but the value of nothing. After all the media hype, I read carefully to find the ultimate damnations from which Trump can’t recover. They just aren’t there.

While reading, I heard an echo from my youth of Peggy Lee singing, “Is That All There Is?”

As we know from real life, the accounts of direct witnesses to events can vary greatly. That brings us to the first problem with Bolton’s book.

Robert Lighthizer, the president’s Special Trade Representative, says he was present for the conversation in which Trump, according to Bolton, “pleaded” with Chinese President Xi Jinping to help him win the 2020 election by buying more U.S. farm products. Lighthizer said Bolton’s claim is “totally false.”

Lighthizer’s statement means that we can’t accept either his or Bolton’s version of that event. It also brings into question Bolton’s other claims.

The second problem is with Bolton’s many and varied condemnations of Trump. The BBC gleefully listed the “top ten” biggest claims that Bolton made. They range from the allegation of Trump asking Chinese President Xi Jinping to help him win the 2020 election to things such as Trump supposedly interfering with federal proceedings against foreign companies to gain favor with autocrats such as Xi or Turkish President Recep Tayyip Erdoğan.

Throughout Bolton’s 17-month tenure as President Trump’s national security adviser, he was a fervent note-taker in every meeting and on every occasion, always having a few legal pads at hand. And now we know why, because those notes, and Bolton’s personal recollections, apparently were the main source of this book, for good and ill, correct and incorrect.

John Bolton is a consummate bureaucrat, highly adept at operating in the White House snake pit. He spares very few, such as Vice President Mike Pence, from criticism. By his account, Secretary of the Treasury Steven Mnuchin is a weak “CYA” guy, former Secretary of Defense Jim Mattis too often counseled the president against military action, and Secretary of State Mike Pompeo played “hide the ball” whenever Bolton and Trump had to deal with matters within the State Department’s responsibilities. He makes a special effort to characterize then–UN ambassador Nikki Haley as a loose cannon.

Bolton’s book does contain some criticisms of Trump that have to be taken seriously. First among them is Trump’s reliance on his personal charm in dealing with both adversary and ally. That’s what every president does to some extent, but Trump, according to Bolton, carried it too far in dealing with China’s Xi, North Korea’s Kim Jong Un, Turkey’s Erdoğan, and Russia’s Vladimir Putin, among others. That accusation is right on target.

Bolton’s claim that Trump asked Xi for “help” in the 2020 election, whether it happened or not, was in the context of Trump’s pursuit of a trade for which he was willing to trade almost anything. Trump’s alleged approval of Xi’s establishing detention camps for Uighur Muslims, if true, is indefensible. But asking for “help” in terms of greatly increasing Chinese purchases of U.S. farm products was not in any way improper even if Trump couched it in terms of election help.

Bolton’s book claims that Trump has no conception of how to deal with allies or of the value of our principal alliances. That’s at least partially true because Trump’s education and experience didn’t give him the basic knowledge to do so.

Bolton claims that Trump often wanted to withdraw from NATO because the NATO countries, especially Germany, weren’t paying enough to NATO. That’s not the problem: the problem is that most NATO members don’t invest sufficiently in their own defense to help us defend them. Trump’s unhappiness with the deadbeats of NATO is profound and entirely justified. But his rants about withdrawal apparently no more than vent his frustration.

So, apparently, were the rants Trump engaged in about pulling troops out of South Korea, Afghanistan, and Iraq. But Trump’s decision to pull all U.S. forces out of Syria was serious and led to the resignation of Defense Secretary Mattis.

Trump’s rants also extended to his frustration with leaks, which leads to another criticism that has to be taken seriously. From the outset, Trump has never understood the maxim established in the Reagan era that “personnel is policy.” It’s very simple: if you don’t get the right people on your bus and the wrong people off, your agenda is dead on arrival.

Friends who have gone through the process with Trump’s “presidential personnel” staff as well as with those of prior Republican administrations say Trump’s personnel operation is the worst in memory. And, more than three years into Trump’s administration, there are still Obama holdovers in key positions.

The leaks led to one of the media’s favorite parts of Bolton’s book. After CNN reported on a high-level meeting about the proposed deal with the Taliban to get U.S. troops out of Afghanistan, Bolton says Trump exploded at CNN, saying, “These people should be executed, they are scumbags,” which led to “one of Trump’s favorite legal gambits” — that the Justice Department “should arrest reporters, force them to serve time in jail, and then demand they disclose their sources.”

Let’s stipulate that CNN’s “reporters” are what Trump allegedly called them and that saying they should be executed — if he said it — was absurd. Trump may not remember the jailing of New York Times reporter Judith Miller by Department of Justice Special Counsel Patrick Fitzgerald to force her to reveal a source. It didn’t work and won’t work with others. It was just another Trump rant that his staff knew to ignore.

Bolton claims that Trump’s famous withholding of military aid to Ukraine was improper but that the House’s impeachment of Trump on that basis — and on the basis of one of Trump’s conversations with Ukraine’s then-new President Zelensky — was “impeachment malpractice.” Bolton contends that had the House investigated Trump’s intervention in actions against the Chinese companies ZTE and Huawei and the Turkish bank Halkbank, the results could have been different. And more to Bolton’s liking.

But there is no evidence, other than Bolton’s claims, that Trump did anything illegal regarding those companies.

All of Bolton’s complaints apparently stem from the fact that, as he wrote, “Trump was not following any international grand strategy or even a consistent trajectory.” But that’s Trump. He’s not Henry Kissinger. And to the extent that criticism is correct, it was up to Bolton, Pompeo, and Mattis (later Defense Secretary Mark Esper) to devise and try to get Trump to follow such an international grand strategy. They didn’t.

Bolton’s book is little more than a partial outline for Joe Biden’s campaign. The book — and Bolton — will be media fixtures throughout the 2020 race.

There’s a lot more that could (and will) be said about Bolton’s claims and Trump’s actions as president. As to Bolton’s book, Peggy Lee sang its demise: