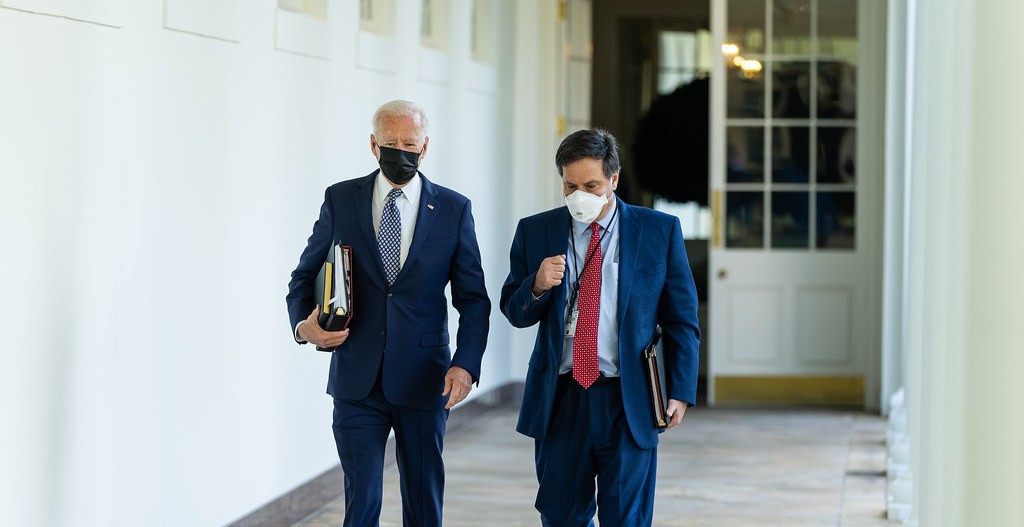 I didn’t get a chance to do this when he rode into office as Joe Biden’s chief of staff because the very nature of how he was able to ride in was quite occupying in itself. But now that he’s riding out, or perhaps scurrying out as a rat leaves a sinking ship, it’s an opportunity to talk about Ron Klain.

Let’s start with this: bye, Ron.

Klain sure does have a curriculum vitae. You’ll have to give him that. What you won’t see is a great deal of accomplishments that people not invested in the left-wing project of wrecking America as founded would appreciate. But for those so invested, Ron Klain has been considered Joe Biden’s brain.

And he’s been one of a small number of extremely powerful people whose presence around Biden provides a link from Pennsylvania Avenue to Belmont Road, where the Kalorama residence of one Barack Obama might be found.

Because Klain is an old Obama minion, though he was never quite on the first string.

After all, he was Vice President Joe Biden’s chief of staff from 2009 to 2011, which was a second tour of duty with Biden; the first came when Klain was the chief council for the Senate Judiciary Committee from 1989 to 1992. And yes, that was the time frame in which Biden conducted the shameful circus that was Clarence Thomas’ Supreme Court confirmation hearing, which happened in 1991.

You remember this, right?

That pitiable pageant belonged solely to Joe Biden — at least publicly. It should have ended his career, but it didn’t. If it had, though, it might well have ended Ron Klain’s since he was the man behind the scenes.

Instead, Klain moved up.

After that, he served as associate counsel to President Bill Clinton, working specifically on judicial nominations, and then in 1994 he was named as Attorney General Janet Reno’s chief of staff. The next year, he moved over to serve as Vice President Al Gore’s chief of staff,

And then Klain worked for Gore’s failed presidential bid, ultimately serving as general counsel for his “recount committee,” which attempted to steal the 2000 presidential election in Florida before the U.S. Supreme Court stepped in and put a stop to the endless counting of ballots in the Sunshine State.

That failure didn’t let much air out of his career either. Instead, he became a movie star by proxy. Kevin Spacey played Klain in an HBO movie that cast those efforts to count votes until Gore won Florida as heroic and just.

See if you can tell who’s creepier in this clip…

Then Klain got a job as a lobbyist for Fannie Mae, the quasi-governmental housing lending agency whose policies helped crash the housing market and tank the U.S. economy just before the 2008 presidential election. He left that position in 2005 and went to work for AOL cofounder Steve Case in various nonprofit and venture capital roles before catching on with the Obama campaign.

Which ended up reuniting him with Biden as his chief of staff.

But Klain was more than just Biden’s man. He was a key unofficial adviser to Obama who had promised that his administration would be largely free of the poisonous influence of lobbyists.

For example, during the implosion of the solar panel maker Solyndra, a mobbed-up Democrat zombie company that ate hundreds of millions of your dollars before it gave up the ghost, Klain was in on the debate about how tightly Obama should embrace the company. A USA Today article in October 2011 showed an email from Klain to Jarrett, who as it turned out was an owner of Solyndra stock, that read, in part, “the reality is that if POTUS visited 10 such places over the next 10 months, probably a few will be belly-up by election day 2012.”

Klain was also tabbed as the nation’s Ebola czar during the 2014 panic over that deadly virus making its way from West Africa to the U.S. He had no expertise in virology or epidemiology, but that didn’t matter to the Obama administration; it valued political loyalty and talent as a fixer within the government bureaucracy over actual expertise in management or knowledge of a subject matter.

But, for the most part, from 2011, when he left Biden’s employ, and 2020, when he joined Biden’s administration, Ron Klain worked for Steve Case. He had a role in Hillary Clinton’s failed 2016 campaign, and in 2020 he served as the Biden campaign’s COVID czar; during that time he was quoted in an interview with Wired magazine as saying, “If we’re going to make Covid-19 go away, we’re going to need a very high vaccination rate. The number one public health challenge of 2021 is going to be getting people to take the vaccine.”

In that interview, Klain also called Dr. Anthony Fauci, whose funding of gain-of-function experiments on bat coronaviruses at the Wuhan Institute of Virology almost certainly contributed to setting COVID-19 loose on humanity, a “national treasure.”

Which should give you a good indication of where the Biden administration’s psychopathic and unconstitutional insistence on injecting all of America with an experimental and ultimately ineffective gene therapy prone to cause blood clots, heart damage, and other ghastly side effects came from. It wasn’t medical science, it was the old Democrat political fixer and staff hack Biden depended on to serve as his brain.

But there’s something else to know about Ron Klain, something that hasn’t been given much of any notice at all despite its importance. And when you understand this about Klain, you will understand all you need to know about the sewer that is America’s ruling elite.

Because Ron Klain has been at the center of elite corruption and fraud since the mid-1980s — and he’s been rewarded richly for it.

In 1984, Klain was a first-year student at Harvard Law School, the same institution Barack Obama attended. But while Obama affiliated himself a few years later with black professors like Derrick Bell and Charles Ogletree, Klain’s mentor was the famous leftist legal scholar Laurence Tribe. Obama also worked as a research assistant for Tribe, in 1989.

In fact, Tribe had Klain ghostwrite much of God Save This Honorable Court: How the Choice of Supreme Court Justices Shapes Our History, which was published in early 1985. This was a common practice of Tribe’s; he was so notorious for hiring law students to write his books and ingesting passages of works from the Harvard Law Review that the Review itself mocked Tribe in a parody issue.

But God Save This Honorable Court didn’t steal from the Harvard Law Review. Instead, it lifted large tranches from a 1974 book on the Supreme Court, Justices and Presidents, which was published by Henry Abraham of the University of Virginia.

Nobody noticed that fact until Ogletree found himself in hot water over his own plagiarism in 2004, having stolen from Yale scholar Jack Balkin’s book, What Brown v. Board of Education Should Have Said, and copied Balkin’s work for his own book, All Deliberate Speed.

Tribe rushed in to defend Ogletree, which led several observers to revolt over the hypocrisy of the great larcenous leftist legal luminary. The conservative scholar Joseph Bottum lit into Tribe in a 5,000-word Weekly Standard piece for his brazen plagiarism, and a scandal was born.

And an investigation of Ogletree and Tribe and their plagiarism and fake scholarship was launched.

At the time, the dean of Harvard Law School was a well-respected young lawyer who had also worked as a Tribe ghostwriter: Elena Kagan. Kagan ignored the obvious conflict of interest in participating in the investigation, sat on the case for a while, and then ultimately threw it under the rug. That caused a stir among academic circles, but Harvard closed ranks around all involved.

Fast forward six years, and Obama appointed Kagan to the Supreme Court — on the advice of Ron Klain.

If, for example, you are Laurence Tribe in 1984, Harvard professor of law, leftist pillar of the establishment, you can “write” your magnum opus by using the products of your student assistant, Ron Klain. A decade later, after Klain admits to having written some parts of the book, and the other parts are found to be verbatim or paraphrases of a book published in 1974, you can claim (perhaps correctly) that your plagiarism was “inadvertent,” and you can count on the Law School’s dean, Elena Kagan, to appoint a committee including former and future Harvard president Derek Bok that issues a secret report that “closes” the incident. Incidentally, Kagan ends up a justice of the Supreme Court. Not one of these people did their jobs: the professor did not write the book himself, the assistant plagiarized instead of researching, the dean and the committee did not hold the professor accountable, and all ended up rewarded.

If you want to know why the lies and corruption are so pervasive within government, all you really have to do is look at the backgrounds and connections of the people metastasizing the rot. And Klain, would-be election thief, Supreme Court fixer, Obama hack, and ghost author of a plagiarized book, runs through 30 years of Democrat corruption in Washington.

We should be glad — no, ecstatic — that he’s gone. He’s done too much damage already.

But the problem is that Washington is full of Ron Klains. One less, blessed a circumstance as it may be, won’t save us.