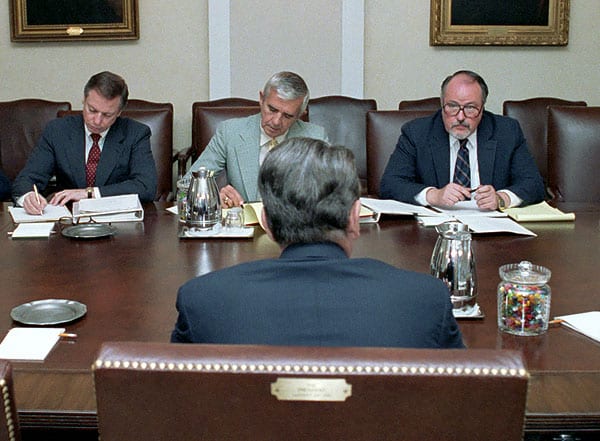 The sorry condition of the media makes the arrival of Man in the Arena, a documentary about Roger Ailes, particularly welcome. Were it not for Ailes, the late head of Fox News, the media would be even more of a monolithic propaganda machine. Ailes was a journalistic Archimedes, using the lever of Fox News to cover stories and viewpoints the mainstream media refused to touch. He “saved the First Amendment,” says Rudy Giuliani in the documentary. To the extent that Fox News remains a tribune of information and views otherwise banned by the mainstream media, it is thanks to the trailblazing of Roger Ailes. He proved that journalism grounded in common sense and defiant of left-wing propaganda could be at once relevant and enormously profitable.

“If I was to pick the most consequential conservative of the modern era, it would be Roger Ailes,” says Sen. Mitch McConnell.

“The release of ‘Man in the Arena’ is timely as our society debates the meaning of free speech and whether the search for truth is advanced by listening to other points of view,” Michael Barnes, the documentary’s director, said to the press. “My own perspective and bias is that truth emerges when multiple points of view are aired, and my aim with the film is to present Roger Ailes accurately and in context, to give viewers a deeper understanding of the high price that champions of free speech can pay, and to fascinate them with the incredible and unlikely story of a poor kid named Roger Ailes and the obstacles he continually overcame to succeed in many fields.”

As the documentary shows, Ailes paid a severe price for beating liberals. Their hatred of him grew in proportion to his effectiveness. Before starting Fox News, he had played, as a strategist, an instrumental role in the elections of three Republicans — Richard Nixon, Ronald Reagan, and George H. W. Bush. That was never forgotten.

“If I was to pick the most consequential conservative of the modern era, it would be Roger Ailes,” says Sen. Mitch McConnell. Ailes had an uncanny understanding of the American people, derived in part from his working-class roots. He referred to himself as a “former ditch-digger from Ohio.” He also suffered from hemophilia, a struggle the documentary captures particularly well.

Journalists, as the saying goes, are supposed to comfort the afflicted and afflict the comfortable. Ailes had an instinctive sympathy for underdogs. “You show me somebody who is getting the s–t kicked out of him, and my instincts immediately are to get into that fight,” Ailes said.

It was this anti-elitism that allowed him to see the potential for Fox News. The media was ignoring half of the country, and Fox could fill that void. The success Ailes found in this insight infuriated the media, which lay in wait for him to fall. When he did, after sexual harassment allegations caused his firing, they gleefully pounced.

The documentary contains comments from his wife, Beth, on Megyn Kelly’s motivation for taking him down:

Megyn Kelly was on the cover of a magazine and in the story she negotiated her contract in the press. Roger called her into her office and he told me that night what happened — he said to her, “You shouldn’t negotiate your contract in the press and you’re forgetting, Megyn, you’re not the only one who gets to decide if you stay at Fox.” When he told her that, Roger said her face changed. She turned on him in that very moment and he suspected she was leap-frogging him and going directly to the Murdochs to talk directly about her contract.

The sudden turn came not long after she said of Ailes, “I really care about Roger. And he has been nothing but good to me. And he’s been very loyal. And he’s had my back. And he’s looked out for me.”

The mainstream media has tried to define Ailes’ legacy according to this and other controversies, but Man in the Arena is a reminder that his legacy is much larger than that. At a time when the strictures of cancel culture grow ever more savage, his accomplishment at Fox News deserves fresh appreciation. He gave a voice to the voiceless.