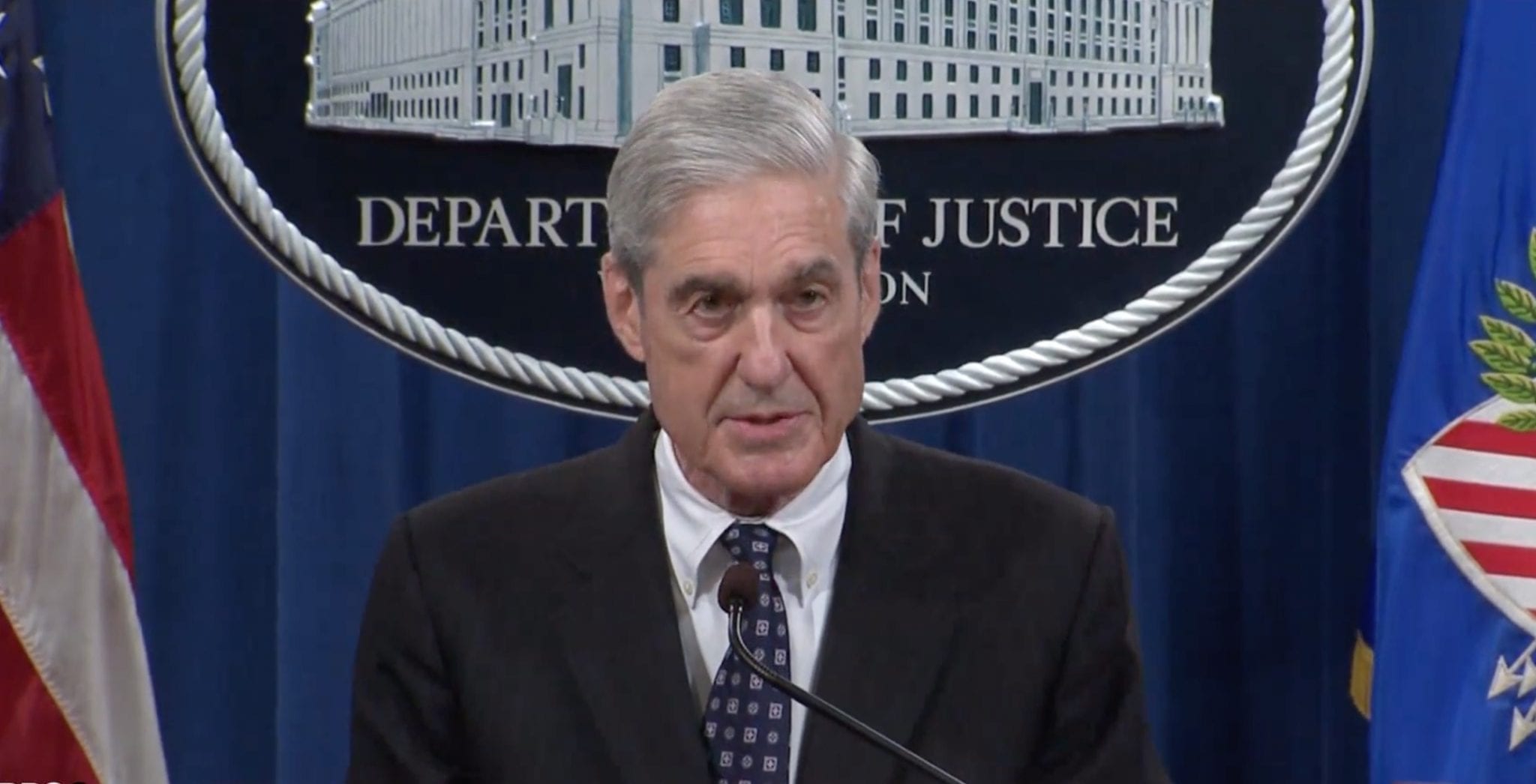 Everyone has met Robert Mueller. He’s the guest who won’t leave the party. You first notice him as an awkward presence gradually eroding the pleasant ambience by hovering silently at the edge of the festivities. Then, after he has had a couple of drinks, he begins to insert himself into random conversations with solipsistic non sequiturs. At length, after everyone else has contrived to leave early, you discover that he’s too drunk to drive even if he could find his keys. You call a cab, but he misses it and you find him asleep in your front yard the next day. This is what it’s like to get rid of someone like Mueller.

Having waited nearly two years for him to complete his investigation into Russian interference in the 2016 election, and been provided with a copy of his report by Attorney General Barr in March, we thought we were finally rid of this guy. Indeed, during his May 29 press conference, he promised to go home. The ostensible purpose of that bizarre event was to assure us that his report to the AG “speaks for itself” and that he had nothing to add: “The report is my testimony.” And yet, months later, he’s still hanging around and will now testify before the House Judiciary and Intelligence committees on July 17.

This was gleefully announced late Tuesday by House Judiciary Committee Chairman Jerrold Nadler (D-NY) and Adam Schiff (D-CA), the Chair of the House Intelligence Committee. Nadler and Schiff allegedly compelled a “reluctant” Mueller to appear pursuant to subpoenas issued by their committees. But the erstwhile special counsel has clearly been trailing his coat before the House since March, when he discovered that Attorney General Barr would not give Congress Mueller’s tendentious “executive summaries” before releasing the entire report. Thus Nadler and Schiff orchestrated a show trial:

Americans have demanded to hear directly from the Special Counsel so they can understand what he and his team examined, uncovered, and determined about Russia’s attack on our democracy, the Trump campaign’s acceptance and use of that help, and President Trump and his associates’ obstruction of the investigation into that attack. We look forward to hearing his testimony, as do all Americans.

Every syllable of this is nonsense, of course. The public has had access to the entire Mueller report, including his executive summaries, for two months. They know perfectly well what it says — President Trump isn’t guilty of colluding with the Russians or obstructing justice. Moreover, a solid majority of the voters want Nadler, Schiff, and their accomplices to move on from their interminable investigations and get to work on something useful: “Sixty-three percent of respondents said the investigations into Trump are hurting the country. While 58 percent said it’s time for Congress to turn the page.”

This would be a wise move for Nadler and Schiff. Bringing Mueller before the House Judiciary and Intelligence committees is not without risks for the Democrats. Those committees contain Republicans who have long wanted to ask Mueller questions about the oddly selective manner in which he pursued evidence, why he packed his team with overt Clinton partisans, what precisely was the provenance of the famously fishy FISA warrant used to justify spying on Trump campaign aides, etc. Liberal law professor Alan Dershowitz warns the Democrats that they may be “shooting themselves in the foot.”

Dershowitz is by no means the only Democrat who worries about the consequences of the Nadler and Schiff hearings. Douglas Schoen, a consultant who has worked with Bill Clinton and a wide variety of lesser Democratic lights, thinks the Mueller hearings are a bad idea. Mueller has pledged that he will give no testimony that isn’t covered by his report, so he is unlikely to allow the Democrats to tie him down further on whether he or his team found sufficient evidence to charge Trump with obstruction of justice. Thus, the hearings hold far more risk than potential gains for the Democrats. Schoen writes:

It would be a profound mistake for Democrats to yet again lose sight of what voters are concerned with and put all of their hopes on Robert Mueller to either impeach Trump or defeat him for re-election in 2020. Ultimately, if all the Democrats are looking for is to put on a televised political spectacle… the only thing they will end up with is four more years of Donald Trump in the White House.

If the Democrats want to know where these hearings are really going, they should listen to the eagerness with which the Republicans are looking forward to questioning Mueller. They would do well to heed the warning offered by Mark Meadows (R-NC), “This is the Democrats trying to resurrect a Russia collusion narrative that the American people are tired of. And yet, Mr. Mueller has not been subject to cross examination. He will be now.” Likewise, Lindsey Graham predicts, “This will blow up in their faces. The conclusions can’t change. There is no collusion. That’s what the whole thing was about to begin with.”

Robert Mueller is the Beltway counterpart of the guest who won’t leave. And, like that feckless character, he has nothing to offer those who invited him to the soirée yet doesn’t have enough sense to know it. In the Nadler and Schiff hearings, he will bore everyone with self-aggrandizing sermons that will irritate his hosts, frustrate their guests in the press gallery, and bore the public. If the Dems know what they’re doing, they will give Mueller the bum’s rush before the voters quietly slip out of their obviously dead party.