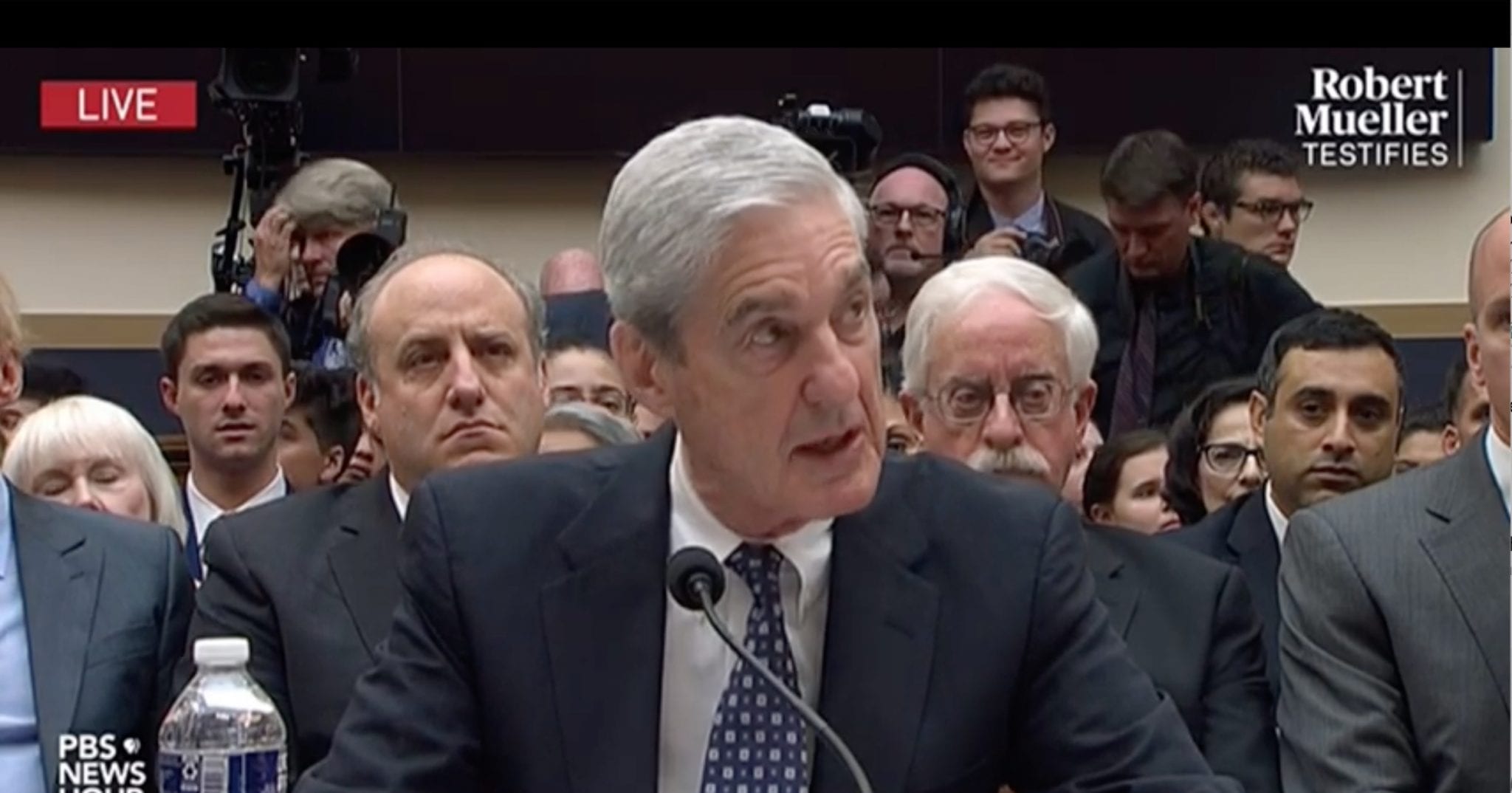 Robert Mueller’s Wednesday testimony before the House Judiciary and Intelligence Committees provided one piece of new information: now we know why he refused to take questions after his bizarre May 29 news conference. Indeed, the maundering and semi-coherent manner with which he answered the questions posed to him during Wednesday’s hearings suggests that he was probably never up to the job of running the special counsel investigation into Russian interference with our 2016 election. It also explains the peculiar legal reasoning that pervades the final report delivered to the attorney general. This is where he administered the lethal injection to impeachment.

Mueller’s excruciating testimony made it obvious that he was unfamiliar with crucial passages of the report that bears his name and important aspects of how “his” investigation was carried out. He also had obvious difficulty grasping the point of many questions he was asked. If he was this addled when he became special counsel, he would have had to delegate to various underlings the leadership of the probe as well as key prosecutorial decisions. We know that the lawyers he hired to carry out the investigation were Clinton partisans, including the infamous Andrew Weissmann, and this supports President Trump’s claim that the report was the work of “angry Democrats.”

As Jeffrey Lord put it in this space Wednesday afternoon, “There is no way in the world the confused, uncertain man testifying today actually ran the investigation he was charged with running.” In other words, the report is so tainted by Mueller’s obvious incapacity — combined with the notorious partisanship of the people who actually investigated the president and wrote the so-called Mueller report — that it will now be suicidal for the Democrats to pursue impeachment. The only pretext for that course of action was the outrageous assertion that the investigators were “unable to exonerate” Trump of obstructing justice. But most voters will now read “unable” as “unwilling.”

And they’re already tepid about impeachment. A recent NBC News/Wall Street Journal survey found that support for ousting Trump has plummeted: “The latest survey finds that 21 percent of registered voters say that there is enough evidence for Congress to begin impeachment hearings now.” A mere 2 of 10 Independents favor that course of action, and only 39 percent of Dem voters favor impeachment. The House Democrats who pushed Wednesday’s hearings hoped Mueller’s testimony would increase those numbers. They’ll be disappointed, because the Republicans did a good job of exposing the probe’s flaws. Here’s Rep. John Ratcliffe (R-Texas) lecturing Mueller for flouting special counsel rules:

You told us this morning and in your report that you made no determination so respectfully director, you didn’t follow the special counsel regulations. It clearly says, “Write a confidential report about decisions reached.” Nowhere in here does it say write a report about decisions that weren’t reached. You wrote 180 pages about decisions that weren’t reached about potential crimes that weren’t charged.… And respectfully, by doing that you managed to violate every principle in the most sacred of traditions about prosecutors not offering extra prosecutorial analysis about potential crimes that aren’t charged.

This refusal to follow the guidelines governing the conduct of the special counsel investigation was, of course, the pretext for the “unable to exonerate” finding. And Mueller was unable to defend it in legal or even rational terms. Later in the day, he received another lecture from Rep. Michael Turner (R-Ohio) about using that formulation to unfairly shift the burden of truth to the president. Every subject of an investigation — including the president of the United States — is presumed innocent until proven guilty. Rep. Turner began his questions by wielding several law books and pointing out that “exonerate” is not a legal term. He then goes on to admonish Mueller as follows:

Mr. Mueller, I want to focus on one word in your report. It’s the second to the last word. It’s “exonerate.”… What I’m putting up here is the United States code. This is where the attorney general gets his power, and the Constitution, and the annotated cases of these, which we’ve searched. We even went to your law schoo.… I thought maybe your law school teaches it differently. Mr. Mueller, nowhere in these is there a process or description on “exonerate.”… You don’t have the power or authority to exonerate Trump. You have no more power to declare him exonerated than you have the power to declare him Anderson Cooper.

Turner then explained what he quite accurately called the “real reason” this legally meaningless term was featured so conspicuously in the special counsel’s report. He pointed to a CNN screen featuring a huge chyron declaring, “MUELLER: TRUMP WAS NOT EXONERATED,” and emphasized the following: “This is the headline on all of the news channels while you were testifying today.… The statement about exoneration is misleading … and it has colored your entire report.” Mueller failed to defend himself or the investigation against this accusation. Nor was CNN or the rest of the “news” media prepared to report the facts. Neither they nor the Democrats are “into” facts.

The point of the hearings had little to do with reality and less to do with justice for President Trump. It was merely another attempt to wheel impeachment out of the ICU and force Mueller to do emergency surgery on the moribund patient. But, if it wasn’t already a goner, the aging G-Man delivered the coup de grâce. Resuscitation was “outside his purview,” as he would phrase it. It’s time for the Democrats to call the undertaker and give impeachment a decent burial. And they might want to purchase a plot for their House majority as well. Mueller’s reputation and impeachment weren’t Wednesday’s only casualties. Democratic credibility is also bleeding out.