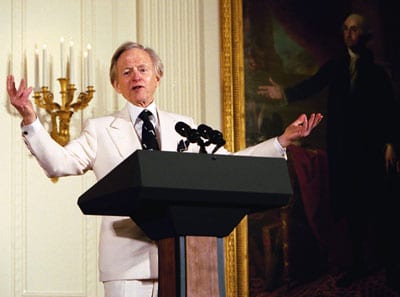 Tom Wolfe, who died Monday at 88 after an illness, would have been a first ballot member of the Writers’ Hall of Fame if he had only written Radical Chic and Mau-Mauing the Flak Catchers.

Happily, I didn’t stop with this one. Over the decades I also read, enjoyed, and benefited from The Right Stuff, The Painted Word, From Bauhaus to Our House, The Bonfire of the Vanities, A Man in Full, and The Kingdom of Speech. These books are both topical and timeless. They will be read for a long time.

Wolfe was a tireless researcher, fully immersing himself in the worlds he wrote about, which he then presented to us accurately. He was probably the most acute statustition over the past half century. For a guy who was so relentless in puncturing the pretentions, affectations, and status fantasies of others, I never understood the business about the white suits and the silly hats. But like the rest of us, he was entitled to his eccentricities.

I was privileged to meet Wolfe briefly at an appearance he made at the University of South Florida in Tampa in the late eighties. He was in a small auditorium in one of those buildings that weren’t there when my wife and I attended USF. Surprisingly, only about 30 students turned out to see him. Maybe that accounts for every student at USF who knew who he was. (Maybe I shouldn’t be surprised.) He talked briefly about his latest book, can’t remember now which one it was, and about writing in general. He was low-key, cordial, amusing, answered what he was asked completely. I was impressed. He was wearing his standard white kit, but without a silly hat.