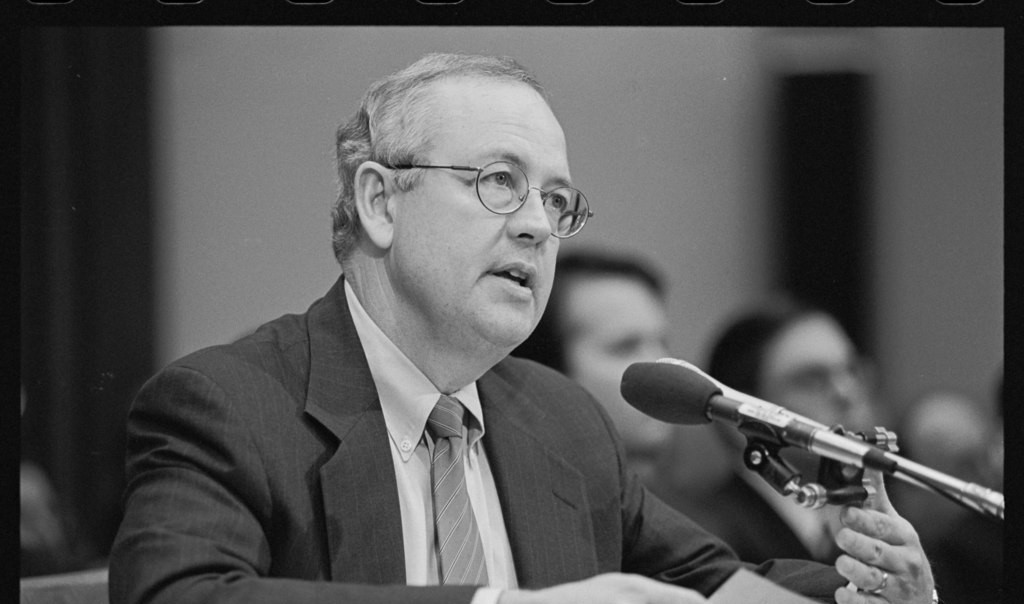 “He goes down by the Potomac and listens to hymns as the cleansing water of the Potomac goes by, and we’re going to wash all the Sodomites and fornicators out of town!”

The subject of Carville’s rant was an individual named Kenneth Starr. He was a good man, and yes, a devout man, but to liberals, he committed the unpardonable sin of exposing Bill Clinton’s almost pathological White House habit of exposing himself, including to his favorite intern, a girl named Monica Lewinsky. If ever the Oval Office played host to fornicators, it was courtesy of Bill Clinton. After Starr’s epic report was delivered to Congress in September 1998, the whole world knew it. And that was what really infuriated liberals: Their boy, Boy Clinton, as the founder of this publication immortally dubbed him, was busted.

The Starr Report detailed 18 months of presidential gifts and at least a half-dozen sexual encounters between Bill and Monica. Their trysts (too polite a word to describe their curious sessions) occurred between November 15, 1995, and March 29, 1997 — quite audaciously, the peak of Clinton’s reelection campaign. The first took place the same day that Clinton signed a “National Family Week” proclamation.

Among the shocking revelations in the Starr Report was one describing how Clinton honored Easter Sunday, April 7, 1996 — ironically, something that never received the religious ridicule of Serpent Head. Bill had spent the morning at church, listening to hymns, and then he headed back to the White House. He was in the Oval Office all afternoon, from 2:21 to 7:48 p.m., according to the exacting details of the Starr Report. He fetched Monica from her apartment, calling her in to take care of something. No doubt to sharpen pencils and make some photocopies.

Bill told Monica to come to the White House. She followed the commander-in-chief’s orders. An officer admitted the crafty intern to the Oval Office at 4:56 p.m. for her unorthodox date with the leader of the free world.

As the Starr Report described vividly, Monica and Hillary Clinton’s husband there had a “sexual encounter” in the White House “study.” It was no quickie, given that Bill, known back home as the Arkansas Marvel, was being constantly interrupted by additional affairs of state. But Bill Clinton could multitask, as the Starr Report laid bare.

An unidentified “someone” hollered to the president from the Oval Office, telling him he had a phone call. The multitasker tugged Monica back to the office with him, requesting that the intern continue giving him oral sex while he spoke on the phone. No time to waste. Monica obliged. Her memory of all the slimy details (oral and auditory) was uncanny: Lewinsky told Starr’s investigators that she thought the caller might have been Dick Morris. When Starr’s crackerjack team examined the phone logs, they found that Clinton had in fact spoken to “Richard Morris” from 5:11 to 5:20 p.m. that day.

Bingo! Monica was not making up this stuff, even as her presidential boyfriend later curled his lip and sternly wagged his finger at the American public and reprimanded those thinking he might have had “sexual relations with that woman, Miss Lewinsky.”

Monica’s information to Starr’s team checked out. She had finished up at 5:28 p.m., Easter Sunday.

Again, no rage from James Carville about fornicators there.

Perhaps no one captured the surreal absurdity of the scene quite like our intrepid founder and editor of The American Spectator, R. Emmett Tyrrell, Jr.

Tyrrell, of course, was not surprised by this behavior from Bill Clinton. His magazine had fearlessly and often hilariously documented the president’s exploits before anyone else. The American Spectator had tried to warn the American public of this kind of Clintonian behavior. For that sin, he and his magazine were tarred and feathered like Ken Starr. But the critics should have listened, because such antics by Bill ultimately led to his own demise, namely, impeachment.

Tyrrell summed it up in a piece titled “The President’s Impeachment” in the February 1999 issue. There, he led with the Starr Report.

“Who is responsible for the Impeachment of William Jefferson Clinton?” Tyrrell began. He could have said, “We, The American Spectator. We are responsible.” But instead, he framed the answer this way:

Start with the Starr Report. In any other decade of the modern era, the literary set would esteem it a work of art. Kenneth Starr’s report bids fair to become a classic, a bawdy epic, weighing in somewhere between Chaucer’s Canterbury Tales and Rabelais’ Gargantua and Pantagruel. In Starr’s great work, we read of our big lovable lug of a president lumbering through the West Wing of the White House during the 1995 Government Shutdown. A simple pizza brings him and the shapely Monica together. She rouses his jumpy libido with a saucy display of her historic “thong underpants.” They rendezvous by the presidential toilet, and vavavavooom!

The editor-in-chief of The American Spectator — who doubled as Boy Clinton’s biggest nemesis — was just warming up. His narration of Bill’s wild White House adventures continued:

Tyrrell regretted that in his summation “perhaps I do not quite have the above chronology right.” He continued, “I am not a literary scholar, but all the major facts are here.”

Yes, they were, thanks to Starr and his team. They had the unseemly task of cobbling together this sordid tale.

No, this was not what the mild-mannered Starr had learned in Sunday School. I’m sure the poor man would rather have listened to hymns down at the Potomac. In fact, he surely would have preferred listening to James Carville howl down at the Potomac. Anything but this madness!

But alas, the stoic and blushing attorney had a job to do. He was tasked to expose Bill Clinton, and few presidents ever exposed themselves like Bill Clinton did. Clinton made it easy for Starr, albeit uncomfortable.

Again, as readers here know, The American Spectator had chronicled such Clintonian behavior long before Monica sashayed into the “study.” It had been the reporting of The American Spectator, initially in David Brock’s January 1994 article (“Living with the Clintons”) that mentioned Paula Jones (by first name only), that ultimately led to the process of Clinton’s impeachment.

And more broadly speaking, the salacious details in the magazine’s articles on Clinton from 1992–1994 were fully vindicated by what Starr and his team reported in 1998. They were astonishingly predictive of Bill’s later behavior in the Oval Office. And yet, all along, liberals ignored it, until it eventually bit Bill Clinton.

Sadly, I’ve shared this tawdry walk down memory lane because Ken Starr unexpectedly passed away last week at age 76. This article is not the best tribute to the man — a gentleman (click here for a fine tribute by his colleague Paul McNulty, president of Grove City College). I met Starr once, and he was just that: a gentleman. The liberals denounced him as a scoundrel, but they were sizing up the wrong guy there.

Starr was thrust into an ugly spotlight by a cad, a former governor from Little Rock who was a better fit for Hugh Hefner’s Playboy Mansion than the White House. Starr was left a nasty task. To chronicle how Bill Clinton conducted himself from the Oval Office was not the sort of job that Starr, a distinctly Christian attorney, would have wanted. Liberals who didn’t like what Starr dug up really should have focused their Carvillian-like rage not at Ken Starr but at their Boy President. Instead, Starr became their bad boy. Go figure.

May Kenneth Starr rest in peace, eternally in a better place, gloriously forever removed from the Clinton frat house at 1600 Pennsylvania Avenue in the 1990s.