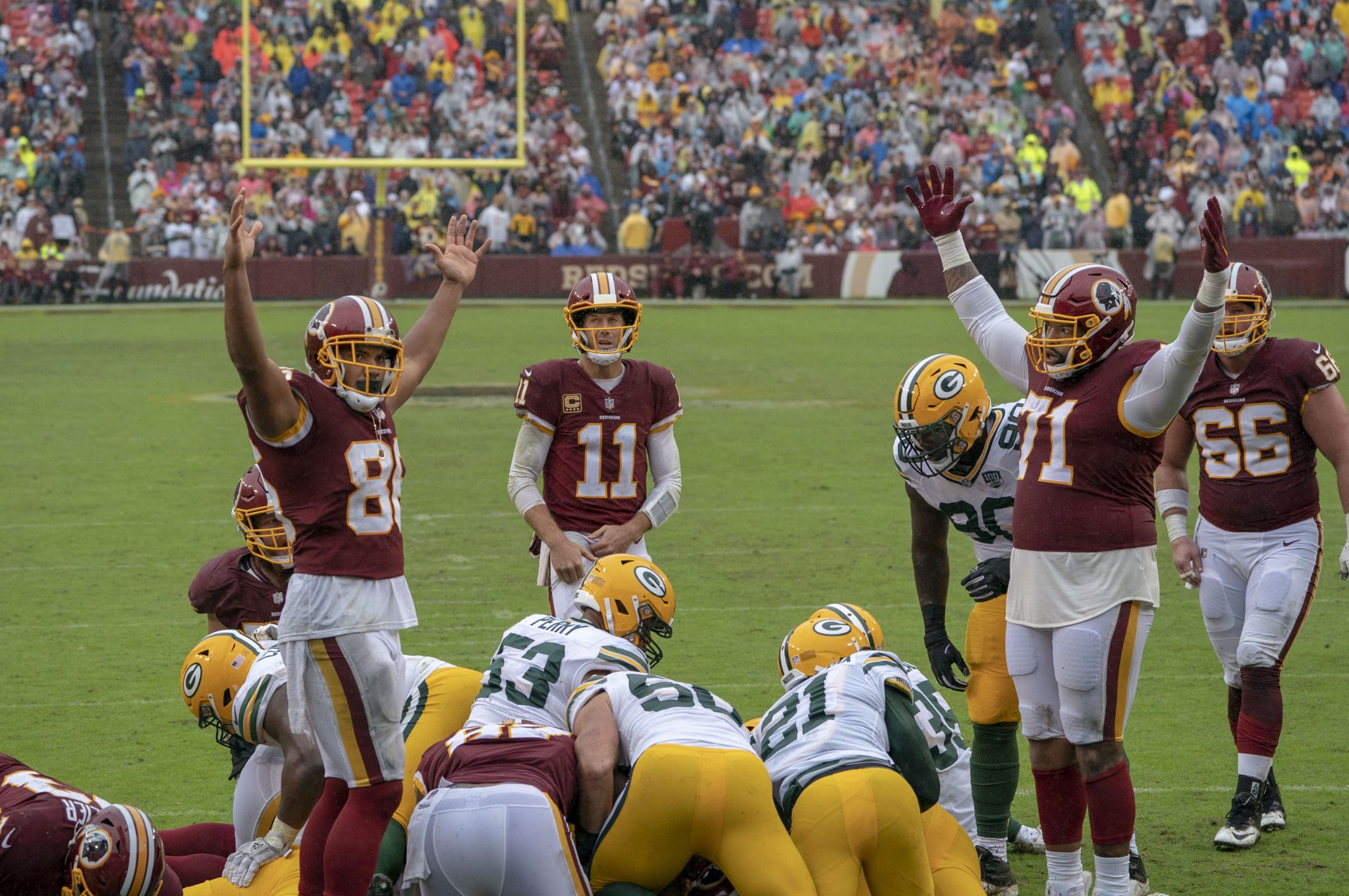 Any word is a degree of separation or two from controversy. That’s a reality facing the Washington Football Team, formerly known as the Redskins, as they choose a new name. Virtually anything can be found to have repugnant associations, and this poses a barrier if one is trying to cleanse a team name, or more generally the American culture, of tainted ideas or their representations. To further illustrate the point, let’s look at all of the current NFL team nicknames through a post-modernist, neo-Marxist lens.

Webster defines “patriot” as “a person who loves and strongly supports or fights for his or her country.” The name evokes nationalism, which is by definition exclusionary.

Private jets (which NFL teams use) are symbols of wealth, privilege, and gross economic inequality. In addition, the color “jet black” has often been used as a caricature or misrepresentation of a black person’s skin color. See Golliwog or Pretty Little Thing ads.

Buffalo Bill Cody was an American soldier-turned-showman, and, as documented in Sorrow of the Earth: Buffalo Bill, Sitting Bull and the Tragedy of Show Business by E. Vuillard, he paraded Native Americans around in his circus-like road shows, often to abuse and humiliation by audiences.

As described in Signs and Mysteries: Revealing Ancient Christian Symbols, by M. Aquilina, dolphins were used in early Christian art to represent Christ. The name is thus religiously prejudicial.

Odin’s Raven is a Viking symbol that has been misappropriated by neo-Nazi groups (e.g., see Odin’s Chosen protests in Fredericksburg, Virginia) to help propagate their messages of racism and white supremacy. See also Minnesota Vikings, below.

Tigers have been symbols of imperial racism, particularly in India, where the first Prime Minister, Pandit Jawaharlal Nehru, wrote of “the tiger qualities of an imperial race,” in reference to the English. Bengal is a region including part of India and Bangladesh where British colonial war policies helped bring on the famine of 1943, which killed two to three million people.

The term “brown” or “Brown American” has been used as a term in popular culture for some South Asian Americans, Hispanics, and Luso Latinos.

“Texas” is derived from the Caddo word “Taysha,” which the Spaniards spelled as “Tejas.” The Caddo are a group of Native American tribes who at their height occupied much of East Texas and nearby areas, numbering upwards of 200,000 people. Exposure to European epidemic diseases led to a catastrophic decline in the population to 10,000 by the late 1600s.

“Colt” evokes Samuel Colt, the inventor who made the mass production of revolvers commercially viable (e.g., “Colt 45”). He was a “copperhead” — a Northerner who opposed Lincoln — and sold weapons to both sides during the Civil War. He monitored his employees’ voting patterns and fired “black republicans.”

Jaguars were rulers of the underworld in Mayan culture. Jaguar Paw is the hero in the Mel Gibson film Apocalypto, which has been accused of conveying racist messages about Mayan peoples and Native Americans more generally.

“Grand Titan” was a title in the Ku Klux Klan hierarchy for the head of a congressional district or “Dominion.”

Bucking broncos are symbolic of rodeos, which historically marginalized blacks, Hispanics, and women. See Gender, Whiteness, and Power in Rodeo, by Patton and Schedlock.

“Chief” is a (mostly outdated) term for leaders at various levels of tribal societies. It is often considered derogatory when used by outsiders to refer to or address Native Americans.

Various confederate units that fought in the Civil War were known as “Raiders.” Morgan’s Raiders were cavalrymen under the command of Gen. John Hunt Morgan. Quantrill’s Raiders were pro-Confederate guerillas who fought under William Quantrill.

A charger is an appliance for inserting a charge of powder or shot into a gun. The term thus evokes firearms, which can be symbols of oppression.

The Giants of Greek and Roman mythology were a superior race of men, endowed with great strength and aggression. The name thereby evokes notions of racial superiority.

In the ancient world the eagle was the bird of emperors, and later the double eagle became a symbol of multiple empires, including the Holy Roman Empire. In the 1920s, the eagle was used as a symbol of the Nazi Party in Germany, and it has been adopted by modern-day neo-Nazi groups.

There is no nickname here, but George Washington owned slaves for 56 years. The word “football” itself is thought to have been used in Medieval Europe to refer to games played “on foot” by peasants, as opposed to games played on horseback by the aristocracy. In fact, the phrase “you base football player” is used as an insult in King Lear.

“Bears” in the stock market are investors who bet that stocks will go down, thereby profiting handsomely while most ordinary investors (e.g., most owners of 401K plans) watch the destruction of their nest eggs. In this way, the bear is symbolic of capitalist exploitation.

The lion is a symbol of power and domination. See political criticisms of The Lion King. The Lion and the Sun is a symbol associated with pre-revolutionary Iran and is thought by some to represent oppressive Westernizing monarchy.

“Packer” is a slang term for a fake penis and a derogatory term for a homosexual man.

It can also refer to a “body packer” or “mule,” an individual who smuggles illegal drugs by ingesting packs full of them.

The Vikings were raiders and traders from southern Scandinavia in the eighth to 11th centuries. Although there is historical evidence that they were multiracial, they have been held up as symbols of white supremacy, e.g., by Nazis in the 1930s, who imagined them as their Germanic predecessors, and by modern-day white supremacists.

In the ancient world, the falcon was seen as the bird of princes. The Egyptian pharaohs, who often presided over tens of thousands of slaves, were considered the living embodiment of the falcon-god, Horus. Falcons were released at their funerals.

The name “Panthers” evokes the “Black Panthers,” a political party founded in 1966 to challenge police brutality against black Americans. Use of the term trivializes that movement.

“Saint” is a religious term that most Americans identify as Christian, thereby making it exclusionary to non-believers.

Buccaneers were pirates who in the 1600s and 1700s not only attacked Spanish ships in the Caribbean but also pillaged and plundered coastal areas. Use of the term celebrates violence against innocents and thereby mocks legitimate anti-establishment action.

“Cardinal” is a religious term indicating a high-ranking position within the Catholic or Anglican church hierarchy, and as such its use as a team name is exclusionary to members of other religions and non-believers.

“Ram” has various religious connections. In the Bible, the ram is a symbol of God’s provision. “Jai Shri Ram” is an allusion to the Hindu deity Ram, and the phrase has been used as a rallying cry by far-right groups in India against a Muslim minority.

“49er” refers to an individual who participated in the California Gold Rush of the 1840s and ’50s, which had a severe impact on the indigenous peoples and environment of California. The Native American population of the region is estimated to have dropped from some 300,000 before European Americans arrived to 30,000 by 1870.

Skuas (sea hawks) are kleptoparasites — they wait for a gull or other bird to catch a fish and then steal it. They kill penguin chicks and other birds. More generally, hawks are swift, ferocious predators and have been often used as symbols of military might. Politically, a “hawk” is someone who is more apt to favor military aggression than peaceful negotiation.

This list isn’t meant to parody the neo-Marxist, “cancel culture” point of view, which seems to be growing in popularity by the day, as much as to illustrate what’s wrong with it. If every NFL team were to adopt a new nickname tomorrow, we would likely be able to repeat the above exercise with ease and similar results. And this could go on indefinitely. There was more material on this first pass, in fact, that was edited out for length.

This is no doubt part of the reason why the Washington Football Team announced in July that it will go without a nickname at least through the end of this season. The natural connectedness of ideas means that the search for links to inequitable power relationships will almost always bear fruit. So, the cost of decontamination is sterility. Just as important, the identification of these links often amounts to “biased sampling”: one can always choose the worst relationships of a word, symbol, individual, or institution and present them as characteristic. Obviously, that is misleading, and the extirpation that can result is costly.

The conclusion to draw is not that every NFL team nickname is equally offensive or that our cultural symbols never need updating. But when we pledge to rid a sports league, or more broadly a culture, of its negative associations, we risk committing ourselves to the cancellation of much more than we might have at first expected.