WORCESTER, Mass. – Supporters of Republican Scott Brown lined the sides of a street here outside a Democratic rally at Worcester Polytechnic Institute where former President Bill Clinton came to campaign for Martha Coakley.

More than 75 boosters of the GOP candidate turned out for the counter-rally, standing the sub-freezing weather to wave Brown signs and loudly sing (to the tune of “Battle Hymn of the Republic”), “Glory, Hallelujah . . . Send Scott Brown to D.C.!”

Among the Brown supporters were – believe it or not – rank-and-file members of the Service Employees International Union.

“We’re Americans – we have our free choice,” said one of the SEIU members, who identified herself only as Michelle and said she drove more than 60 miles from Western Massachusetts – “The stepchild of this state” – to show her support for Brown in Worcester.

Not only is Michelle a Brown supporter, but she’s also a Tea Party activist who rode 10 hours on a bus to attend last year’s 9/12 March on D.C. “I didn’t like the slide into socialism,” she explained.

Michelle is aware of the importance of Tuesday’s election. 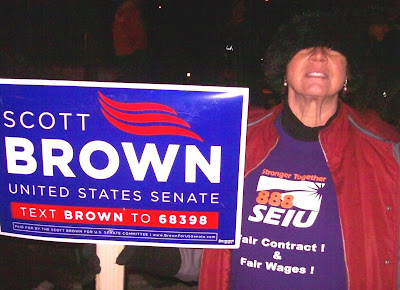