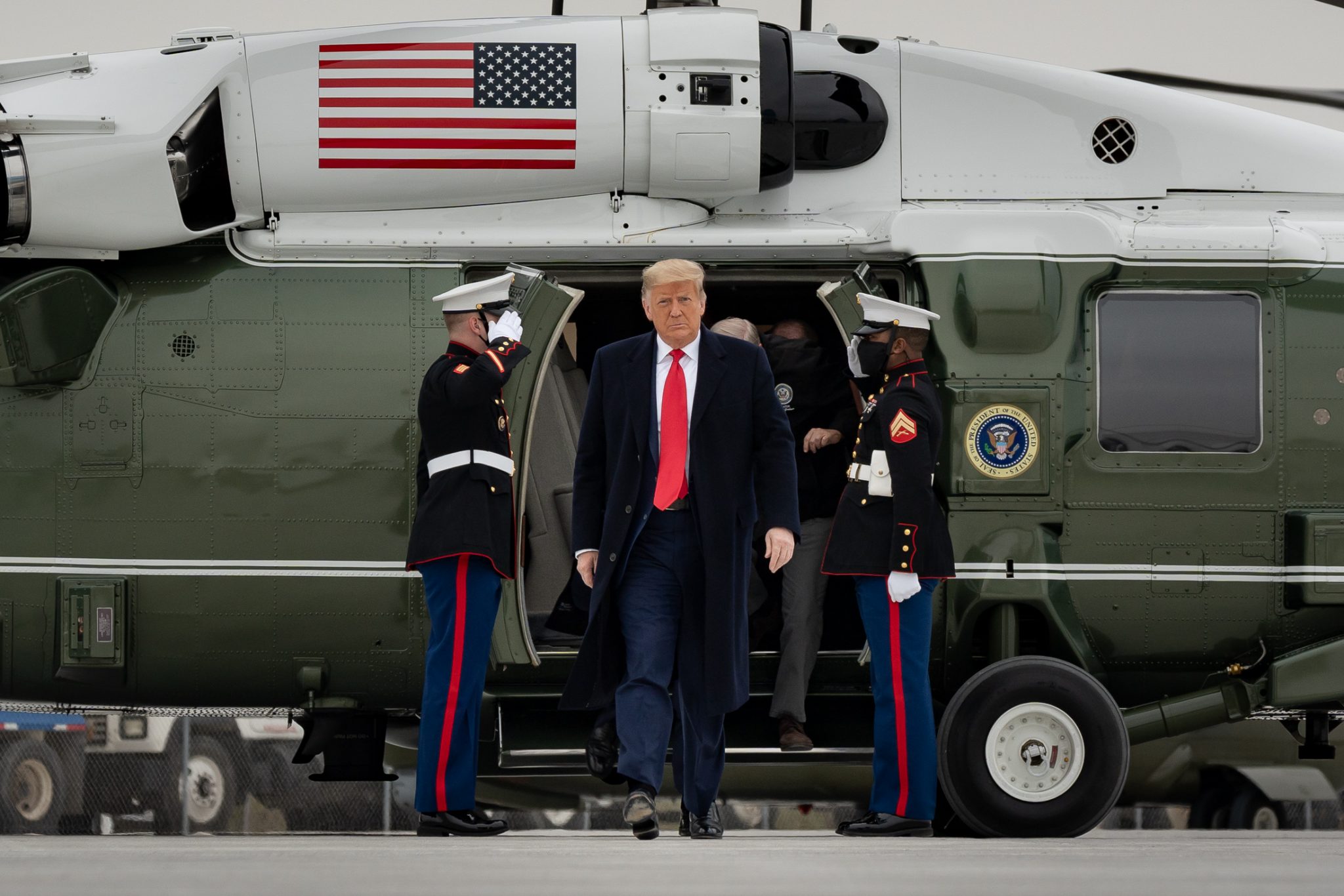 If President Trump has accomplished nothing else — and he most assuredly has accomplished a great deal — one of his lasting contributions will be pulling the mask off the Washington Establishment and the media. (But I repeat myself.)

My good friend Bob Tyrrell, the founder of this magazine and as great a champion of freedom and conservatism as there has ever been, has parted company with the president.

I stand with Trump.

Much has been made of the president’s speech on January 6. The frequent allegation is that it was “reckless” and that it “incited” the rioters who assaulted the Capitol. Since I was not only present at that speech on the Ellipse behind the White House, but was given a literal front-row seat mere feet from the president’s bullet-proof, glass-encased podium, I must disagree.

There was nothing in the least reckless that was said. The president believes this election was stolen. I emphatically agree. He went through chapter and verse of why he believes this, thoroughly documenting his belief. Then he said this:

I know that everyone here will soon be marching over to the Capitol building to peacefully and patriotically make your voices heard.

That is decidedly not a call to riot. In fact, before the president had even shown up I was informed by someone with no White House connections that many in the crowd were going to march up Pennsylvania Avenue to protest at the Capitol. Doubtless word of this reached the president, which is why he said, “I know that everyone here will soon be marching over to the Capitol building.”

I was unable to go to the Capitol as I had media requests for television and radio interviews and thus had to return to my hotel. But quite clearly 99.9 percent of the crowd of thousands was peaceful. My own videos of the White House rally are filled with rock music and a crowd dancing to music — a crowd of families, men, women and children, all races and a gay group as well.

Let me be crystal clear. There is nothing unusual about believing and saying that this election was stolen. As a Pennsylvanian, I know all too well that my home state has a terrible record on this front. As this is written, a Philadelphia Democrat Judge of Elections is under indictment for rigging voting machines in three — say again three! — past elections. He has admitted to his crime, and admits that he was paid to do it — which has now resulted in the indictment of the man who paid him. That would be former Democratic United States Congressman Michael “Ozzie” Myers of Philadelphia.

Not to mention that in 2012 the Philadelphia Inquirer reported that in 59 of Philadelphia’s voting districts President Obama received over 19,000 votes — and GOP nominee Mitt Romney got … zero votes. That would be a statistical impossibility without voter fraud.

As I have noted earlier in this space, eight Pennsylvania Republican congressmen and 21 Republican State Senators sent letters to Congress detailing the specifics of what they believed was wrong in the Pennsylvania election. And in the case of the congressman, they spelled out in detail exactly why they would not be voting to certify the election. That is hardly reckless. It is supporting the integrity of the American election system and, most importantly, standing up for the Constitution.

But what is decidedly reckless has been the conduct of the Washington Establishment. Even a good and decent man like former Attorney General Jeff Sessions made the critical mistake of not telling President Trump that if appointed he would go along with the appointment of a Special Counsel. Instead he took the job without telling the president this, then recused himself from the entire business, which enabled the Establishment to get Establishment favorite Robert Mueller in the job. This in turn resulted in a three-year witch hunt that produced nothing. There was no Trump–Russia collusion. That alone was a serious Washington Establishment scandal.

Now there has been an ostentatious flood of Trump appointees loudly exiting the administration in a remarkable if unsurprising display of disloyalty. Rush Limbaugh took note of this and put his finger exactly on the reason for it:

Rush is exactly right. If you want any kind of a job in Washington, you must play ball with the Establishment. And in this instance it means if you took a job in the Trump administration, you need right now to say you made a mistake, you are sorry, and leave. Otherwise you’ll never work in this town again. There’s nothing more to these ostentatious resignations than that.

And as for the Democrats? There is a cartoon floating around out there that catches the problem. There is President Obama: “They bring a knife, we bring a gun.” Joe Biden: “I wanna take Trump behind the gym and beat the hell out of him.” Eric Holder: “When they go low we kick ’em.” And there’s Kamala Harris, bailing out rioters. The president is pictured saying exactly what he said at the rally: “Peacefully and patriotically let your voices be heard.” And it ends with Nancy Pelosi angrily pointing her finger at Trump and shrieking: “Impeach!”

The Democratic Party has disgraced itself with its behavior. In 2020, Democrats repeatedly egged on violence in one city after another. Only this week California Congresswoman Maxine Waters has vowed to “take Trump out.” Then there was Waters’ call to physically confront members of the Trump administration, saying this:

If you see anybody from that cabinet in a restaurant, in a department store, at a gasoline station, you get out and you create a crowd, and you push back on them, and you tell them they’re not welcome anymore, anywhere.

Will her colleagues hold her responsible? Will she be censured? Of course not. Because threats of violence for the favorite leftist cause are always acceptable.

Politically speaking Democrats should never have a moment’s peace in the next four years. Here’s a thought experiment: If Donald Trump raised bail money for some of the Capitol rioters, imagine the reaction.

In fact, Kamala Harris did just that. The text of her tweet is this: “If you’re able to, chip in now to the @MNFreedomFund to help post bail for those protesting on the ground in Minnesota.” She notoriously appeared on Stephen Colbert’s show and said of the rioters violently trashing and burning a number of American cities:

Now that would be incitement to violence. This is decidedly impeachment-worthy. Liz Cheney, where are you? GOP House members and senators who think Trump has committed an impeachable offense, where are you?

So too has the mainstream media been complicit in this violence. For four years they have lied repeatedly about the president, frequently slipping into a nonsensical, foaming hysteria. If the topic is inciting to riot, CNN, MSNBC, the New York Times, the Washington Post, and others are lucky they are protected by the First Amendment or they would be candidates for the hoosegow. The media was decidedly complicit in this violence. It is they who have incited insurrection.

President Trump has been a great president. His accomplishments will, thankfully, be lasting. From the economy to judicial appointments to the Middle East, they are major-league significant. One hundred years from now, historians will treat him well. When President Harry Truman left office, his popularity was in the tank at 35 percent. When he died 20 years later, historians were ranking him as one of America’s great presidents, a standing he holds today.

Most importantly, as I have long since learned, Donald Trump is a good and decent man. He is a great patriot and a great president. What has been done to President Trump is, to borrow from Justice Clarence Thomas, a high-tech/big-media lynching of an uppity outsider who was a threat to the way the Washington Establishment does business.

And it is very safe to say that this will backfire. Why? Because, as the president himself has said to his supporters:

In reality they’re not after me. They’re after you. I’m just in the way.

As always, he was right. And his supporters know it. Rest assured they will remember what was done to the president — and to them.