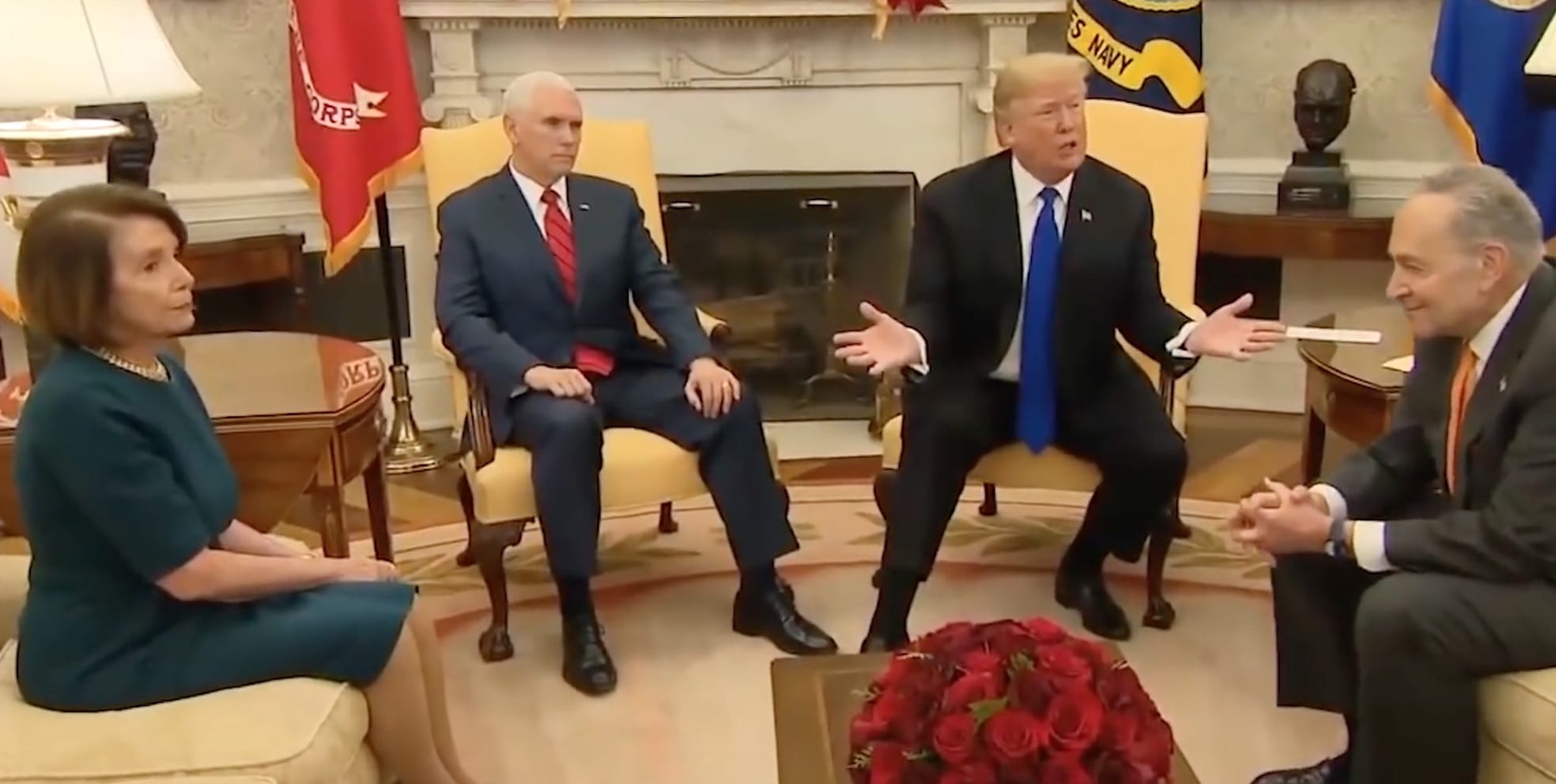 The Tuesday showdown between President Trump and Senate Minority Leader Chuck Schumer (D-NY) and incoming House Speaker Nancy Pelosi (D-Cal) was not supposed to be a press event but Trump, ever the stage manager, made sure it was. He turned it into a good political scrap.

At the meeting voices were raised, fingers were pointed and — according to the Washington Post — Chuck and Nancy showed that Trump was “malleable” — i.e., unserious — about building the border wall between the U.S. and Mexico.

But Trump said then that he’s willing to force a showdown in the form of a government shutdown over funding for the wall. He said, “I am proud to shut down the government for border security. I will take the mantle. I will be the one to shut it down.”

The Democrats and the media (please pardon the redundancy) treat government shutdowns as something akin to the apocalypse. The Dems always insist that it’s the Republicans’ fault, the media play along, and the Republicans usually don’t say anything that bulls through all the media/Dem manure.

We know — because it’s the law, and because of our experience with them — that government shutdowns don’t put the Army, Navy, Air Force, Marines and Coast Guard on leave. The Border Patrol and customs agencies aren’t laid off. And TSA doesn’t stop screening airport passengers.

And, before we shed a tear about the lost wages of all those government employees, let’s remember that the first thing Congress does when a shutdown ends is pass a special appropriation bill that gives them back pay for the lost time. It’s nothing more than a forced — and paid — vacation.

Government shutdowns are games of political chicken to determine who caves in first, Congress or the White House.

Sometimes they are wasted and produce no useful political product. Such was the January 2018 shutdown over the Obama “Deferred Action on Childhood Arrivals” — DACA — program. It lasted three days, the White House caved in, and nothing was accomplished.

On the other hand, government shutdowns that are done at the right time and for the right reason can be highly productive.

Remember the last big shutdown? In 2013, Sen. Ted Cruz (R-Tx) provoked a sixteen-day shutdown with his twenty-one hour filibuster trying to block funding of Obamacare. Cruz and the Republicans were bashed roundly and soundly in the media. The Democrats raised hell about it until the election the following year.

And in the 2014 midterm elections, American voters showed how angry at Republicans they were by giving them control of the Senate for the first time in a decade. They needed six seats to take over. They won eight.

Cruz’s filibuster wasn’t the precipitating cause of the Senate takeover, but it helped. And the 2018 short shutdown wasn’t the cause of the big Dem win in November. In both cases, the results were more a product of presidential unpopularity — and disgust at congressional inaction — than anything else.

Which makes a shutdown over Christmas a very attractive prospect.

The entire Democratic Party is in a very bad place on border security. Their position is the most radical — open borders and no border fence — and is not just at odds with Trump’s base but also with the majority of American voters. If the president, the conservative media, and enough Republicans in the congressional and gubernatorial ranks play it right, they will be big winners, not sinners.

People — at least those who haven’t tuned out politics entirely — are properly disgusted with congressional inaction on immigration and border security. But they have imposed a divided government on us for the next two years, which means that nothing will be done on immigration for at least that time.

But that doesn’t mean the American voters don’t expect something to be done about the problem of people setting a toe in U.S. territory and claiming asylum. They see the flood of illegal immigrants coming over and around the partially-built fence. And, especially in the border states, they are suffering directly from the nearly-unrestricted flow of immigrants into the U.S.

People don’t yet understand that Trump has no other option than a government shutdown so he has to explain it repeatedly. The border wall is the only way to get the immigration mess under some semblance of control, especially since the Dems will block any effort at reforming the immigration and asylum laws for the next two years.

Trump has already been too reasonable and willing to compromise. The cost of the wall will be around $25 billion but Trump is seeking only $5 billion now and has agreed to seek the rest in increments, which means he’ll have this fight again and again. He can’t afford to lose a single round.

The president needs to force the shutdown and bring every gun to bear on the border wall issue.

He can raise hell on Twitter every day the government is shut down but he needs to do more.

The day of the shutdown — it will inevitably be called the “Christmas Shutdown” — should be the day he delivers an Oval Office speech to the American people. He should blame Schumer and Pelosi personally, making them the issue. Neither is popular except in the East and West Coast regions from which they came.

The speech should include many of the names of Americans — such as Kate Steinle, the young woman gunned down by an illegal alien in San Francisco — who have died because the illegal immigration problem hasn’t been solved. And Trump should hammer the Dems about that, just as he did in the 2016 campaign.

After that, he — and as many Republican governors, senators, and congressmen he can corral — should be on television blasting Schumer and Pelosi for closing down the government instead of appropriating the funds to build the wall.

This won’t be a three-day shutdown. It could go on for a month or more. So be it.

Trump has chased down too many rabbit holes looking for wall funding. Mexico isn’t paying for the wall by agreeing to the new U.S.-Mexico-Canada trade agreement. The new Mexican president, Lopez Obrador, isn’t going to do anything his predecessors didn’t do to help. Which is nothing at all.

The Pentagon can’t fund and build the wall without congressional reprogramming of money to do that, which isn’t going to happen.

All that’s left is shutting down the government to force the Dems to fund the wall. Let’s get on with it.