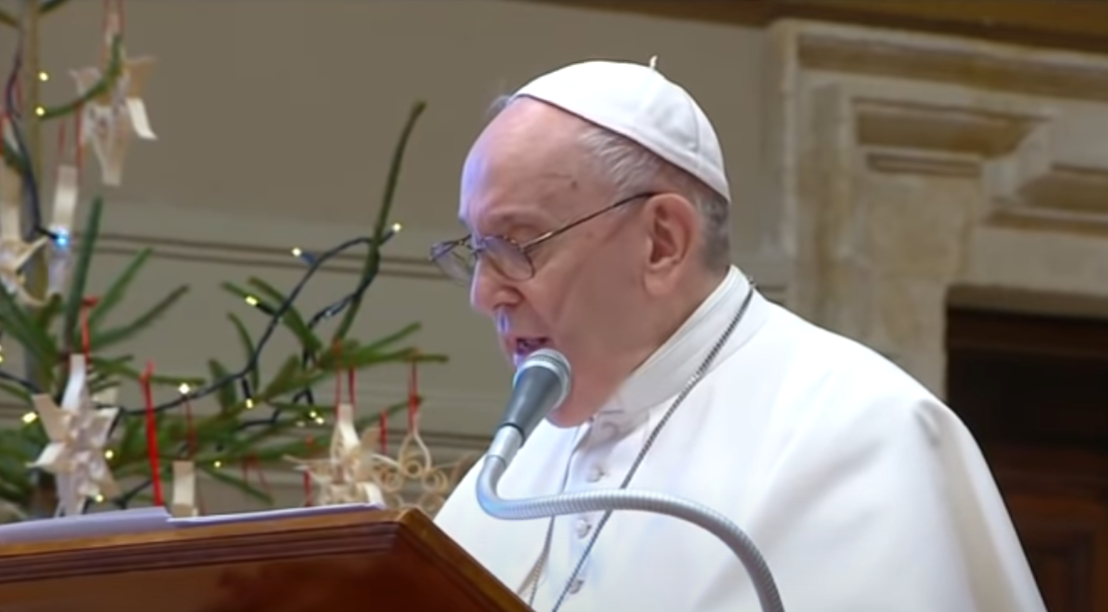 Shortly before Christmas, Pope Francis delivered a speech to Vatican officials in which he decried “conflict” within the Church. It was an odd theme for a pope who routinely sows such conflict. Naturally, he didn’t mention his own role in fostering division. Instead, he appeared to equate “conflict” with resistance to his subversive agenda.

When the Church is viewed in terms of conflict — right versus left, progressive versus traditionalist — she becomes fragmented and polarized, distorting and betraying her true nature. She is, on the other hand, a body in continual crisis, precisely because she is alive. She must never become a body in conflict, with winners and losers, for in this way she would spread apprehension, become more rigid and less synodal, and impose a uniformity far removed from the richness and plurality that the Spirit has bestowed on his Church.

In other words, stop opposing my changes to Church teaching and practice. What he diagnoses as unhealthy is in fact a commendable opposition by the faithful to his dismaying and divisive pontificate. The Church would grow weaker, not stronger, if that opposition disappeared.

To the extent that the Church is “betraying her true nature,” that is due to the pope’s own flirtations with heterodoxy and his reduction of Catholic teaching to left-wing politics. His pontificate has been defined not by shoring up the sources of unity — doctrine and tradition — but by chipping away at them, all the while taking positions on contentious political matters on which Catholics can reasonably disagree. That is what has largely created an atmosphere of “right versus left, progressive versus traditionalist” in the Church.

The pope also used the speech to reflect on “crisis” in the Church, remarks notable only for their complacency. He made no mention of the many capitulations this year by churchmen to an overweening state that treated the Church as “nonessential.” It is hard to imagine any of his predecessors submitting so docilely to the whims of secularist central planners.

That churchmen failed the coronavirus crisis goes unmentioned in the speech. Instead, they are told to view crisis as no big deal: “If a certain realism leads us to see our recent history only as a series of mishaps, scandals and failings, sins and contradictions, short-circuits and setbacks in our witness, we should not fear.” He breezily suggested that they be “open to crisis” and view it as a “journey.”

“If we really desire renewal, though, we must have the courage to be completely open,” he said. Catholics have heard this prattle for years, only to see their religion decline under a cowardly episcopate “open” to the destructive spirit of the age.

In a classic moment of inveighing against divisiveness while displaying it, the pope, near the conclusion of the speech, made a glowing and gratuitous reference to a “saintly Brazilian bishop” who “used to say: ‘When I am concerned for the poor, they call me a saint; but when I keep asking why such great poverty exists, they call me a communist.’” The pope was referring to Dom Hélder Câmara, a Brazilian archbishop who served as the head of the archdiocese of Olinda and Recife from 1964–85.

Camara was known for his very open and strident socialism. He once said, “My socialism is special, it’s a socialism that respects the human person and goes back to the Gospels. My socialism it is justice.” Camara even defended armed socialist struggle, saying, “I respect a lot priests with rifles on their shoulders.”

Nicknamed the “red” bishop, Camara played a significant role in spreading “liberation theology” throughout South America. In many ways, he was a precursor to Pope Francis, calling on the Church to liberalize, both politically and theologically.

The kind of “conflict” Camara represents doesn’t bother the pope. Far from it. The pope is considering canonizing him. “An iconic figure in Latin American Catholicism and a source of inspiration for Pope Francis is one step closer to sainthood, as the diocesan phase of a canonization process for the late Archbishop Hélder Câmara of Brazil closed on Dec. 19,” reported Crux last year.

That Camara is up for canonization sheds more light on the true state of the Church than any end-of-the-year musings by the pope. It illustrates the very politicization of the faith that has made division under this pope inevitable.