Free the Market,Top Story Jimmy Carter,Rent Control,Richard Nixon,Ronald Reagan Politicians Are Addicted to Price Controls - The American Spectator | USA News and Politics
Menu
Free the Market
Politicians Are Addicted to Price Controls
Shortsightedness is their thing, and rehab is never in the cards, until a Reagan comes along.
by Veronique de Rugy
Wikimedia Commons 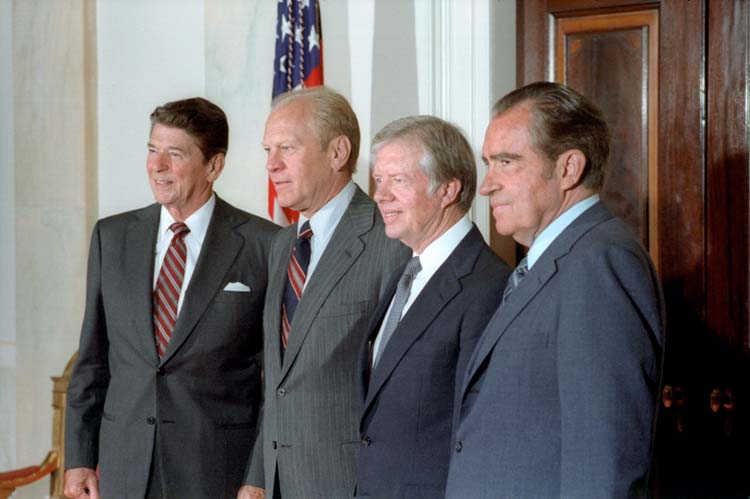 Despite overwhelming historical evidence demonstrating the folly of government-imposed price controls, modern politicians just can’t seem to quit inflicting them on us. One obvious example involves health care, where price controls on prescription medications always seem to be just around the corner and are now being considered in the rush to eliminate surprise medical bills. Fewer people know about similar efforts regarding the aluminum market, where some politicians are contemplating price controls to compensate victims of the trade war.

Back in March 2018, President Donald Trump announced that he would impose a 10-percent tariff on all imported aluminum (unless an exemption was later granted by the Department of Commerce).

Tariffs have increased the price of aluminum at great expense to the metal consumers, and their complaints haven’t fallen on deaf ears. Unfortunately, well-meaning politicians have chosen the wrong path. Instead of fighting the president and demanding an end to the tariffs, they have devised a scheme meant to control the price of aluminum.

The Aluminum Pricing Examination Act targets firms that report on domestic aluminum market transactions. The firms in question merely provide information that benefits both buyers and sellers. But politicians are threatening to bring these firms’ functions under control of the Commodity Futures Trading Commission to satisfy aluminum users who are unhappy with the current trajectory of prices.

It’s understandable that beer brewers and others demanding intervention from elected officials aren’t pleased with rising aluminum prices. But prices reflect underlying market realities that can’t be changed simply by bringing political pressure to bear on those who monitor and report on them. It may come as a surprise to politicians, but removing power to your fire alarms won’t prevent fires.

This is a common political mistake, as price controls have existed for nearly as long as governments. The Code of Hammurabi, for instance, included a list of mandated prices for many types of labor and services circa 1754 B.C. Other historical examples can be found in ancient Egypt, Greece, and China, each providing ample evidence for the folly of government restrictions on price movements.

But for those elected officials not up on their ancient economic history, there’s no shortage of modern cases from which to learn.

President Richard Nixon thought he could fight inflation with a 90-day freeze on wages and prices, promising “action that will break the vicious circle of spiraling prices and costs.” After the freeze, increases would need the approval of either a “Pay Board” or “Price Commission.” Today, this sounds crazy, but Nixon wasn’t on an island. Markets rallied following his announcement, and the press ate it up.

The result was absolutely disastrous. Inflation — which, at just over 4 percent annually in 1971, wasn’t unreasonably high — shot up into the double digits by the time the controls were lifted.

Nixon’s controls on gasoline persisted through the Carter administration. Domestic exploration and production declined sharply, leading to an influx of foreign oil and long lines at the pumps that many still remember. When President Ronald Reagan finally ended the controls as one of his very first official acts as president, the gas lines immediately ended and gas prices soon plummeted.

Some price controls are ongoing. Rent control has devastated housing markets, particularly in New York and California, by distorting supply and demand. A few lucky individuals make out well, but studies consistently show that almost everyone else — especially would-be renters — will suffer because there’s less incentive to build new housing.

Why do price controls always produce the same result? It’s not complicated, really. Prices give us incentives to produce and consume goods in economically sustainable ways. They convey information.

High prices, for example, signal where more of a particular good is needed. We see this most clearly following natural disasters or other unexpected shocks, which is why anti-price-gouging regulations are counterproductive.

Providing false signals through mandates for artificially low or high prices results in poor market performance. As Nobel Prize-winning economist Milton Friedman best explained, “Economists may not know much. But we know one thing very well: how to produce surpluses and shortages. Do you want a surplus? Have the government legislate a minimum price that is above the price that would otherwise prevail.… Do you want a shortage? Have the government legislate a maximum price that is below the price that would otherwise prevail.”

If he’s right that economists don’t know much, then politicians must know even less.