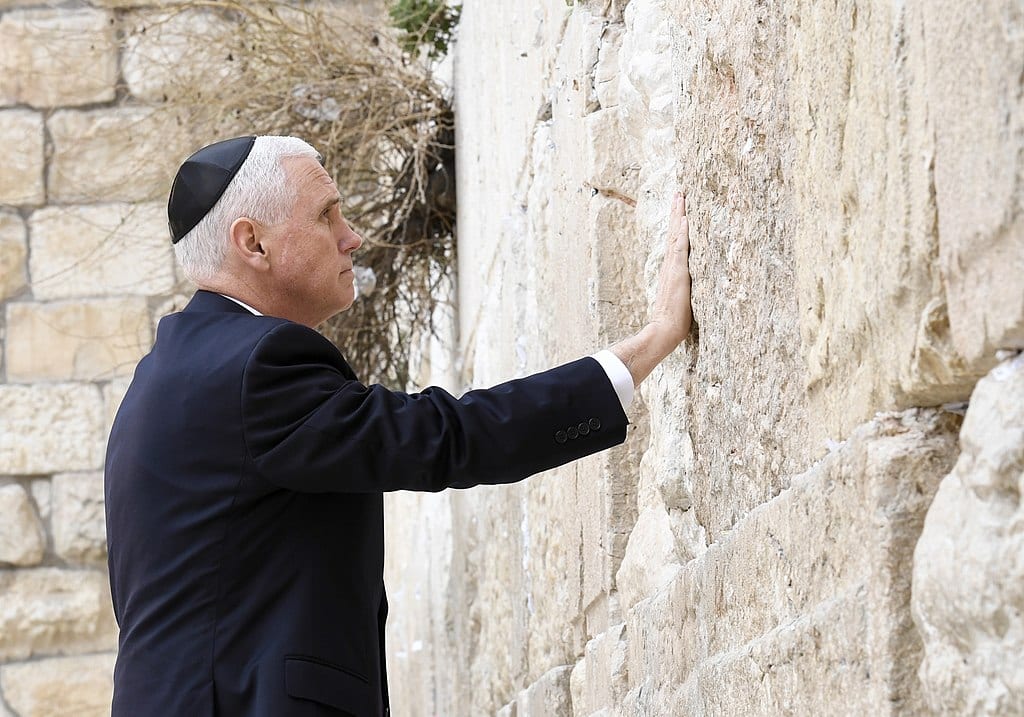 Vice President Mike Pence pulled off a truly remarkable feat last week. He connected with the ancient city of Jerusalem, the modern State of Israel, and the soul of the Jewish people. And he did so at a spiritual level rarely available to politicians and diplomats.

He drove the connection deeper. The man who had declared, on the campaign trail, “I’m a Christian, a conservative, and a Republican — in that order,” arrived in the Jewish state well aware that the history of Christian-Jewish relations has been far from harmonious. But Pence brought with him the love of a modern philosemitic Evangelical theology, a Christianity that sees the modern State of Israel as the fulfillment of biblical prophecy. In that spirit, he joyfully quoted Deuteronomy: “even if you have been banished to the most distant land under the heavens, from there He would gather and bring you back to the land which your fathers possessed.”

Any reference to G-d or scripture, of course, drives the Western intelligentsia mad. The leading lights of Jewish leftism are among the maddest. Israel’s leftist daily Haaretz was reduced to contemptuous anti-religious slander, trotting out a hateful canard no less odious than racist or anti-Semitic libel: “[I]n the evangelical Christian worldview, the return of the Jewish people to its promised land is necessary to expedite Judgment Day and the return of Jesus. So if the infidels, who, what can you do, includes Jews, do not accept the yoke of his kingdom, the end will be less than heartwarming.” Not to be outdone, the New York-based (formerly Jewish Daily) Forward declared “Mike Pence’s love of Israel is dangerous for Jews,” derisively calling his visit a “fiasco,” in which, “like a good Jewish tourist, he visited the Western Wall, Yad Vashem and the Knesset.”

Blind hatred is painful to watch. Sadly, Jews uncomfortable with their own place as part of the Jewish people have long hurled such invectives at any gentile who would embrace the Jews willingly. To them, Judaism is too heavy a cross to bear. A Christian whose joy in his own faith is intertwined with Judaism strikes them as daft — and thus necessarily dangerous. Pence has undoubtedly heard such slanders before, and much as they likely pain him, he has not let them dim his admiration for the children of Israel.

In fact, Pence paid the Jewish people the greatest compliment an American official can confer. Speaking from a deep faith that G-d does indeed shed His Grace upon the United States, Pence depicted Americans and the Jews as sister peoples. He spoke of America’s providential covenant of freedom and G-d’s covenant with Israel — a parallel explicit in the Hebrew name for the U.S., Artzot HaBrit: “The Lands of the Covenant.”

Pence embraced the Jews as a people with a strong sense of the future, and an even stronger sense of the past. Israel’s national anthem, “HaTikvah,” means “The Hope.” Its opening lines speak of heart and soul. It ends: “Still our Hope has not been lost / The Hope of 2000 years / To be a free nation in our Land / The Land of Zion, Jerusalem.” The left, including the Jewish left, might value hope tempered with change. But the traditional Jewish hope is a hope of persistence, a hope of patience, a hope of steadfastness, a hope rooted in faith — in the belief that G-d keeps His promises. Mike Pence, Christian pilgrim to the Holy Land, Vice President of the United States, spoke to Israel — and to the Jewish people — as a man who shares that hope and faith.

Jews who love Judaism and Israel return Pence’s embrace in kind. According to a beloved gem of ancient rabbinic wisdom, “Words that emanate from the heart penetrate the heart.” The Vice President’s words “from the heart of the American people” did indeed enter the hearts of Jews in Israel and around the world.

Jews and Christians share many foundational texts and beliefs, including G-d’s promise to Abraham “I will bless those who bless you, and whoever curses you I will curse.” President Trump and Vice President Pence have blessed the Jewish people with their warmth, with their strength, and with their clarity in differentiating good from evil. And, as we will hear this week in a State of the Union also delivered from the heart, G-d had blessed the United States with the extraordinary leadership of Donald Trump and Mike Pence — leadership that is indeed Making America Great Again.

Bruce Abramson is vice president and director of policy at the Iron Dome Alliance, and a senior fellow at the London Center for Policy Research. Jeff Ballabon is CEO of B2 Strategic and an adviser to Donald J. Trump for President, Inc.