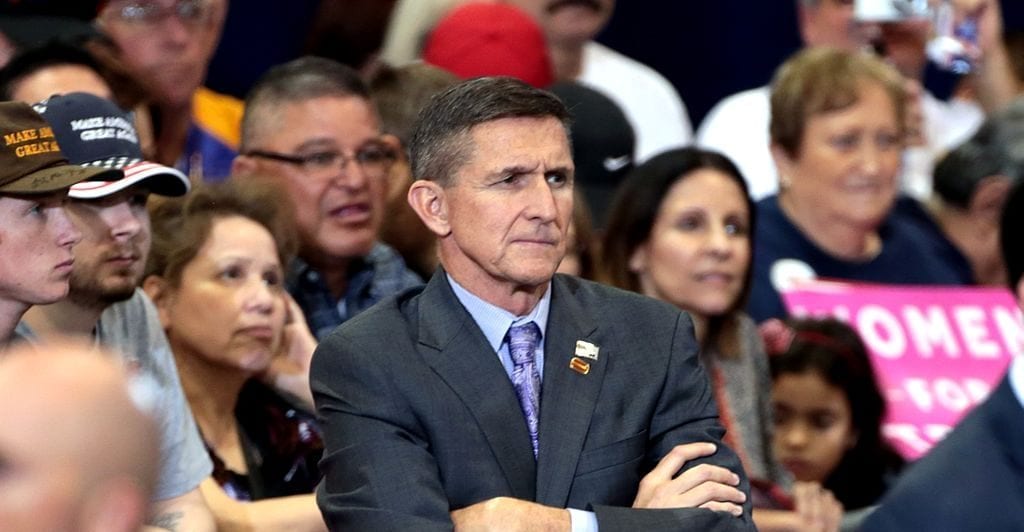 The headline in the Hill read this way:

FBI official discussed trying to get Flynn to lie in interview, ‘get him fired,’ notes show

The story, as reported by John Bowden, says this:

A handwritten note penned by an FBI official involved in the investigation into alleged ties between President Trump‘s campaign and Russia discussed the possibility of getting former national security adviser Michael Flynn fired, or forcing him to lie during his interrogation.

The newly unsealed note details the strategy against Flynn in his meetings during the early days of the investigation with agents whom he has accused of tricking him into lying about his foreign dealings.

“What’s our goal? Truth/Admission or to get him to lie, so we can prosecute him or get him fired?” reads the note, written by the FBI’s then-director of counterintelligence. “If we get him to admit to breaking the Logan Act, give facts to DOJ & have them decide. Or, if he initially lies, then we present him [redacted] & he admits it, document for DOJ, & let them decide how to address it.”

Got that? Right there, literally in black and white, is hardcore proof that the Trump-hating elites of the Federal Bureau of Investigation — an organization that was run by Trump-haters Director James Comey and Deputy Director Andrew McCabe — was plotting and planning to set up a 33-year veteran of the U.S. military with a fake “crime.”

Say again, the notes say that the FBI was asking:=,

What’s our goal? Truth/Admission or to get him to lie … ?

This is known as a perjury trap. An unbelievable abuse of power. It’s crooked as all get out. And two things should happen immediately.

This is egregious and unacceptable behavior. I believe @realDonaldTrump should pardon Gen. Flynn. FBI official discussed trying to get Flynn to lie in interview, “get him fired,” notes show.

Michael Flynn is the victim of one of the worst miscarriages of justice in modern times — an innocent man who was unfairly targeted by the FBI, wrongfully prosecuted by special counsel Robert Mueller, and coerced into a guilty plea under threat.

Sen. Paul and Gregg Jarrett are exactly right. And thankfully, the president appears to be considering just that, as seen in this news report from the Associated Press:

WASHINGTON (AP) — President Donald Trump on Thursday voiced strong support for his former national security adviser Michael Flynn, raising speculation that a pardon may be coming after Flynn’s lawyers disclosed internal FBI documents they claim show the FBI was trying to entrap him.

Trump has long said he is considering pardoning Flynn, who pleaded guilty to lying to the FBI in early 2017 about his conversations with the Russian ambassador to the United States. The president spent Wednesday night and Thursday morning retweeting supportive statements and a video Flynn tweeted of an American flag flapping in the wind.

The president also said this:

They came at him with 15 buses and he’s standing in the middle of the highway. What they did to this man. They tormented him. They destroyed him. But he’s going to come back.

Then there is Part Two of this disgraceful episode. That would be holding those responsible for this deliberate, willful miscarriage of justice responsible. Here is Gregg Jarrett again:

New court documents finally handed over to Flynn’s lawyer contain exculpatory evidence that has been long sought, yet concealed until now. The charge against him should be dismissed. Then, he should sue the very people and government that persecuted him under the pretext of a legitimate prosecution.

The unvarnished truth is that the retired Army lieutenant general and former National Security Adviser never did anything wrong and committed no crimes. He was set up by unscrupulous FBI officials, then relentlessly pursued by Mueller’s team of overzealous prosecutors who were desperate to show that President Trump and his campaign colluded with Russia to win the 2016 presidential election.

In January, Attorney General William Barr appointed Jeffrey Jensen, the U.S. Attorney for the Eastern District of Missouri, to do a detailed review of this situation. In the doing, Jensen has discovered the notes in question.

Michael Flynn attorney responds to explosive documents: ‘I can’t even tell you how outraged I am’

“It’s just absolutely appalling what these agents, and then special counsel operatives, did to General Flynn,” Powell said. “It’s abuse of their authority at every turn.” …

“I interpret the notes as absolutely damning of their conduct and their plan,” Powell said. “They rejected the advice of the apparent lawyer who wrote on the handwritten note that they not play games with the White House and instead that is exactly what they did.” …

The bombshell documents are “devastating evidence of the lengths they were willing to go to disregard all protocols, all prior rules,” said Powell.

“Their standard practice in other cases [is] to warn of a [Section] 1001 violation [for making false statements to federal investigators]. None of that applied to General Flynn. They had only special violations, of every protocol known for him because they were determined to take him out.” …

“They usually show the evidence to the people when they’re talking to them about it,” Powell said, “but no — General Flynn, they blindsided completely at every turn. They schemed and planned ahead of the meeting to keep him relaxed and unguarded so that he would not even know he was the subject of the interview.”

“I can’t even tell you how outraged I am by all of this,” she added.…

By Thursday afternoon, even more information that was made public. Here is the Fox headline:

This new bombshell says this:

Internal FBI documents unsealed Thursday indicate that Peter Strzok — the now-disgraced anti-Trump former head of FBI counterintelligence — ordered the investigation of former national security adviser Michael Flynn to remain open even after it was slated to be closed due to a lack of so-called “derogatory” information.

Does it really need to be said that this behavior from the FBI was and is absolutely unacceptable? This is nothing less than a return to the days when the all-powerful FBI Director J. Edgar Hoover got into the habit of blackmailing presidents and political opponents of the day with quiet investigations into their private behavior.

In the aftermath of the FBI’s Hoover-era scandals, in 1973 President Richard Nixon appointed one-time FBI agent and by then Kansas City Police Chief Clarence Kelley as the new FBI director. A handful of months after taking the reins of the Bureau and unearthing the scope and depth of its problems, Kelley sent a memo to all of the almost 10,000 FBI agents, in which he quite specifically said they were never again to engage in “investigative activity that could abridge in any way the rights guaranteed citizens by the Constitution.”

That abridging of constitutional rights is exactly what the FBI’s dirty cops of the Comey era have been doing to Gen. Mike Flynn.

The president should pardon Gen. Flynn — and Attorney General Barr should continue his investigation. And prosecute every last FBI official whose fingerprints touched this outrageous abuse of power.