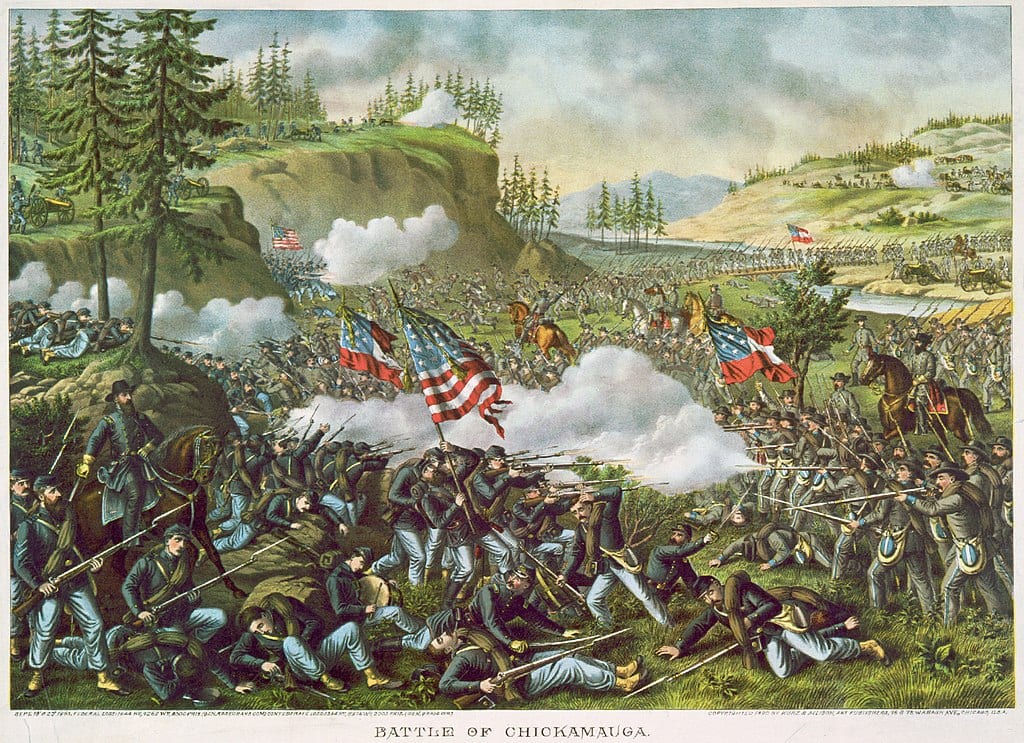 One of my ancestors knew Abraham Lincoln. All right, that’s not strictly true. He was a collateral ancestor of mine, half-brother to my great-great-grandfather. An early Norwegian settler in Illinois, he was active in the Republican Party. His obituary called him a “friend of Abraham Lincoln.” I take that to mean he was acquainted with Lincoln through party business.

But this story isn’t about him. There was nothing remarkable in an Illinois Norwegian being a Republican. You’d have had to search pretty hard to find one who wasn’t in those days. Antislavery feeling ran high among them, and they were eager volunteers for the Union Army when the war broke out.

On June 23 of this year, “civil rights” rioters in Madison, Wisconsin, tore down Col. Heg’s statue in front of the state capitol, cut its head off, and dumped it into Lake Monona.

Illinois and Wisconsin were the original cradles of Norwegian-American settlement. Wisconsin Norwegians, inspired by a group of German immigrants who’d raised their own ethnic regiment, followed suit in 1862 by organizing the 15th Wisconsin Volunteer Regiment, mostly composed of Norwegian-born citizens. As their commander they chose Hans Christian Heg, a native of Lier, Buskerud, Norway who had immigrated with his parents in 1840. Heg spent some of his youth in the California gold fields but returned to his home state. He joined the antislavery Free State Party and later the Republicans. He became the first Norwegian elected to statewide office in Wisconsin, and was eventually appointed state commissioner of prisons.

An ardent abolitionist, Heg joined a group called the “Wide-Awakes,” an association of young Republicans who marched in parades and provided “political police” to protect Republican candidates at public events. One could, I suppose, compare them to today’s Antifa, except that they were generally nonviolent, did not indulge in destruction of property, and did not hate their own country. It’s true the Wide-Awakes were involved in a riot at one point, in 1860 in Stone’s Prairie, Illinois, but that was mostly a matter of fisticuffs with Democrat groups. Shots were fired, but those came from the Democrats as the Wide-Awakes were leaving. Heg himself violated his constitutional obligations when he sheltered Sherman Booth, a Wisconsin journalist who had been convicted of instigating the liberation of a fugitive slave and had been sprung from jail by his supporters.

Heg became the colonel of the new 15th Wisconsin Regiment. They saw action in 27 major battles in the Civil War, losing 38 percent of their original strength. Forty-nine of their members would perish in the Andersonville prison camp. Col. Heg’s own day came during the Battle of Chickamauga, September 20, 1863. He was 33 years old, and left behind a beloved wife, Gunhild.

On June 23 of this year, “civil rights” rioters in Madison, Wisconsin, tore down Col. Heg’s statue in front of the state capitol, cut its head off, and dumped it into Lake Monona.

Norwegians in the Upper Midwest today tend to be Democrats, not Republicans. This is less paradoxical than it appears. We sometimes forget that the Republicans were the liberals of the 19th century. Categories break down further when we examine Scandinavian ethnic history. The old Venstre (Left) party in Norway was originally dominated by Lutheran pietists, people who gathered frequently for prayer and read their Bibles obsessively (see my articles on Hans Nielsen Hauge here and here). When they came to America, they took it for granted that liberal movements were engaged in God’s work. Many of their descendants still do.

I live in a suburb of Minneapolis, the city where the whole madness began. At the beginning, I had a lot of sympathy for the protesters. I still feel for them. I expect the black people who actually live in the burned-out neighborhoods weren’t looking for that style of urban renewal. But the neo-Khmer Rouge took over, exploiting our toxic media to divide us in a way unseen since Hans Heg was riding off to war.

There’s a Scandinavian market and gift store near the heart of the devastation. It got looted on May 27. I won’t tell you their name here; one assumes they’re good liberal members of the Evangelical Lutheran Church in America and wouldn’t appreciate a mention (even sympathetic) in The American Spectator. Still, they’ve been on Lake Street since the 1920s. Back then the neighborhood was full of people named Ole and Sven. The ethnic population has morphed multiple times over the course of a century, but that shop has stayed in place, “committed to the community.”

I’d say something about irony, but that would be cruel. And there’s been enough cruelty.

As a fantasy author, I can’t overlook Uncle Hugo’s Science Fiction Bookstore and its twin neighbor, Uncle Edgar’s Mystery Bookstore. The rioters deviated a little from their path to burn both those landmark businesses to the ground. The Uncles had been there since the 1970s, and Uncle Hugo’s was one of the original seedbeds of today’s Fandom movement.

I didn’t get to Uncle Hugo’s often, but I knew it fairly well. I participated in an authors’ book signing there once and had visited at other times. It was one of those wonderful independent stores redolent of pulp paper, where the only space not packed tight with books was packed with magazines and collectibles.

I visited it first in 1984, when I made my first professional short story sale, to Amazing Stories Magazine. I called Uncle Hugo’s and asked them to order me some extra copies for giving away (I was so green then I didn’t know you could order them at a discount from the publisher). When I went in to pick them up, the owner brought out a couple of his own for me to sign. “I can show them to people when you’re rich and famous,” he told me. He knew how to talk to an aspiring writer.

The argument of the Antifa rioters, as far as I can figure it out, is, “We know nothing of the past, except that it’s evil. And we don’t care. We will start the clock again at Year One, because at last (thank Gaia) the perfect people have appeared on Earth, the only people who will never do anything that future generations will disapprove of. We ourselves.”

Sometimes Ozymandius has the last laugh.