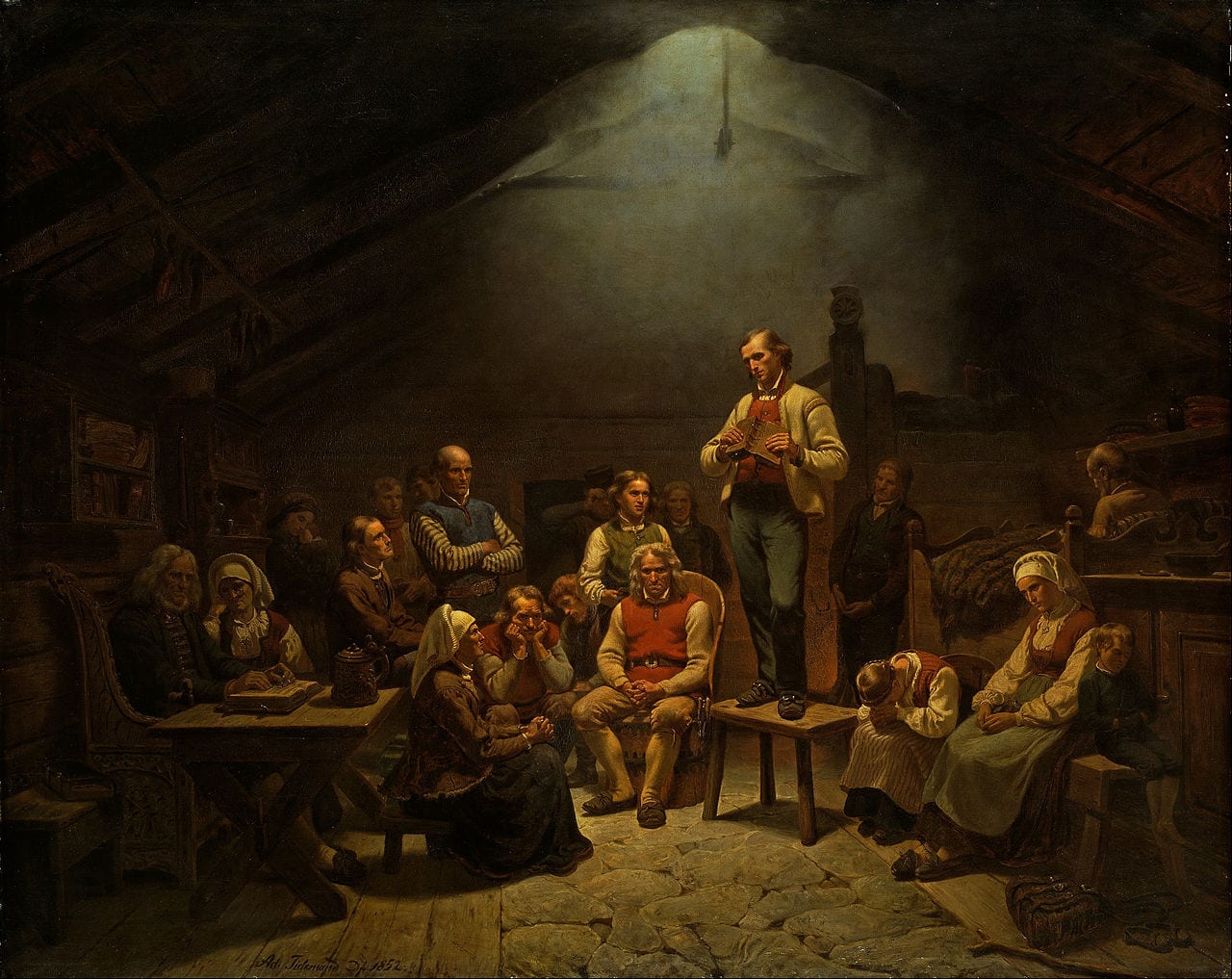 I had the chance to meet a scholar recently, a woman from Norway. I went to hear her talk about a historical figure I’ve written about on this site before — Hans Nielsen Hauge (pronounced “HOW-geh”), the early 19th-century Norwegian lay revivalist.

In conversation after the lecture, someone brought up an undocumented but well-attested story — that it was a tradition at a nearby liberal seminary for some of the students to celebrate the anniversary of Hauge’s death with a drinking party where they would make fun of him.

The speaker said this surprised her. “In Norway,” she said, “Hauge is a hero to both sides. The conservatives admire him for his religious activities. The liberals admire him for being one of the founders of their movement.”

That made my ears perk up, because this is something people unfortunate enough to know me are tired of hearing me say: the evangelical revivals of the early 19th century were one of the real roots of genuine liberalism. They were a truly revolutionary social force, undercutting the old political order in a way the French Revolution never could. The French didn’t have the imagination to do anything more creative than blaspheme, reshuffle the players in the oligarchy, and slaughter thousands. It was people like Hauge (1771–1824) who carried out genuine subversion.

Hauge ran afoul of Danish/Norwegian church laws that prohibited lay people from leading religious meetings. He spent 10 years in prison for it. From our perspective, this prohibition was an egregious violation of human rights. But from the authorities’ point of view, it made perfect sense. They recognized revolution when they saw it.

Nowadays it’s hard for Westerners to imagine the way the world worked back then, though traces remain in our language. We speak of “gentlemen” and “ladies.” We speak of someone having a “noble” character. For us, those words have (very properly) assumed behavioral and moral meanings. But originally they simply referred to classes in society. It was assumed that upper-class people were morally better than commoners. Of course a baron would keep his word, while a peasant would lie. Of course a duke would not steal, but a serf would. When aristocrats spoke of the “the best people,” they meant the best in every way.

Then along came people like Hauge. John Wesley in England is a more familiar example to Americans. Through their preaching, they brought people to an experience they felt to be life-changing. All the evidence testifies that it did change lives. The new Christian converts developed new habits. They gave up drinking and gambling. They worked hard and saved their money. Their desire to read the Bible led to increased literacy and better education. Gradually these newly prosperous commoners started writing newspapers and books. They became influential. And gradually it grew apparent to everyone that the lower classes were — in some cases — admirable. In fact, in some cases, they were more admirable than their “betters,” who (people were beginning to notice) were often idle, drunken, and lecherous.

This was deeply troubling to the establishment. They wanted the poor to be humble and obedient. That was virtue enough, thank you. When Oscar Wilde wrote, in The Importance of Being Earnest (1895), “If the lower orders don’t set us a good example, what on earth is the use of them?,” he was articulating a genuine dissonance in his society. By then the examples of the Methodists and the Salvation Army were shaming the elite pretty regularly. The aristocracy had lost their facade of moral superiority. They were beginning to realize — awkwardly — that one could well ask, What was the use of them? From such questions, revolution springs — whether bloody or peaceful.

That social revolution was just getting started in Hauge’s time. But the authorities had the sense to recognize the profound threat his activities posed.

This, I think, needs to be understood: this early (and wildly successful) form of liberalism had little to do with socialism. It had nothing to do with sexual mores. It had nothing to do with the size of government. It was about one thing: the aspiration of the poor to be full participants in society, including in government. It pitted the biblical doctrine of equality before God against time-honored social traditions. It was this kind of liberalism that formed the United States.

Ironically, those old aristocrats considered themselves benefactors and saw the Hauges of the world as ingrates. They were convinced (until proved wrong) that they really were better people. The rules limiting opportunity to the poor were there for their own good. The poor, the aristocrats believed, were like children. They’d perish without the just, wise supervision of their betters.

Today, our own elite congratulate themselves that their many programs and entitlements are all that stands between the poor and starvation. The poor, after all, are like children. They couldn’t make it in the world without help from their betters. Any proposal that calls for expecting more from them, in education or in work ethic or in family life, is denounced as hateful.

What if there were a new liberalism? A liberalism not based on condescension? A liberalism that concentrated on ennobling the poor rather than debasing society as a whole? One that raised people up through honoring them with higher expectations?

“Wishful thinking,” the elite will say.

Hauge would disagree. He knew a secret the elite don’t know. He found it in a Book.