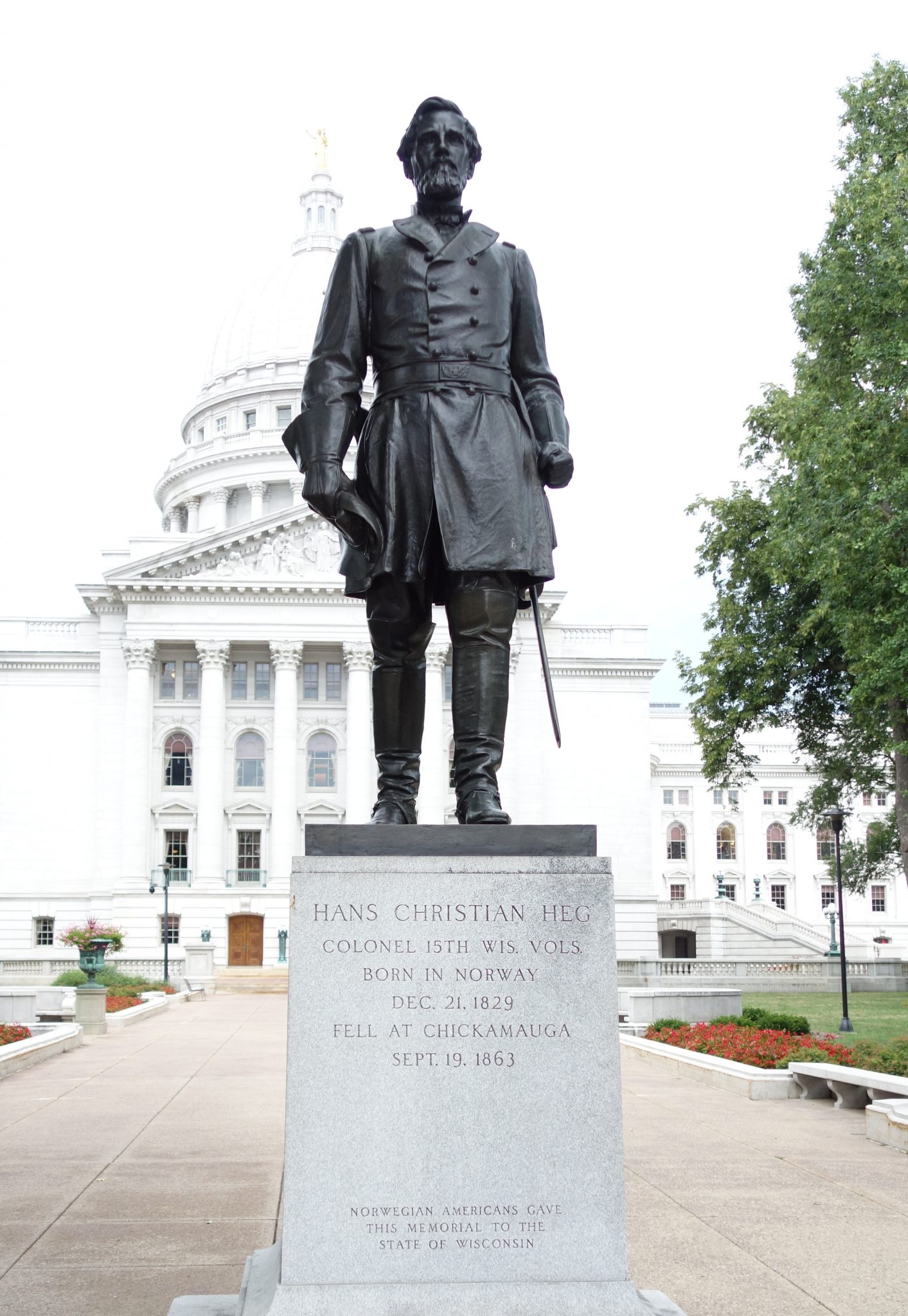 A statue of Civil War hero and abolitionist Col. Hans Christian Heg in Madison, Wisconsin, was the latest to fall victim to the wave of vandalism and destruction across the country driven by protests over the death of George Floyd. A noted abolitionist, immigrant, and leader of a Wisconsin anti-slave-catcher militia, Heg gave his life in the Battle of Chickamauga to end slavery.

In a vision where the past is open to revision, protesters have begun attacking those that embody America’s highest values.

The toppling of Col. Hans Christian Heg’s statue is just another in a string of incidents across the country caused by protesters who seek to eradicate racism by destroying history. Initially in response to the slaying of George Floyd, these protests have spiraled into vandalism and the tearing down of Confederate statues. In recent weeks, protesters have moved on to tearing down and defacing statues of not racist, white supremacists, but noted abolitionists and champions of civil rights. In a vision where the past is open to revision, protesters have begun attacking those that embody America’s highest values.

The attacks on abolitionists began in late May with the statue of lifelong abolitionist Matthias Baldwin’s statue in Philadelphia being defaced with labels “colonizer” and “murderer.” Statues of former Presidents Ulysses S. Grant, Abraham Lincoln and even George Washington have been torn down or faced strong calls for removal. While they are all complicated figures, these great men embody the best in our country.

Lincoln signed the Emancipation Proclamation and 13th Amendment. The former’s enforcement was just recently celebrated on Juneteenth. As a general for the Union, and later as president, Grant used the full power of the Army to fight the Confederacy and later, the Ku Klux Klan. His stewardship of the Ku Klux Klan Act helped reinforce Reconstruction and put hundreds of KKK members behind bars. George Washington led us to independence and fought to make a country that upholds the truth that all men are created equal. Each of these men embody the fundamental American values of equal rights and liberty for all.

The destruction of these statues does more than just tarnish the legacies of these great leaders. It is an attack on what we value as Americans. If abolitionists and presidents who devoted their entire lives to fighting for equal rights aren’t safe from the mob, who is? Now immigrants like Heg, who believed in the American Dream, are under attack. Despite fighting for racial progress in the Civil War, his statue is supposedly a sign that “we’re moving backwards” which “doesn’t need to be here until we’re ready to move forward,” according to local activist Ebony Anderson-Carter.

The protesters have shown their hand. These protests and calls to tear down statues are no longer about confronting our racist past; they are about tearing down America as we know it. Where does the buck stop? To these protesters, historical figures who believed in egalitarian principles, were lifelong advocates for abolition, and were committed to racial equality still are not enough. In a blistering piece in the Independent, the toppling of Grant’s statue was defended because “protestors knocking down statues today are trying to get the American public to confront our legacy of racism.” Grant’s legacy is reduced to making a point, and not a very good one at that. This just proves that to have literally gone to war against the Confederacy — the epitome of white supremacy in their eyes — is not yet anti-racist enough for protesters.

How many statues of champions of equal rights must fall before they are satisfied? Every last one, it would seem. Black Lives Matter organizer Shaun King called for the toppling of Jesus statues as a “gross form of white supremacy.” Even someone as committed to equal rights as Jesus is untenable to the organizers of these protests. The madness will eventually end, but who knows how far it will go. One thing is for certain: we must stand up for our statues if we are to truly stand up for American values.