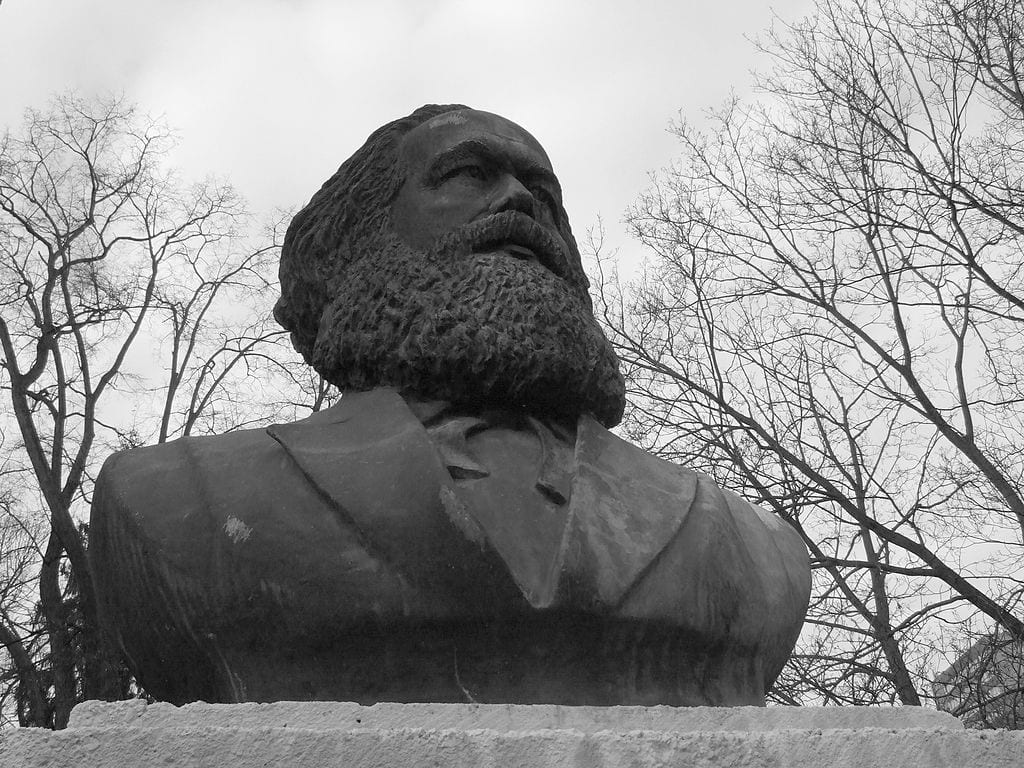 I recently wrote about the Karl Marx bicentennial birthday bash being celebrated throughout 2018 at Carnegie Mellon University. There, at an annual tuition cost of $61,541 (not including room and board), students can bask in lectures like “Why Marx Now,” “How Marx Now,” and the utterly unmissable “The Politics of Everybody: Feminism, Queer Theory, and Marxism at the Intersection,” all compliments of CMU’s Dietrich College of Humanities and Social Sciences.

Well, not to be outdone by CMU, the comradely guys and gals at New York University’s Tisch School of the Arts are celebrating a “Karl Marx Festival: On Your Marx” this October. There, at an annual tuition cost of $56,924 (again, not including room and board), these champions of the Proletariat are underscoring a few odder qualities of Marx for the 21st century.

This Marx is a departure from the Carnegie-Mellon Marx. The NYU Marx is Performance Artist Marx, Non-Binary Marx, Gender-Fluid Marx, as attested by the “art” work used to promote “On Your Marx,” particularly a bastardized composite of Karl’s bearded head atop a naked manikin or some such nonsense. This Contorted Marx appears to be striking a tortured ballet pose (click here for photo).

That particular promo is for tonight’s (Thursday, October 25) Marx event at the Tisch School, called “On Your Marx: Labor, Aesthetics, Identity,” which readers of The American Spectator will not want to miss if they happen to be in New York.

When mere photoshopped “artistic” creations of Twisted Marx don’t adequately convey the intentions of the “performers,” the Tisch School players go for the real deal. One such spectacle is a bizarre Marxist tribute dubbed the “Ivo Dimchev: P Project,” done by Bulgarian choreographer and “performance artist” Ivo Dimchev. The promo shows two men embracing and kissing aside a freaked-out clown or fiend or tormented soul of some agitated sort (click here for photo). This is Masochist Marx.

The promo for Ivo-Dimchev-P-Project Marx carries a mild parental guidance warning: “This piece is recommended for ages 16+.”

Conveniently, that would allow 100% of NYU students to attend and be enlightened, from freshmen to seniors.

If you couldn’t join the dancers for Dimchev’s Marx, you could have hopped and bopped to the “Marxist DJ Dance Party” on October 19. “This birthday party will feature DJ AndrewAndrew spinning the finest Marxist tracks,” stated the Tisch School promo, “plus readings from the masterworks Das Kapital and The Communist Manifesto.”

If you missed still all of those, you might be able to catch this Friday evening’s presentation, “Courtesy the Artists: Popular Revolt,” which incomprehensibly asserts:

As we free fall into fascism, let’s imagine alternative moves. In this collectively produced performance, the assembled performers take socialism as a “fake it ’til you make it” proposition. Courtesy the Artistsforms a working group out of theater, video and music makers to produce a contemporary, in-process variety show that includes the audience in a conversation about what we hate about today, and what we it to be like tomorrow. Using open source video technology in combination with office software, Popular Revolt addresses an increasingly distracted public with the riotous, rebellious power of liveness.

Judging from the description of this event, and the pictures of the dour “performers,” this one looks like Angry Marx.

Finally, NYU’s “On Your Marx” fest wraps up in splendid crescendo this Sunday with “Choral Marx: Manifesto for the Communist Party in Eight Movements.” Of course, Beethoven only needed four movements, but leave it to this bellowing, bloviating 19th century German — that is, Karl Marx — to be regaled with double that number by his court composers. Musical Marx.

In all, this is Mad Marx, or Marxist Madness, on display at NYU. For a tuition charge of $56,924 smackers a year, these fighters for social justice, these glorious guardians of the working man, who preach income equality and redistribution of the wealth, will teach your kids that capitalism rips them off.

And needless to say, if you write checks to NYU, you are getting ripped off, and you need to be making phone calls and sending emails right now.

Then again, perhaps all is not in vain with NYU’s Marx festival. The Tisch School is remembering Karl Marx with precisely the kind of sophistry and insanity his ideas deserve.