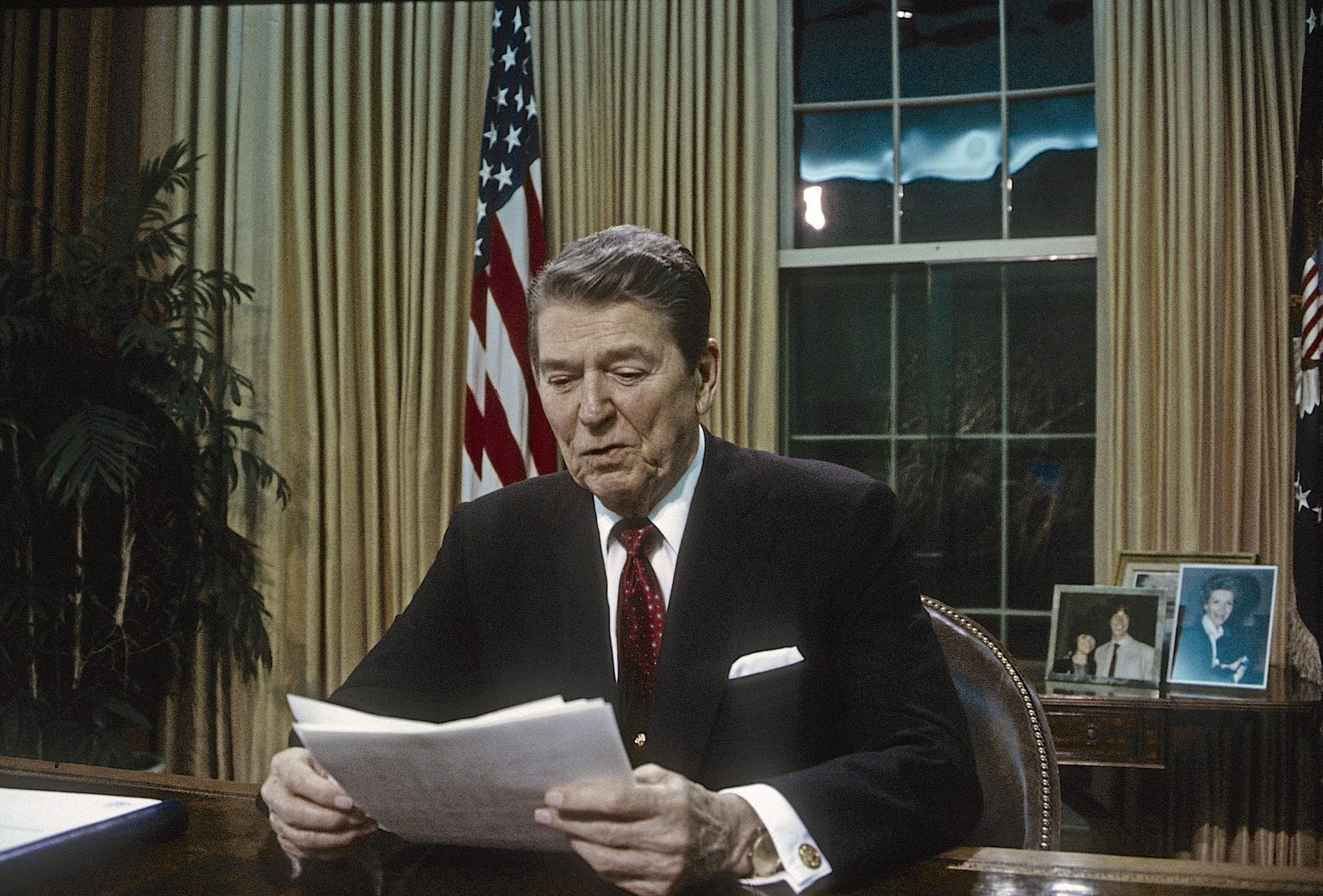 There’s a provocative article by NYU professor Tim Naftali in the Atlantic titled “Ronald Reagan’s Long-Hidden Racist Conversation With Richard Nixon.” It reports an insulting statement made by Gov. Ronald Reagan to President Richard Nixon in October 1971. Naftali lays out the context and the exchange:

The day after the United Nations voted to recognize the People’s Republic of China, then-California Governor Ronald Reagan phoned President Richard Nixon at the White House and vented his frustration at the delegates who had sided against the United States. “Last night, I tell you, to watch that thing on television as I did,” Reagan said. “Yeah,” Nixon interjected. Reagan forged ahead with his complaint: “To see those, those monkeys from those African countries — damn them, they’re still uncomfortable wearing shoes!” Nixon gave a huge laugh.

The statement is bad. No question. As you can imagine, it’s getting a lot of traction among race-obsessed liberals who discern white-hooded “dog whistles” in endless remarks from Republicans but can’t find space within their mental-ideological makeup to even mention something as shameful as, oh, Margaret Sanger’s May 1926 speech to the Silverlake, New Jersey, women’s chapter of the KKK, or any number of racially offensive zingers from a President like Lyndon Johnson or Woodrow Wilson. Their hypocrisy never ceases to outrage.

Make no mistake: They will never let Ronald Reagan escape this one. This line will be hoisted on a progressive petard as an eternal symbol of his views on race. Liberals will apply it unforgivingly and uncharitably in a manner they’d never do with their Democrat pals.

That said, as a Reagan biographer and historian, one who has published eight books and countless articles on the man, I’ve been asked to respond. What to make of this? How to interpret it?

To begin with, I personally cannot defend that statement. It needs to be condemned, certainly as written.

It’s very important to know, however, that Ronald Reagan was not a racist. This is the only — and I mean only — statement that I’ve ever read from him like this (and I’ve read just about everything). It’s so out of the norm that I find it hard to believe. Unlike nasty statements from the likes of LBJ and Harry Truman and Woodrow Wilson or even from Hillary Clinton (who jokes of Cory Booker and Eric Holder: “I know, they all look alike”) and Bill Clinton.

Naftali himself concedes, “Reagan’s racism appears to be documented only once on the Nixon tapes, and never in his own diaries.”

Why did Ronald utter this on this one occasion, which was completely out of character for him amid a very public life in which we have billions of on-the-record words from him, including thousands of private letters? Naftali says that Reagan was angry and frustrated in this instance, and thus expressed himself in a way that was insensitive and offensive. He says that Reagan “vented his frustration at the [African UN] delegates who had sided against the United States.”

I can’t say that I fully agree with that interpretation. I’ve carefully listened to the audio multiple times. Reagan doesn’t sound angry at all. It sounds like he might be mocking a racist stereotype. I honestly can’t tell for certain. Given that Reagan never spoke this way, and didn’t think this way, one ought to be inclined to give him the benefit of the doubt. (Click and listen for yourself. The comment comes around the halfway point of a 12-minute conversation.)

To repeat, Ronald Reagan was absolutely no racist. This can be demonstrated at length in actions and statements literally from the time of his childhood. There are so many actions and statements that I’ve considered doing a book on Reagan and race, simply to show how unusual he was for his times — i.e., there wasn’t a racist bone in his body. I have a box, stuffed with folders, labeled “Reagan and race.” It’s loaded with examples that show Reagan to have been completely against racial prejudice and highly supportive of black Americans and their struggles, especially black actors in Hollywood when he ran the Screen Actors Guild. The problem, frankly, with responding to charges like this in a single article is that you just can’t begin to sufficiently respond, especially when the jury is packed with emotional liberals who want to see a racist under every Republican bed. Where to start? Where to end?

“I’ve lived a long time,” President Reagan told the National Council of Negro Women at the White House in July 1983, “but I can’t remember a time in my life when I didn’t believe that prejudice and bigotry were the worst of sins.”

He meant that literally. Racism, to Ronald Reagan, was a sin. Reagan learned that at home, as a boy, from his devout Christian mother and from his father.

Any Reagan biographer can tell you of an anecdote from a cold evening in Dixon, Illinois, in the early 1930s, when a young “Dutch” Reagan brought home two African American teammates from his college football team. The boys, William Franklin “Burgie” Burghardt and Jim Rattan, had been denied access to a local hotel because of the color of their skin. Burgie was Reagan’s best friend on the team; he played right next to Reagan on the offensive line. Reagan assured them they would be welcomed at his home. The two boys weren’t so certain. Sure, their friend seemed like an amiable guy, but these boys knew what it was like to be black in those days of rampant discrimination. Would the parents of this nice kid, Dutch, be as kind as he was?

“Come in, boys,” said Reagan’s mother, Nelle, with a warm smile as she greeted the boys. They spent the night. I doubt that the typical home in America was like that. The Reagan home was.

“She was absolutely color-blind,” said Reagan of his mom, recounting the story. “These fellows were just two of my friends. That was the way she and Jack [Reagan’s father] had always raised my brother and me.”

Ronald Reagan had learned racial, ethnic, and religious tolerance from his parents. It had been part of him since his early childhood.

While this anecdote about the two young black men, of which many more could be given from Reagan’s rich life and experiences, reflects Reagan’s hatred of racism, it also underscores his respect for the inherent humanity of all people, regardless of their skin color, their ethnic background, their religious beliefs. For Reagan, these were matters of basic human dignity.

I promise you that I could go on and on with heartwarming stories of Reagan’s love and kindness toward African Americans. There was his relationship with the likes of celebrities from Muhammad Ali to Rosie Grier to Meadowlark Lemon, to name only three off the top of my head. I could name names you’ve never heard of, with stories that would make you cry — Reagan and Rudy Hines, Joe Bullock, Willie Sue Smith, Mildred Jefferson. Again, there are too many to adequately describe here. These are touching relationships that few self-righteous liberals or any of us have experienced.

Even in his Evil Empire speech, famous for calling out the USSR, Ronald Reagan paused to call out his own country, the United States of America, for its past sins of racism.

“There is sin and evil in the world,” said Reagan, “and we’re enjoined by Scripture and the Lord Jesus to oppose it with all our might.” That applied, he said, to “our nation,” which had a “legacy of evil with which it must deal…. There is no room for racism, anti-Semitism, or other forms of ethnic and racial hatred in this country.”

This wasn’t something that Reagan was expected to say in a foreign-policy speech. He expressed it because he felt it, he believed it.

Ask anyone who knew Ronald Reagan and they will tell you that he was not a racist, period.

As for the author of the piece in the Atlantic, Tim Naftali, he deserves some criticism, not for reporting this remark from Reagan, but for how, in turn, he thus speaks conclusively of “Reagan’s racism” (a phrase he used twice), as if this one comment can allow us to judge Reagan as a whole and as a person. The fuller picture of the man shows the opposite. In fact, I would advise Naftali to be careful about constructing such a standard. Naftali, a biographer of John F. Kennedy, notes, “As I write a biography of JFK, I’ve found that this sort of racism did not animate President Kennedy.”

Naftali seems to have chosen his words carefully there, prompting me to ask him here: Has he encountered racially offensive remarks from JFK? Or other Kennedy family members?

Hey, I like JFK, too. Naftali better be careful, however. He may well come across something similar from the annals of the Kennedy clan that he doesn’t like — and far more than one example. Liberals create such standards to apply them mercilessly to Republicans, not realizing that such standards will come back to bite them when they find untidy skeletons among their progressive icons. This they learned with their black-face campaign. Beware the Democrat, dear progressive, who donned black-face.

As for Reagan, it is really unfair to take one statement from a man’s past — one that goes against every statement he ever made about black people — and try to argue that it makes him a racist, especially when the man is no longer alive to explain the remark. It’s a bad remark, but it’s far from the total picture. It’s like looking at Harry Truman’s offensive statements about Jews (more than one of those) and ignoring his wonderful work ensuring that America recognize the new nation of Israel, which Truman pursued against his entire cabinet. (For a genuinely ugly track record of statements and actions against Jews and a homeland for them in Palestine, see Franklin Roosevelt.)

To liberals, I say this: Don’t be hacks. Don’t smear a decent man and his long life of decency, including on race, because he’s a Republican and not one of your Democrat buddies. Have the decency to treat a decent man with decency.

To Reagan admirers, I say this: Let your hero — a man who is a human being, not without sin — take his falls. No one is perfect. Ronald Reagan wasn’t, and this remark from October 1971 certainly seems like it’s probably an indicator of that.

Paul Kengor
Follow Their Stories:
View More
Paul Kengor is professor of political science at Grove City College in Grove City, Pa., and senior academic fellow at the Center for Vision & Values. Dr. Kengor is author of over a dozen books, including A Pope and a President: John Paul II, Ronald Reagan, and the Extraordinary Untold Story of the 20th Century, The Politically Incorrect Guide to Communism, and Dupes: How America’s Adversaries Have Manipulated Progressives for a Century.
Most Popular
1
Politics
Staying Sane in a World Gone Mad
by Robert Stacy McCain