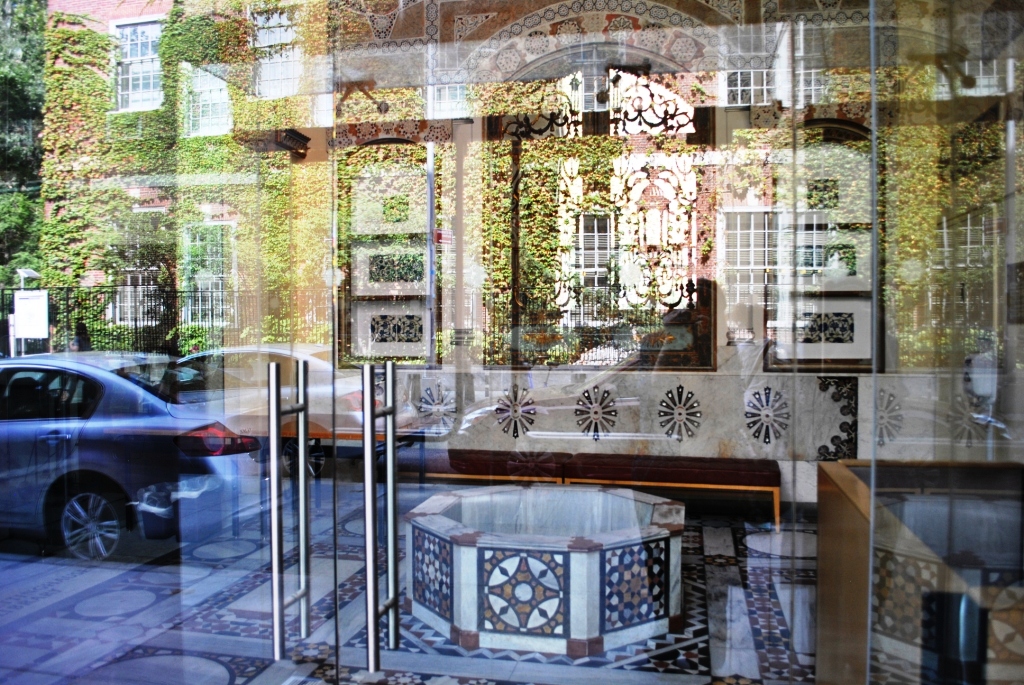 New York University is no longer content to be the second most important anti-Zionist campus in New York City. Columbia University, with its Center for Palestine Studies, has first place locked up. But lately my alma mater has accelerated its anti-Israel activism in an apparent attempt to out-Palestine Columbia, albeit with a cast of lesser-known BDS ideologues.

Columbia has earned the appellation “Ramallah on the Hudson,” but NYU is working overtime to become the Gaza of Greenwich Village.

At the core of NYU’s transformation is the Hagop Kevorkian Center for Near Eastern Studies, the central hub connecting over a dozen other departments, initiatives, projects, centers, and clubs that demonize Israel and rationalize Palestinian and Iranian atrocities.

The Kevorkian Center seems to have united the entire NYU arts and humanities complex into an institution that inculcates hatred for Israel, advocates for Palestinians, and teaches skepticism of American greatness.

Among the Kevorkian associates are the Middle Eastern and Islamic Studies Department, the Social and Cultural Analysis Department, the Skirball Center for the Performing Arts (and its “Practitioners in Residence” associates), the Iranian Studies Initiative, the NYU Abu Dhabi Institute, NYU’s chapters of Students for Justice in Palestine (SJP) and the Jewish Voice for Peace (JVP), NYC Solidarity with Palestine, NYU Out of Occupied Palestine, and Israel Apartheid Week. Another associate, the Steinhardt School of Culture, Education, and Human Development, employs noted anti-Israel activist Helga Tawil-Souri and Hamas/Hezbollah apologist Arun Kundnani.

Each ally contributes its own special approach promoting Palestinianism and denigrating Israel, applying its own field-specific veneer of scholarship and just the right jargon to seduce young minds.

Three individuals stand out from the crowd of Palestinophiles at NYU responsible for this metamorphosis: Zachary Lockman, Andrew Ross, and Ali Mirsepassi.

As chair of the Department of Middle East and Islamic Studies, and former president of the Middle East Studies Association (MESA), Zachary Lockman wields a great deal of the negative influence at NYU. Lockman has stacked his department with a gaggle of post-colonialists and grievance-mongers; 25 out of 39 are Hagop Kevorkian faculty members. Try though I did, I was unable to find a single faculty member with anything positive to say about Israel, the only democracy in the Middle East.

Lockman himself is an apologist for Palestinian terrorism who argues that BDS activists connected to terrorist groups have a right to speak in the United States. He scorns those (as he did me) who believe that preventing them from coming here is common sense. Lockman writes for the wildly one-sided Middle East Research and Information Project (MERIP), which specializes in exaggerating Israeli and ignoring Palestinian aggression, and he edits the project’s Middle East Report. In one particularly arrogant MERIP article, Lockman belittles Martin Kramer’s groundbreaking study Ivory Towers on Sand (2001) as “shallow and tendentious.” Lockman isn’t qualified to carry Martin Kramer’s bookbag. Martin Kramer has forgotten things Zachary Lockman will never know.

Andrew Ross began his career as an English professor and now chairs the Department of Social and Cultural Analysis. He has written on a variety of topics but has lately turned his attention to promoting Palestinianism and belittling Israel. His latest book, Stone Men: The Palestinians Who Built Israel (2019), combines his disdain for capitalism, working-class-hero rhetoric, and keen hatred of Israel. Among his more obtuse complaints is that Israel unfairly “prohibits [Palestinians] from using dynamite” in the stone quarries. I can’t imagine why.

Ross, a frequent speaker at NYU’s annual Israel Apartheid Week, is a board member of the U.S. Campaign for the Academic and Cultural Boycott of Israel. When he decided that the BDS “progress” at NYU was insufficient, he forced a vote in his department’s last meeting of the 2018–19 academic year that prohibited cooperation with NYU’s Tel Aviv campus. It was pure virtue signaling since his department has no ties to the Israeli campus.

In his writings and interviews, Ross advocates for “reparative justice,” by which he means forcing Israel to yield to Palestinian demands for the “restoration of lost property, compensation for decades of moral suffering, [and] the right of return.”

Like Lockman, Ross has loaded his department with anti-Israel ideologues, including Lisa Duggan, the American Studies Association president who invited Noura Erakat to speak at NYU, and Crystal Parikh, who blocked a student’s request for a pro-Israel speaker to counter Erakat’s talk. When one of Ross’s newly minted Ph.D. graduates, Andrew Thrasher, spoke at the 2019 graduation ceremony and praised his campus’s BDS efforts, NYU president Andrew Hamilton was compelled to issue an apology.

Ali Mirsepassi, the third member of NYU’s terrible triumvirate, was until recently director of the Kevorkian Center and still directs its Iranian Studies Initiative (ISI). Mirsepassi earned a bachelor’s degree in political science from the University of Tehran in 1974, and graduate degrees from American University, beginning in 1980. He has written several books on democracy in Iran, which makes him a fiction writer. He may as well write books on the Loch Ness monster and Bigfoot. Mirsepassi too has populated the ISI with people dedicated to a single vision: normalizing relations with Iran, defending the disastrous Obama nuclear deal (the JCPOA), and downplaying the horrors of the Ayatollah Khomeini’s 1979 Islamic Revolution. The ISI hosts events that promote dubious scholars like Hamid Dubashi, the Hagop Kevorkian Professor of Iranian Studies at Columbia University. It also lists as a “practitioner-in-residence” Trita Parsi, Barack Obama’s Iranian adviser and academia’s chief cheerleader for the JCPOA.

Through its network of allies, the Kevorkian Center promotes anti-Semitism disguised as “support of the many communities that are marginalized or stand at risk from various forms of oppression such as racism and xenophobia, Islamophobia, and punitive government policies.”

A brief sampling of Kevorkian activism exposes its one-sided version of history. For instance, in 2018 it sponsored a “theatrical experience” titled The Siege, billed as “a passionate retelling of the story of the 2002 siege of Bethlehem’s Church of the Nativity,” claiming that “armed Palestinian fighters … were given sanctuary” at the church and were subsequently seized by the IDF. In reality, it was Palestinian fighters from Hamas, Tanzim, and the Al-Aqsa Martyrs Brigades who seized the church, held the people there hostage, stole artifacts, and treated it like their own personal PLO latrine, even using Bibles as toilet paper.

In 2018, the Kevorkian Center held a panel discussion titled “The Assault on the Right to Boycott,” and in 2019 it co-hosted a lecture with the Skirball Center featuring Linda Sarsour speaking on “Migration, Refugees, and the Politics of Sanctuary.” Sarsour’s anti-Semitism is so widely recognized that the Women’s March movement she started dumped her and Joe Biden was embarrassed that she spoke at the Democratic Convention … sort of.

NYU’s motto, Perstare et praestare, means to persevere and excel, but to what end is it persevering and in what exactly is it excelling? The Kevorkian Center seems to have united the entire NYU arts and humanities complex into an institution that inculcates hatred for Israel, advocates for Palestinians, and teaches skepticism of American greatness. It is the eye of a perfect storm of ahistorical historians and “Palestine” cheerleaders, abetted by an administration that thinks Palestinian activism is a bonus, and feeding off the apparent indifference of the millionaire donors who run the Tisch, Sterne, Loeb, and Bobst fortunes. Synergy.

One predictable outcome of NYU’s miseducation was on full display last spring, when a new NYU graduate named Leen Dweik (a Middle Eastern and Islamic Studies major according to her Buzzfeed article last year criticizing Chelsea Clinton for insufficient “wokeness”), showed her indifference to the death of Israel’s first coronavirus victim. After 88-year-old Holocaust survivor Aryeh Even succumbed to the virus, Dweik tweeted, “anyway should i paint my nails red or green today.” The remark was so egregious that NYU spokesman John Beckman issued a condemnation, calling Dweik’s vile social media performance “shameful and callous.”

NYU’s transformation has taken years to get this far, and its progress on the road to becoming the Gaza of Greenwich Village won’t be arrested without “resistance” (to use a favorite term of today’s Left). NYU’s statement about Leen Dweik’s vile behavior and apology following Andrew Thrasher’s comments at the 2019 graduation indicate that the administration will respond to public criticism. A concerted effort of alumni, parents, concerned New Yorkers, and the Department of Education might slow NYU’s regrettable slide into activism. The Kevorkian Center is a beneficiary of Title VI funding, meaning that it is supported not only by tuition-paying parents but by everyone who pays taxes. If decent people everywhere let NYU’s president (andrew.hamilton@nyu.edu) know they don’t approve of the ways NYU is spending their money, he might listen. Money talks.

The Kevorkian Center currently stands at a threshold. On June 12, it announced on Twitter that Ali Mirsepassi was stepping down as director and that Jared McCormick, director of graduate studies, was temporarily assuming the role of acting director. I was told by the Center’s Communications and Program Administrator that a full-time director would be appointed soon.

The chances are almost zero that the new director will be someone inclined to treat Israel objectively and historically. NYU’s selection likely will be another anti-Israel Palestinophile.

It wasn’t always this way at NYU. Or at least it didn’t seem so. When I was a graduate student there (1985–95), it would have been unimaginable for the administration to confer a President’s Service Award to the hate group Students for Justice in Palestine (SJP) for “extraordinary and positive impact on the University Community,” but that’s exactly what happened last year. In response to that disgrace, Judea Pearl, father of Wall Street Journal reporter Daniel Pearl, who was murdered by Al-Qaeda’s Khalid Sheikh Mohammed, renounced his status as a distinguished alumnus of NYU. Since I am not a distinguished alumnus, I cannot make such a gesture. I can only proclaim my embarrassment and shame at what NYU is becoming: just another beast in the anti-Semitic, anti-Israel academic herd.

One look at the Hagop Kevorkian Center’s plans for the fall 2020 semester shows that grim reality. Through a series of events glorifying “resistance,” “protest cycles,” “digital dissent,” and “revolution,” NYU will spend the next few months challenging Columbia University for that coveted first-place position as the most important anti-Israel campus in New York City, well on its way to becoming the Gaza of Greenwich Village.

Competition for the most anti-Israel university is fierce. Brown University just named a chair of Palestinian Studies after PLO poet Mahmoud Darwish, and Harvard University just hired the PLO’s Saeb Erekat to mentor graduate students. To win this game, NYU may have to offer the director position to a Hamas leader like Ismail Haniyeh or Khaled Mashal. Either one could teach one hell of a seminar on “resistance.”

A.J. Caschetta is a principal lecturer at the Rochester Institute of Technology and a fellow at Campus Watch, a project of the Middle East Forum, where he is also a Ginsburg-Milstein fellow.