Brown University, the Ivy League college founded in 1764, is the latest high-profile academic institution to go all in for Palestine, a country that does not exist. Columbia University’s Center for Palestine Studies, a Ramallah on the Hudson, still occupies first place in excusing Palestinian violence, exaggerating Israeli responses to Palestinian terrorism, and inculcating new generations of BDS ideologues. But Brown has just upped the ante by endowing America’s first-ever chair in Palestinian Studies.

This is not merely a symbolic gesture, but a significant commitment, hailed in the press as a “milestone” and proclaimed as Palestinians “Finally getting a place at the academic table.” Brown’s Watson Institute for International and Public Affairs, its Center for Middle East Studies, and its New Directions in Palestinian Studies research initiative will now collaborate in a synergistic venture, spending money and hiring teachers to indoctrinate students and “inform the community” about the evils of Israeli colonialism, while stamping its imprimatur on the virtues of the Palestinian cause. Call it the Providence Front for the Liberation of Palestine.

The new position is named for Palestinian poet Mahmoud Darwish, whom Brown University calls “a towering and beloved figure of Palestinian and Arab literature and humanistic values.” Humanistic values?  Mahmoud Darwish was many things, but a humanist he was not. As a member of the Palestine Liberation Organization (PLO), he wrote and edited its monthly journal and served as director of its research center. He was also the author of the Palestinian Declaration of Independence. In the picture below he is seated between two of the Palestinians’ arch-terrorists, Yasser Arafat, leader of the PLO, and George Habash, co-founder of the Popular Front for the Liberation of Palestine (PFLP). 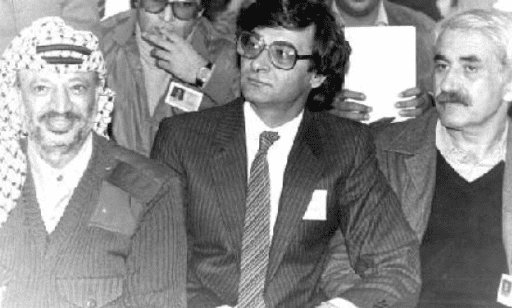 Darwish’s self-indulgent and self-pitying poetry is filled with antagonistic, bellicose imagery. As a prime example, consider his most famous poem, “Identity Card,” which ends with this quatrain:

And yet, if I were to become hungry
I shall eat the flesh of my usurper.
Beware, beware of my hunger
And of my anger!

Has the Ivy League so completely rewritten the history of humanism that Darwish’s poetic invocations of cannibalistic murder are now hip and cool beyond a Palestinian audience?

The first person to hold the new Mahmoud Darwish Chair in Palestinian Studies is Beshara Doumani, who started his academic career at the University of Pennsylvania after completing a Ph.D. at Georgetown University in 1990. From there he went to the University of California, Berkeley, and then to Brown in 2012, where, as the Joukowsky Family Distinguished Professor of Modern Middle East History, he launched the New Directions in Palestinian Studies (NDPS), “an international community of scholars dedicated to decolonizing and globalizing this field of study…. [and] to shape the agenda of knowledge production on Palestine and the Palestinians.”

Under Doumani’s supervision, the program “hosted the first and only endowed post-doctoral fellowship dedicated to Palestinian Studies” and “launched with University of California Press the first and only book series dedicated to Palestinian studies.” Its online research guide leads one to such wildly unreliable sources as the MERIP and The Journal of Palestine Studies. It’s probably just a matter of time until Mondoweiss and the Electronic Intifada are added to the list.

Doumani’s bio page describes him as “a public intellectual who writes on current events in the Middle East, on the ethics of knowledge production, and on the relationship between culture and politics.” He’s also a dyed-in-the-wool BDS-er — though on several occasions, Doumani was criticized by for being too “balanced” when it comes to his anti-Israel activities, prompting him to issue mea culpas.

For instance, in 2014 Brown’s Middle East Studies program co-sponsored a lecture by Yehuda Yaakov, the Israeli consul general in Boston. Yaakov was deemed unacceptable by the Palestinian Campaign for the Academic and Cultural Boycott of Israel (PACBI), which forced Doumani to backtrack and explain that he simply allowed the logo of the Middle East Studies program to be used, adding that “These were not events that we in any way initiated, organized or attended.”

Then, in 2015, Doumani participated in a seminar titled “The Humanities in Israel/Palestine: Reflections on the State of Knowledge” at Brown’s Cogut Center for Humanities. But the anti-Israel mob saw a problem: scholars from the Minerva Center for the Humanities at Tel Aviv University participated, and, to the purists, no Israelis are allowed. Once again, the PACBI cracked the whip, and Doumani got back in line, insisting that he had only been “verbally” invited and assuring everyone that there was “no institutional connection” with Tel Aviv University. The Electronic Intifada chided him and Brown for not having “done a bit more due diligence.” Now that Doumani is in charge of Brown University’s Palestinian advocacy, no doubt he will not repeat his earlier lapses.

At a time when the foreign policy of the U.S. and much of the Arab world has diminished its support for the so-called “Palestinian issue,” (a euphemism in its eighth decade), academia presses on, firmly in the Palestinian corner. Brown University’s effort to out-Palestine Columbia University is just another indication of this trend in higher education. What great institution will next try to out-Palestine Brown and how? Perhaps we will soon see one of them endow a Yasser Arafat Chair.

A. J. Caschetta is a principal lecturer at the Rochester Institute of Technology and a fellow at Campus Watch, a project of the Middle East Forum.