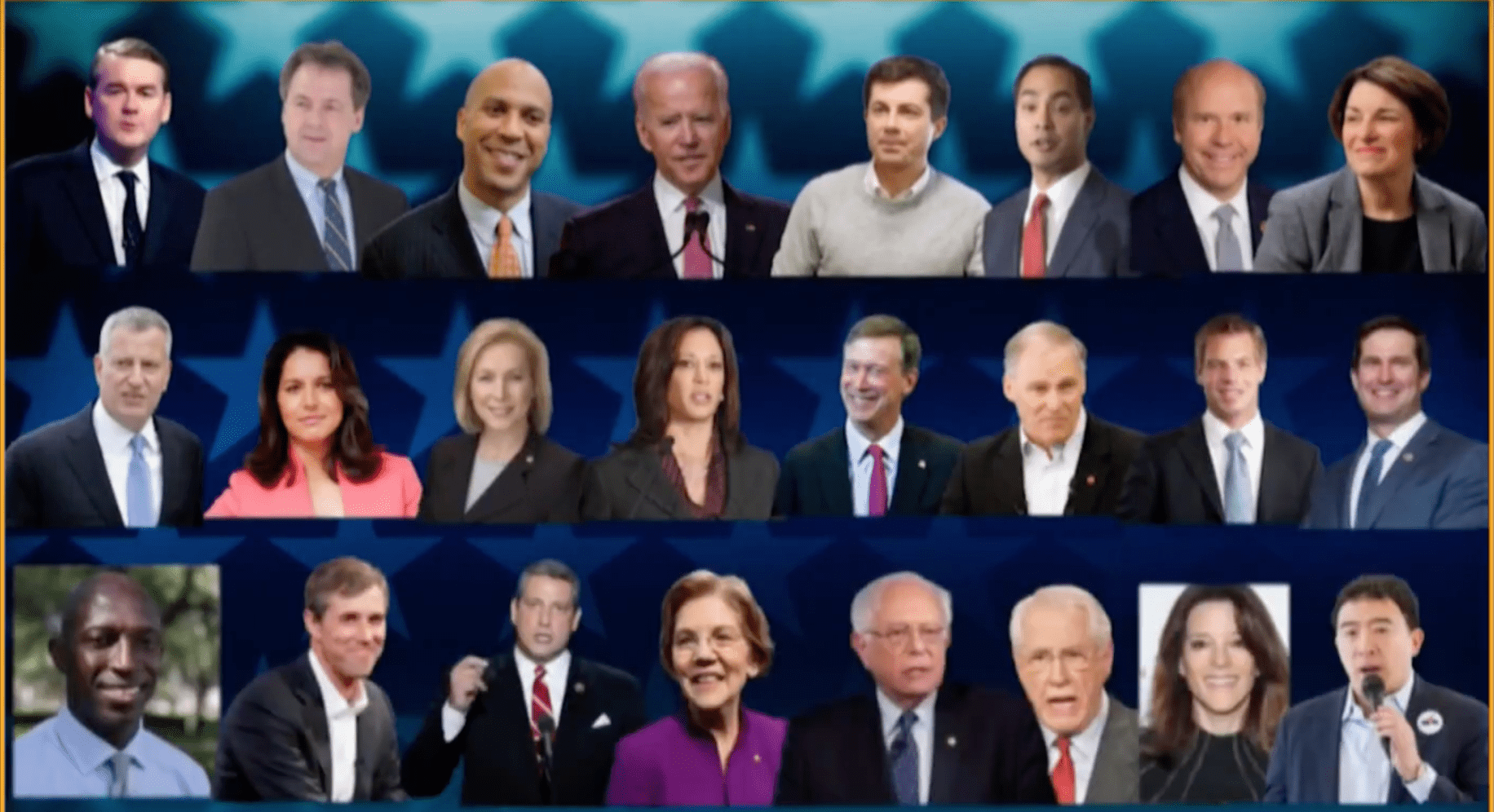 What will happen Thursday night if former Vice President Joe Biden pulls his pants down in public on stage when it is finally his time to speak? I am told that he will have one minute to answer the first question, one minute! Moreover, so will all the other candidates. Apparently there will be a plenitude of one-minute answers whizzing through the Miami auditorium.

What a week this is going to be. For my part I think it will be better for the former Vice President to pull down his pants on stage than to answer whatever his questions might be. His goal will be, I believe, to effect a “breakout moment” for his campaign. That is what the political commentators call it, a “breakout moment.” Such moments are very important when the field is as congested as this one with the candidates limited to one-minute answers. Former governor Jeb Bush should have tried the pants drop back in 2016.

If Joe pulls his pants down on stage Democrats in the audience will remember him above all the other candidates. He will, indeed, have broken out, as the experts say. I am sure of it.

Yet what if on Wednesday night Beto or Cory pull their pants down before Joe gets a chance? Or what if one of the female candidates is competitive in this undraping project? Or perhaps one of the lady senators turns the table on the male candidates and hits a moderator with her handbag? It is not out of the question. Actually, nothing is out of the question this week.

I am told that rumors have been running riot in Washington ever since I took up the subject of the almost two-dozen candidates seeking the Democratic nomination. One of the hottest rumors is that good ole Joe has more tricks up his sleeve. Not only will he pull his pants down, but he will be wearing shorts with a catchy slogan. The catchiest yet is “Vote for Biden, He’s an Item.” Well, I thought it was a little flat too when I first heard it, but I am told it grows on you. Wait until Thursday night.

There have been some complaints from progressive quarters that if Joe pulls his pants off he will not be acting presidential. I think Congressgirl Alexandria Ocasio-Cortez objected. I understand she is the smartest of the freshman Democrats in Congress, and she even carries a copy of her college transcript to prove it along with her driver’s license in the event that bartenders on Capitol Hill doubt her age.

Now Joe’s critics have a point about his pants. No one in the history of this country has ever tried to effect a “breakout moment” during a presidential campaign by removing his pants or even his shirt, though I thought Senator John Kerry was headed in that direction when he ran for president in 2004. Certainly his wind surfing was an effort in that direction and was it also skateboarding? Kerry was a lot of laughs. I miss him.

Now the mainstream media have been very dutiful about keeping us au courant about the Democrats’ efforts to retire President Trump in 2020. I especially liked the Washington Post over the weekend reporting that the “Candidates have been digesting briefing books and consuming hours of old debate footage.” If any of the candidates comes to the debates this week with a mouthful of briefing books and old debate footage I say he or she has gone too far. We must keep things in perspective. “Briefing books” are to be read. “Old debate footage” is to be analyzed. This passage was ridiculous. I think sometimes the members of the media get too close to their subjects.

The media for days now has been speaking of Wednesday and Thursday’s clutter of one-minute answers filling the air in Miami as leading to two nights of “blockbuster ratings.” This I doubt. I am not even certain that I will be in the audience. It sounds like chaos to me whatever Joe does with his pants.

It is unfortunate for the twenty-three Democratic candidates — now twenty-four with a Mr. Sestak from Pennsylvania throwing his hat into the ring — that the President chose last Tuesday to kick off his campaign. He did it in Orlando, Florida, and 20,000 delirious supporters showed up. There were many more outside clamoring to get in. He wowed them for well over an hour. The Democratic candidates are lucky to turn out an audience of a few hundred for their appearances.  On Wednesday and Thursday of this week the Democrats ought to en masse concede.

R. Emmett Tyrrell, Jr.
Follow Their Stories:
View More
R. Emmett Tyrrell, Jr. is the founder and editor in chief ofThe American Spectator. He is the author of The Death of Liberalism, published by Thomas Nelson Inc. His previous books include the New York Times bestseller Boy Clinton: The Political Biography; The Impeachment of William Jefferson Clinton; The Liberal Crack-Up; The Conservative Crack-Up; Public Nuisances; The Future that Doesn’t Work: Social Democracy’s Failure in Britain; Madame Hillary: The Dark Road to the White House; The Clinton Crack-Up; and After the Hangover: The Conservatives’ Road to Recovery. He makes frequent appearances on national television and is a nationally syndicated columnist, whose articles have appeared in the Wall Street Journal, New York Times, Los Angeles Times, Baltimore Sun, Washington Times, National Review, Harper’s, Commentary, The (London) Spectator, Le Figaro (Paris), and elsewhere. He is also a contributing editor to the New York Sun.
Most Popular
1
Hither and Yon
POTATUS Speaks, A Nation Groans
by Scott McKay