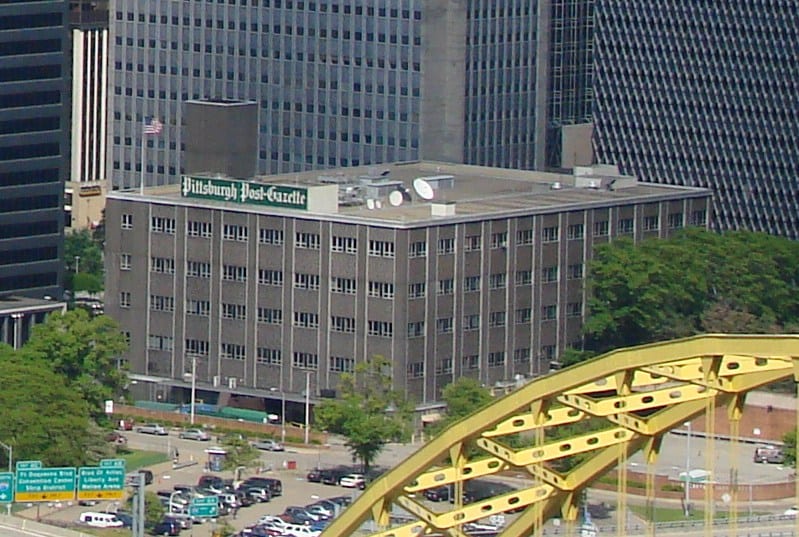 More Politics
Sign Up to receive Our Latest Updates!
Register
Hot Off
The Press
Laughing Matters
AOC and the Recycled Gold Rush
by Itxu Díaz
In Print Spring 2022
The Theft of a Nation: Ukraine’s Fight for Existence
by Matthew Omolesky
Arts and Letters
Broadway Refuses to Call Curtains on Mask Madness
by Grace Bydalek
Another Perspective
The Difficult Search for Answers After Uvalde
by Josh Hammer
Choose Life
Biden, the Abortion Lobby, and Mass Shootings
by Jeffrey Lord

I don’t know Rob Rogers, the just-fired cartoonist for the Pittsburgh Post-Gazette.

As a Pennsylvanian I do know something about the paper. As a resident of Central Pennsylvania, these days I am a reader of Penn Live, the online version of the Harrisburg Patriot-News. But in the long ago and far away, as a campaign press secretary for Pennsylvania’s senior U.S. Senator, the late John Heinz, I was more than aware of the PG. Well aside from reading it daily, I would trail into the paper’s home office with my Senator-boss as he was grilled about his record during election cycles. The namesake scion of one of Pittsburgh’s most famous families of ketchup fame, the conversations between John and the paper’s editors would generally start with the issues of the day and inevitably bleed into conversation about this or that Pittsburgh matter that had the involvement of the Heinz family or fortune. Years later, as a political writer, I myself would be published a couple times in the paper’s Op-Ed columns, notably a few days before the 2004 Bush-Kerry showdown when I tried ever so tactfully to point out that in their occasional interactions on the Senate floor, Senator Heinz had proved right in his foreign policy assessments, Senator Kerry wrong. The article caused a bit of a stir because after the tragic death of Heinz in a plane crash, wife Teresa Heinz had remarried — to Senator Kerry. Ah, life. Pennsylvania went for Kerry, with Teresa’s enthusiastic endorsement.

Now, apparently, the Post-Gazette is in the hands of an owner who is a Trump supporter to some degree. Mr. Rogers, who has been cartooning away at the PG for 25 years, is not. So, out the door he has just gone. Proving yet again that he who owns the media outlet gets to determine what runs in his or her paper or on his or her network. There is nothing abnormal about this. Amazon’s Jeff Bezos, the owner of the decidedly anti-Trump Washington Post, is not expected to turn his paper into a pro-Trump broadsheet, any more than the left-leaning Sulzberger is about to do the same with the virulently anti-Trump New York Times. And, oh, by the way… I seem to recall something along these lines involving myself and CNN.

Fair enough — or unfair enough if one is now fired anti-Trump cartoonist Rogers in Pittsburgh. But there is something else afoot here that deserves a thorough-going repudiation.

Rob Rogers took to the aforementioned anti-Trump pages of the New York Times to vent his anti-Post-Gazette piece. Fair enough again. But as I read, I found one line that was a disturbing illustration of just how seriously disturbing the American Left has become. Here’s the line from the Rogers article:

“Then, early this year, we published openly racist editorials.”

Say what? The Pittsburgh Post-Gazette is now openly racist? Curiously, I followed the link the Times and Rogers had thoughtfully provided. To find this editorial headlined:

Reason as racism: An immigration debate gets derailed

In which the editorial board of the paper said, among other things, this:

Calling someone a racist is the new McCarthyism. The charge is pernicious. The accuser doesn’t need to prove it. It simply hangs over the accused like a great human stain.

It has become not a descriptive term for a person who believes in the superiority of one race over another, but a term of malice and libel — almost beyond refutation, as the words “communist” or “communist sympathizer” were in the 1950s.

Moreover, the accuser somehow covers himself in an immunity of superiority. If I call you a racist, I probably will not be called one. And, finally, having chosen the ultimate epithet, I have dodged the obligation to converse or build. But there are nations that are hellholes in this world.

… We need to confine the word “racist” to people like Bull Connor and Dylann Roof. For if every person who speaks inelegantly, or from a position of privilege, or ignorance, or expresses an idea we dislike, or happens to be a white male, is a racist, the term is devoid of meaning.

We have to stop calling each other names in this country and battle each other with ideas and issues, not slanders.

There was more, but you get the gist.

Here’s the problem with that casual Rogers attribution. (I’d call him Mr. Rogers but that would confuse with another Pittsburgher with the same if more famous renown, a longtime friend of John Heinz, the late Fred Rogers of TV fame.) What Rob Rogers does with that ever-so-casual attribution of racism is illustrate exactly what I have discussed in this space and elsewhere for a long time.

To wit: The American Left has a Culture of Racism that has existed since the Left first appeared in the new United States as a political party — the Democrats — in 1800. For 218 years the party has used racism as its political fuel for its agenda of the moment. Whether supporting slavery, segregation, lynching, the Ku Klux Klan (the party’s “military arm” per historians), or today’s “identity politics” (the latter the son of segregation and the grandson of slavery, as I have also said) — the party is obsessed with judging others by skin color.

It’s Leftist Democratic politicians — serious ones with names like Presidents Woodrow Wilson, Franklin Roosevelt, Bill Clinton, Barack Obama, and the not-quite-President Hillary Clinton — have all made routine use of dividing Americans by skin color to achieve their political objectives of the moment. Wilson segregated the U.S. government, putting hard-core segregationists like Virginia Congressman Carter Glass and North Carolina progressive newspaperman Josephus Daniels in his Cabinet (Glass to push the creation of the Federal Reserve as Secretary of the Treasury, Daniels as the Secretary of the Navy who segregated the Navy). FDR, who boasted of having Klan members as his friends, put one of those Klan pals (Alabama Senator Hugo Black) on the Supreme Court. (From which position Black would write the opinion giving the Court’s imprimatur to the thoroughly racist and unconstitutional creation of camps that interned Japanese-Americans in World War II.) Clinton made a hero out of his mentor, Arkansas segregationist Senator J. William Fulbright — a signer of the racist “Southern Manifesto” opposing civil rights in the 1950s. Obama sat for some 20 years in the pews of the notoriously race-dividing anti-Semitic Jeremiah Wright and spent time with the viciously anti-Semitic Louis Farrakhan, his allies holding on to a smiling picture of the two together to protect Obama until after he left the White House. According to the New York Times, Hillary Clinton based an entire presidential campaign on dividing Americans by race, the Times saying:

Hillary Clinton set out 10 months ago to inspire and energize the Democratic Party, hoping to bring together the rising American electorate of black, brown, young and female voters into a durable presidential coalition.

Which is to say, Clinton, like her party predecessors who depended on race to win elections, was determined to divide by race — “black” and “brown” — not to mention gender. All of this doesn’t even touch the legions of lesser Democratic Party factotums of all races who have made race-card playing their calling card.

In other words? What the Pittsburgh Post-Gazette was saying in the editorial that cartoonist Rogers found so “openly racist” was the old message of Dr. Martin Luther King, Jr. — that Americans should be judged on the content of their character and not the color of their skin. To read that editorial is to hear the words of Abraham Lincoln as noted by historian Doris Kearns Goodwin in her book Team of Rivals in which Lincoln hoped to “‘penetrate the human soul’ until… ‘all this quibbling about this man and the other man — this race and that race and the other race being inferior’” was discarded forever.

The sad truth here is that the American Left is so instinctively wedded to the politics of race that in today’s world, believing in the words of the rare anti-racist Democrats like John F. Kennedy (“race has no place in American life or law”) or Robert Kennedy (“the Constitution must be color blind”), not to mention Dr. King or the Republican Party’s Lincoln, is now seen by far more Leftists than Rob Rogers as…racism.

I confess I hadn’t seen much of Rob Rogers’ cartoons, so I took a bit to do so. It doesn’t take long to see that Rogers is a committed Leftist. He doesn’t just go after Trump. He went after Hillary Clinton — from the Left. He loves Barack Obama. He hates the NRA.

Newsflash? God bless a free press. Maybe the best solution here was to have two cartoonists share the space over the course of a week — one Right, one Left. That’s what’s called an ownership decision. And it is more than fair to point out that as the new owner looked at the map of Western Pennsylvania and, presumably, Eastern Ohio — where between the two (and with West Virginia to the south) the paper has its audience — there was a sea of Trump red.

But whatever else is going on at the Pittsburgh Post-Gazette, Rob Rogers, with that casual line in his New York Times article about an “openly racist” editorial from the paper, illustrates vividly not just that the Post-Gazette is the exact opposite of what he accuses. What Rogers illustrates is just how casually “openly racist” the American Left really is. The goal is as simple as it is ancient: to permanently and perpetually divide Americans by race to gain political power.

As a Pennsylvanian, I am proud to know the Pittsburgh Post-Gazette will have none of this.