by Dov Fischer
Looting at Target in Minneapolis (YouTube screenshot) 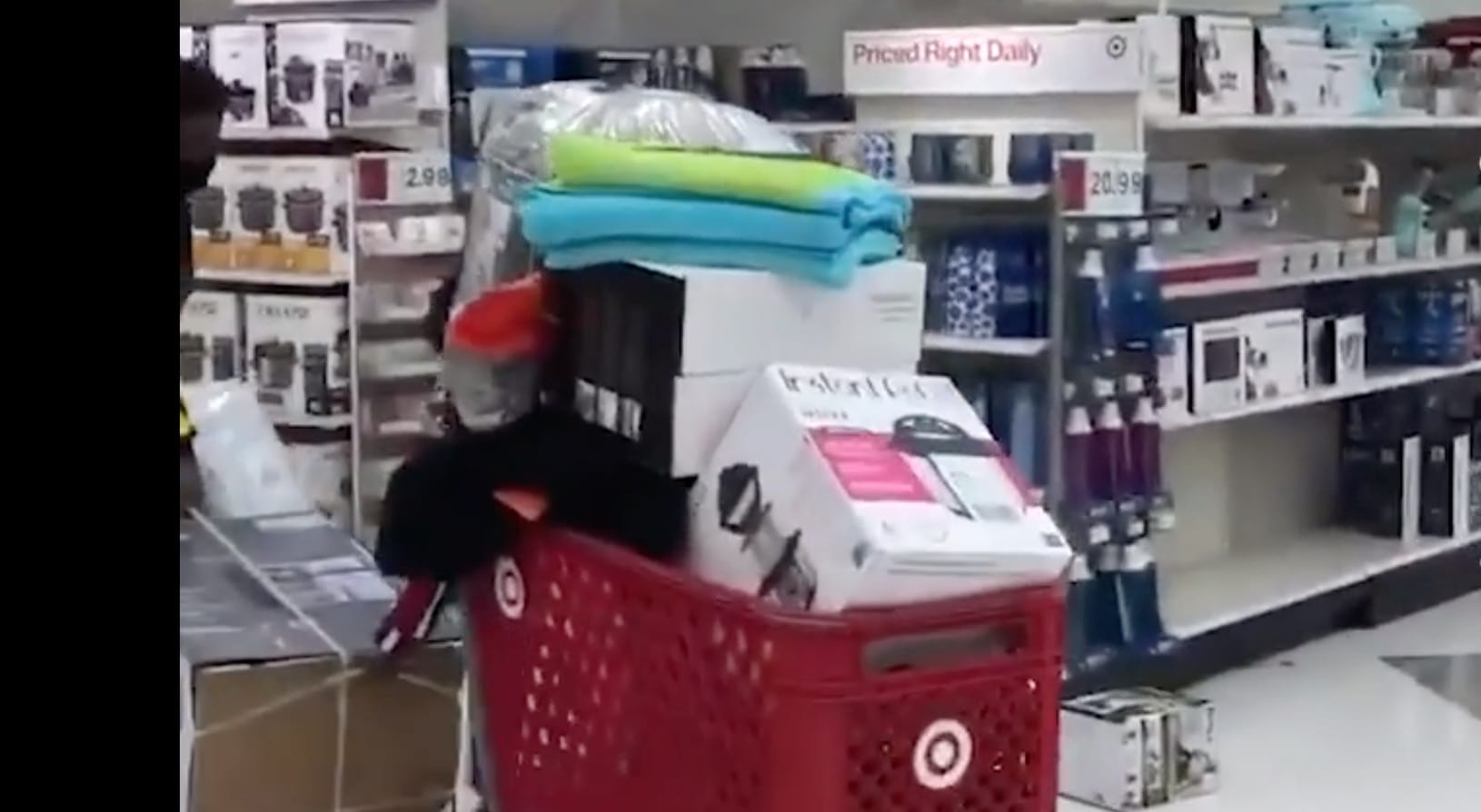 It is a favorite mantra at leftist demonstrations: “No Justice, No Peace.” To engage in constructive dialogue, it is important to hear the other side and to know their rallying cry.

And now for yet another side’s rallying cry: “Nuh-uh, pal. Rather: No Peace, No Justice.”

The ideal of Justice is characterized and epitomized by that blindfolded lady holding balanced scales. That is justice. Justice is blind. Justice is balanced and even. And the lady can spend her time weighing the scales while blindfolded  because she is not concerned that someone will throw a Molotov cocktail at her.

These animals come out on all kinds of occasions. It is not about anger. It has nothing to do with racism or justice. Let there be a devastating hurricane, and the same animals will vandalize, ransack, burn, and steal.

True justice does not come from ransacking stores, burning down neighborhoods, and viciously attacking innocents.

Let this be clear: Those who are burning down stores in Democrat-controlled cities are every bit as evil as the man who stood on George Floyd’s neck. The kind of vicious animal who would torch the restaurant of an innocent African-American family is an evil Satan. The sort who would break a storefront window and ransack the insides of a shop that was built by legal immigrants to America from Mexico is a pig.

The overwhelming lopsided majority of police officers, firefighters, National Guard troops, and other first responders are both righteous and among our society’s very best. Police officers and firefighters are right up there with pastors, priests, and rabbis when it comes to helping people, protecting them, counseling them, and making our country every bit as great as it is. Just as it is news when “man bites dog” but not when dog bites man, so it is news when Derek Chauvin did what he did. Consider: All over America, now for a long time, police patrol while wearing video cameras. Their patrol cars record them. Their body cams show all. Moreover, civilians film them with smartphones and then post the videos on YouTube, Facebook, and Twitter.

There are some 700,000 police officers employed in the United States. Thousands, tens of thousands, hundreds of thousands, millions, tens of millions, hundreds of millions of police calls have taken place since we Americans — rightly — put our cops on video. For example, in 2015 the police had more than 50 million encounters with civilians. And yet one bad apple, Derek Chauvin, stands out. It is like airline safety. How many hundreds of thousands, even millions, of flights go unnoticed — but let there be one Malaysian Airline Flight 370 disappearance, and CNN has all the “news” it needs for Wolf Blitzer, Jake Tapper, Chris Cuomo, Don Lemon, and all the rest of their hacks to report for three years until Donald Trump gets elected president.

If there were any number of cops like Chauvin, do we doubt they would be all over YouTube, CNN, MSNBC, and Twitter? We don’t see daily police misbehavior in the era of the police body cam because the police are good people. They took that job in order to serve, protect, and defend. Those are good things.

But the looters, vandals, and arsonists are the Satans of our society. It is they and their very existence that compels us to recruit, train, and arm police officers in the hundreds of thousands. Those animals breaking storefront windows and setting Target stores ablaze are the lowest evil our society knows. We do not have laws that sufficiently address their evil. Anything short of 20 years’ imprisonment for store vandalism and public mayhem is insufficient.

“No Justice, No Peace?” How in the world does Derek Chauvin’s apparent evil get solved or prevented next time by burning down a neighborhood pharmacy? Who are the animals kidding? Answer: They are kidding no one.

Do not mistake anarchy for anger. Anger is watching a man beg for air while a cop stands on his neck for nearly nine minutes. Fury is learning that the victim died from that. Inconsolable fury would come if such a killer would face no consequences. That is anger.

But on the streets — in crystal-clear contradistinction from the peaceful marchers and from others working overtime within the system to address this disaster and to work to assure that it not recur — the animals are a different breed. Those animals are not angry. They are having the time of their lives. For the anarchists, it is a moment in which to regale and deface and tattoo national monuments like those that honor our fallen World War veterans. This is what the anarchists wait for: the moments when, like the parasites they are, they can deposit themselves within a larger and healthy organism — decent and righteous human beings who are outraged and peacefully demand better — and then the animals, less easily detected, can ignite their fires and wreak their havoc.

It was about Free Stuff.

The places where decent people go when there is injustice include (i) attorneys’ offices, (ii) the halls of justice, and (iii) the offices of elected officials whom we send to the legislature to enact necessary protections. We petition. We write passionately. We speak powerfully. We organize for change.

But where do the animals go? They go to Target, Best Buy, and Nike. This mayhem has nothing to do with George Floyd or Derek Chauvin. Rather, these are their moments to steal a television set. Make that three television sets. Oh, just make it as many TV sets as can be carted away into a waiting vehicle. Time to grab 10 undershirts, no matter the size. And 20 undershorts, no matter the style. A golden moment to steal overpriced LeBron and Kaepernick athletic shoes and, while there, to steal the cash register. And, oh yeah, on the way out, to steal as many sets of shoelaces as can be carried. And then to set the place on fire.

These are the animals of the night. They have nothing to do with George Floyd. They have nothing to do with anger or with protesting injustice. They run rampant every Saturday night in Chicago, murdering another three or five — or maybe an even dozen — Black women and children. Remember all the news about how the New York Times recently listed the names of coronavirus victims? Have you heard similar news that the Chicago Sun-Times lists the names of every murder victim in Chicago, with date, time, and location? Just this past Memorial Day weekend, 50 people were shot and 10 murdered in Chicago. The very next day another 28 were shot in Chicago. A five-year-old girl got shot. A 37-year-old guy got shot while sitting on his porch. Black lives matter? More innocent Blacks get murdered in cold blood every weekend in Baltimore, Chicago, Memphis, St. Louis, and Detroit than will be killed wrongfully in an entire generation and more by isolated despicable bad apples within America’s approximately 700,000 honorable police officers.

Right now, if there is to be justice — and there must be — first there must be peace. Anger is OK. Even if it is true that the gentleman was passing around counterfeit money, decent Americans intuitively grasp the evil that appears to have been done to George Floyd. But mayhem and arson and wanton violence that destroys the hopes, dreams, and livelihoods of Americans of all colors, ethnicities, and creeds is not anger. Rather, it is the way that the very sickest Satans in our society celebrate and party. Here the animals set fire to the personal belongings of a Minnesota homeless man. Here, looters attack other looters to swipe their stealings. Here, they beat the living daylights out of a woman in front of her store as her husband tries to stop them. Put these animals — these sub-human dirtbags — on a scale alongside Derek Chauvin, and ask blindfolded Lady Justice which is worse.

And whom do these dirtbags hurt, as if they even care? They hurt the families of the inner cities, the mom-and-pop store owners, the minorities who open ethnic small restaurants of Chinese, Thai, Korean, Vietnamese, Ethiopian, or Middle Eastern food — because middle-aged-and-older immigrants who come here legally but lack language skills, advanced degrees in higher education, or critical business contacts open such restaurants. That is who gets hurt by the animals, the vandals, the looters, the arsonists. The victim is the person who opens a discount store downtown or a clothing store because that is all they feel they can do to support their families. That is who gets hurt. When downtown Baltimore or Ferguson burns, that is not impacting the bottom line of Exxon, JP Morgan, Raytheon, or Caterpillar.

So if there must be battle lines drawn, and if Americans must take sides, right now the choice is clear: No peace, no justice — first the animals must be stopped.